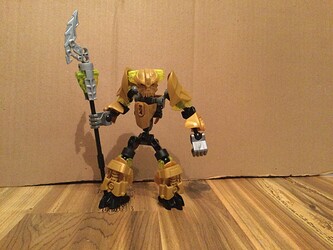 “Greetings gentlemen, welcome to Gateway science, Toas, order of Mata nui agents, Matoros… you’re here because we want the best, so who wants to make some science?” 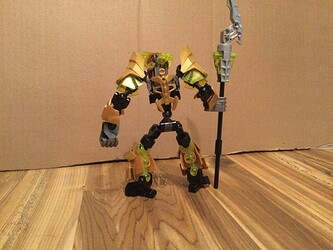 Olmak came from the blood line of a Mask maker who is known for inventing his universe’s mask of dimensional gates and putting its name on it.
Rumors suggested his grand father “Olmak the 2th” gave Artakha plans for the Mask of Dimensional gates and spread the prophecy about the mask of time for some scheme. 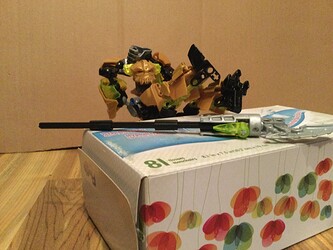 Olmak runs a science facility that is known for researching the Bionicle Multiverse and “the Outside”. there known for creating explosive Thornax fruits and attempting to make it so that the Rah-tans can choose there mutations.
he also owns a mining company that mine elemental crystals from the shadow realm so he could fund his tests. 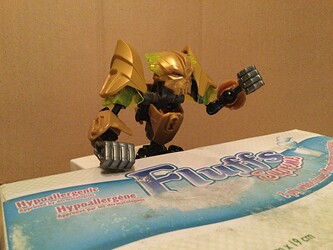 Known to be a bit of a risky mad-lad where is motto is: “science isn’t about why, but why not!”, other wise he is quite charismatic, has a great sense of humor and knows a lot about the time space continuum. 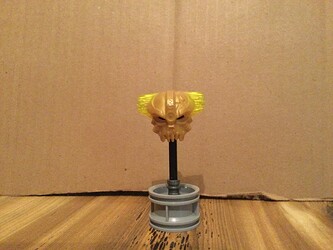 He wears a noble Kanohi Olmak that was passed from many generations
He holds a staff that acts as a Badge of office and secretly has a deadly Thornax launcher.

He is inspired by Jk Simmons’s well known roles such as Cave Johnson from Portal and J. Jonah Jamesson from spider man 2 he is also inspired by other portal characters.

Funny personality. I like his gold and trans-neon green use.

Cool build, don’t think I’ve seen anyone use that mask before