A few years ago, I randomly built a robot superhero MOC. I was a little sick of Bionicle at that point (I didn’t receive many plot details in 2008 very well), so I made him a n original character that gave me a fresh start. This was Omega Commander, and his creation led to a pretty fun summer of creative imagination.

Omega came to be a top favorite among my MOC collection. However, his design has been long overdue for some improvement. So, just recently, I revamped his design for a more improved design. 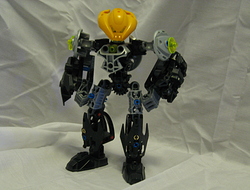 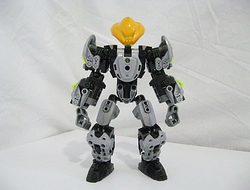 Omega has a lot of history behind him. If you care to see it, here \Omega Commander’s History]. To save time, here’s the super-short summary:

Omega Commander was built to be the protector of a galaxy full of unrest and conflict. When treachery unleashed its might upon the galaxy, Omega turned the tide of a terrible fate for the free people he swore to protect. With the greatest threat defeated, Omega decided that the galaxy needed to rebuild on its own and didn’t need his help anymore. So he set out with his companion, Xavier, to find other civilizations in need of help. He has been roaming the stars and exploring new places, even faced some tough challenges, but has yet to find a new purpose to fulfill. 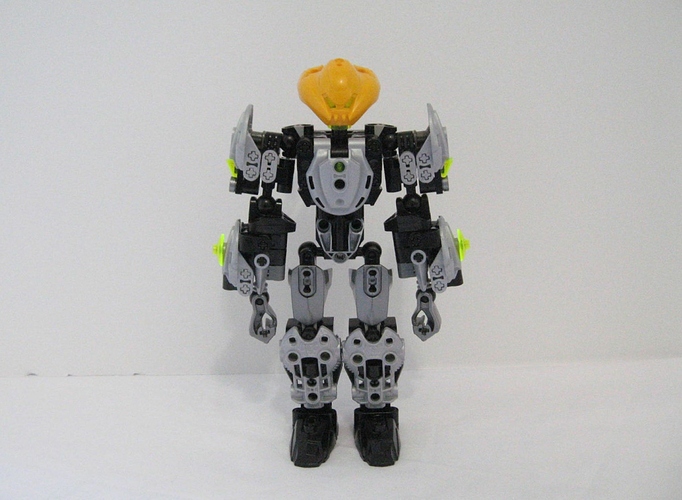 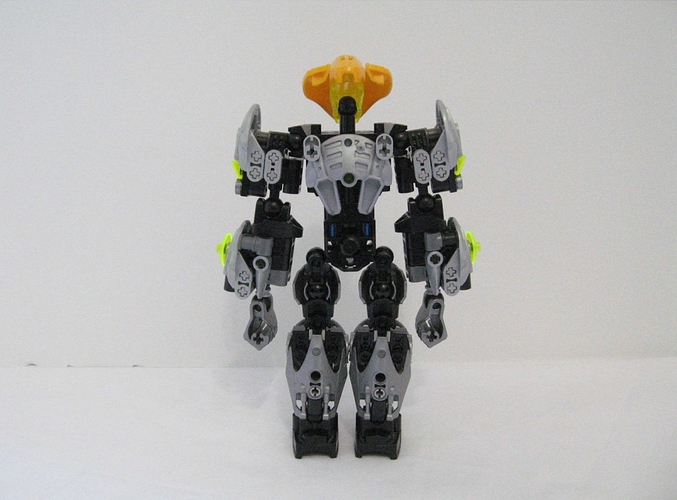 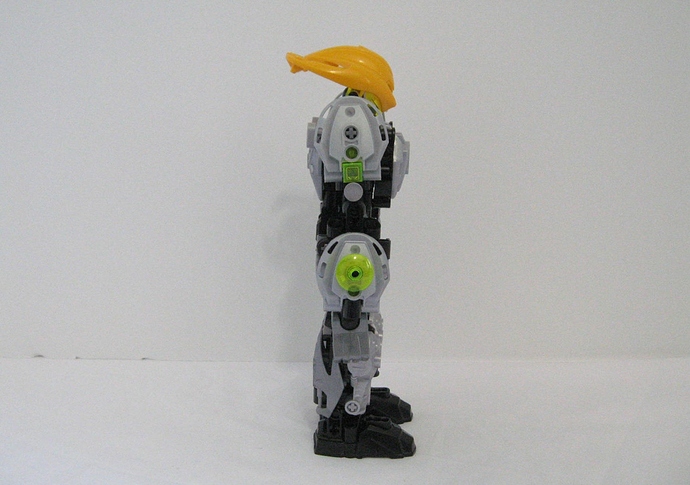 Personality: Omega was built to be the perfect soldier. He is quick and calculating, determined and courageous, and can exert authority when required. His experience has helped him develop a high regard for the well being of sentient life, which he values more than his own. While he was originally built to enforce order, his experience led him to the conclusion that life for all sentient beings was precious and that they should be free to decide their own fate. 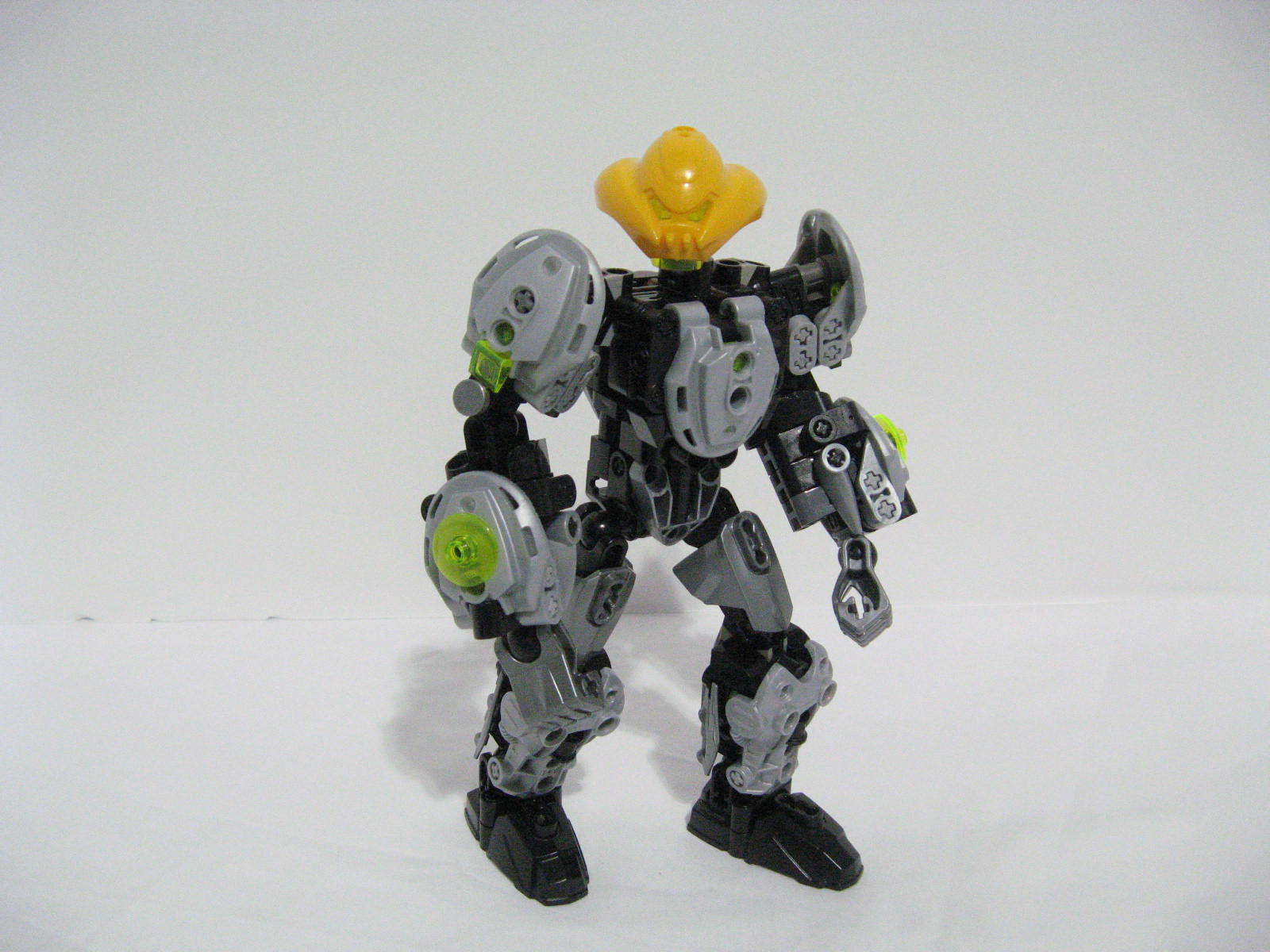 Abilities and Stats: Omega Commander is a highly-advanced robot. While his original design has been drastically improved, one feature that hasn’t changed is his AI core, the closest thing a robot could ever have to a soul. This core was designed with “fluctuant” properties in order to create a unique personality for Omega that would regulate how his experience would be utilized. In essence, Omega has free will, perhaps more than his own creators intended for him to posses. 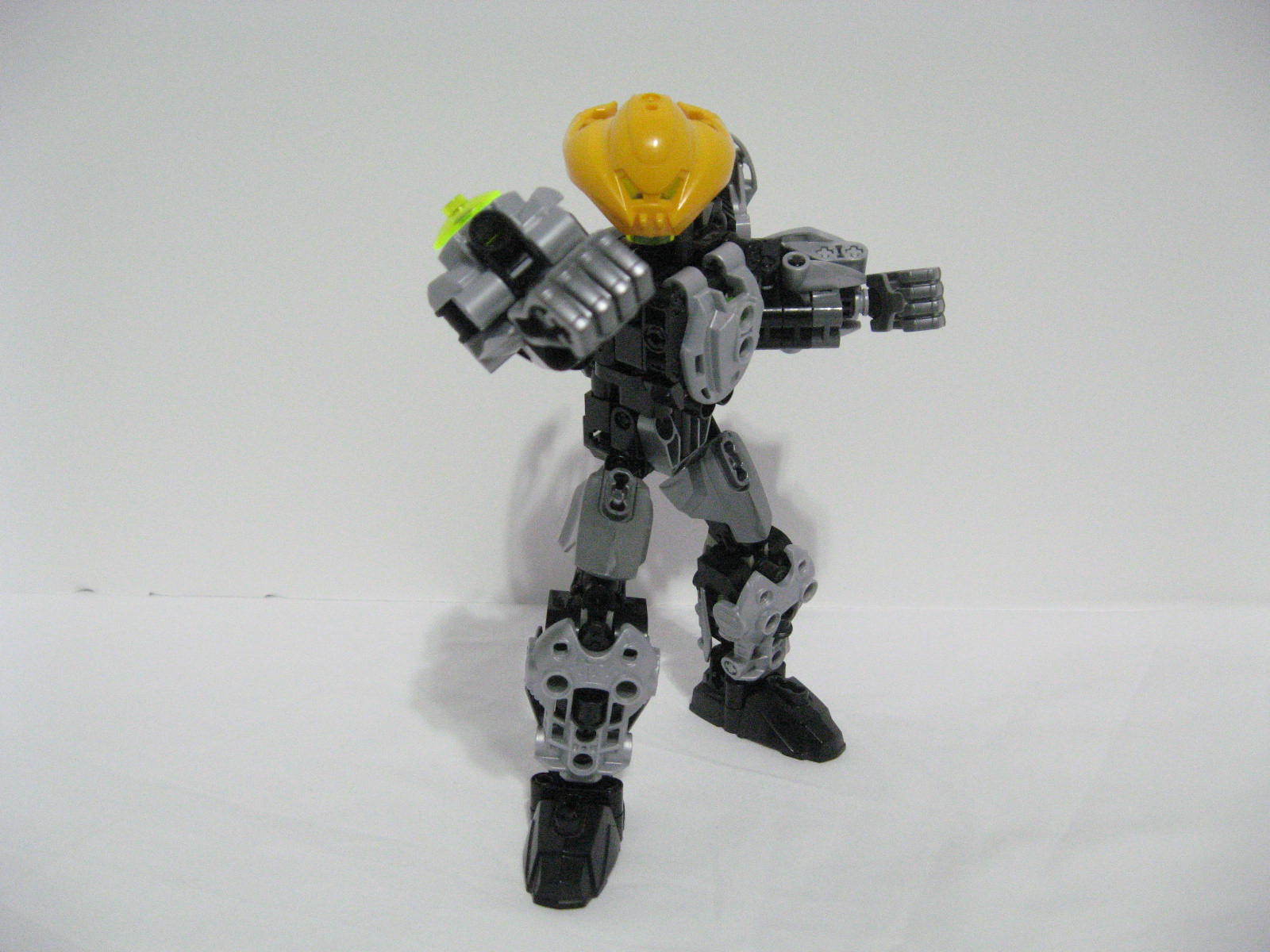 Omega is equipped with high-grade armor that is both strong against damage and light for efficient movement. Among Omega’s many upgrades is a photo-solar core, his primary power source. This core is capable of storing massive amounts of solar energy, which is converted into a form that powers all of his functions and weapons. In addition to his weapon arsenal, Omega has jet boosters in his feet for quick travel, a full body force-field, smaller energy shields that project from his arms for focused blocking of damage, and radar capabilities. 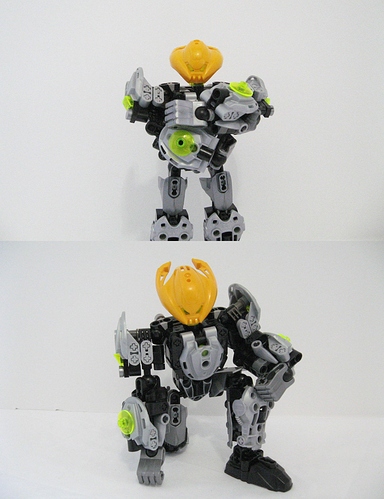 His energy can be regulated to divert power to specific functions, increasing his physical abilities and equipment stats when needed. While Omega is perfectly capable of regulation these functions himself, he has come to rely upon the help of the AI, Xavier, who’s intelligence and knowledge is far superior to Omega’s. Having addition support makes Omega 10 times more efficient on the battlefield. 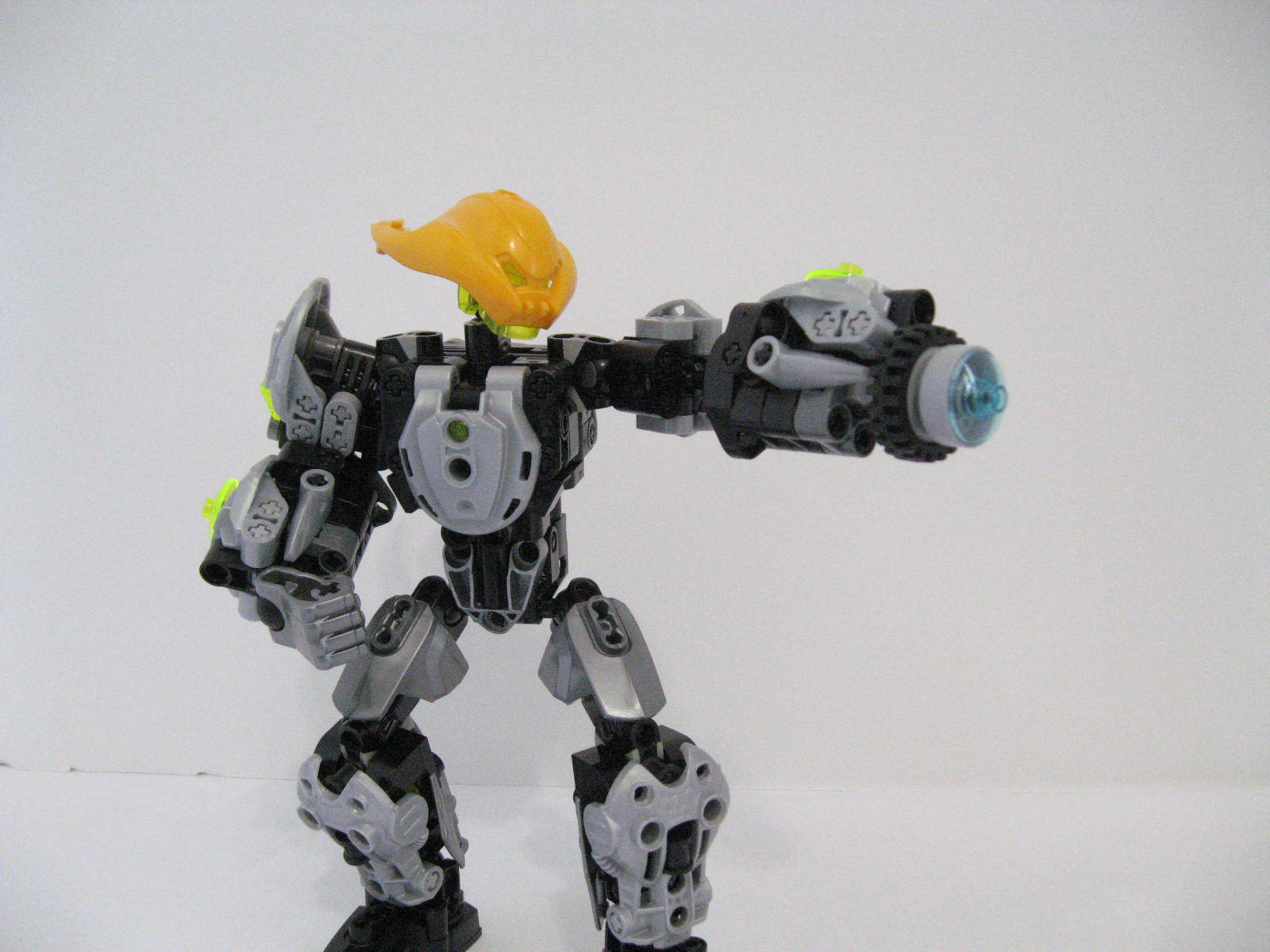 Weapons: As the peace-keeper of his galaxy, Omega was naturally equipped with weapons. As experimentation yielded successful results, his primary weapons became build into his arms for easy storage and fast-switching capabilities. However, the power demand for his original weapons was purposely designed to be inefficient as a safety measure to reduce Omega’s threat potential. Before Omega left the galaxy, Xavier improved upon his entire design, increasing the capacity and efficiency of his power supply and rebuilding his body to use said power to the fullest. His weapons were updated as well to be more efficient in combat for longer periods of time while still delivering powerful attacks. 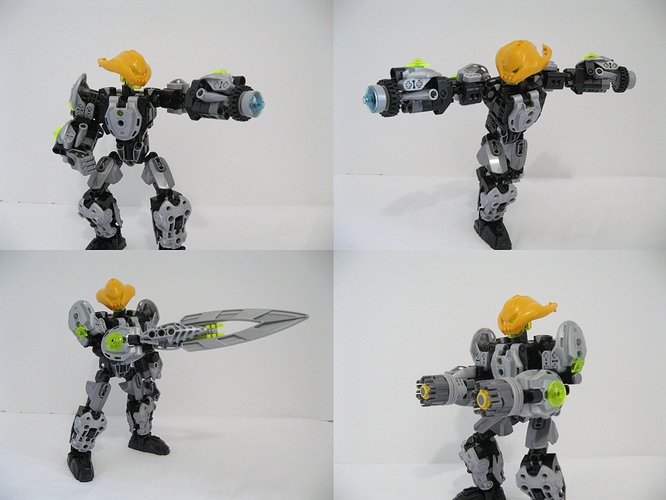 Hand Blasters: A simple pair of blasters designed to deliver quick shots, from small and accurate to power-punching. These guns are Omega’s primary weapons (besides his fists), and so they are designed to be the most energy-conserving. Either one or both guns can serve Omega for hours without severely depleting his power supply.

Omega Blade: A surviving trademark weapon for Omega, albeit heavily refined. This collapsible blade is composed of a high-grade alloy that is strong and light, just right for endurance and swiftness in combat. If a stronger “edge” is needed, Omega can generate an energy field around the blade for extra damage. This energetic field provides enough power to slice through rock and metal, all while keeping the the blade itself virtually undamaged.

HEV-Gats: High Energy-and-Velocity Gatling guns; these heavy weapons were Xavier’s solution to a compromise between Omega’s previous machine guns and missile launchers. These heavy, rotary guns fire concentrated energy blasts in rapid succession, penetrating the strongest armor and obliterating tough targets. Since these weapons have a higher requirement for power, Omega keeps them in reserve for when he can’t get his fist or sword up close and when his blasters can’t do the job.

The weapon-switching is a concept from the old design that I wanted to improve upon. I do believe that I have perfected the concept to my liking. These shots may give you and idea of how the weapon switching works with this MOC (it is a tiny bit of a pain, but it’s much faster than the old design). 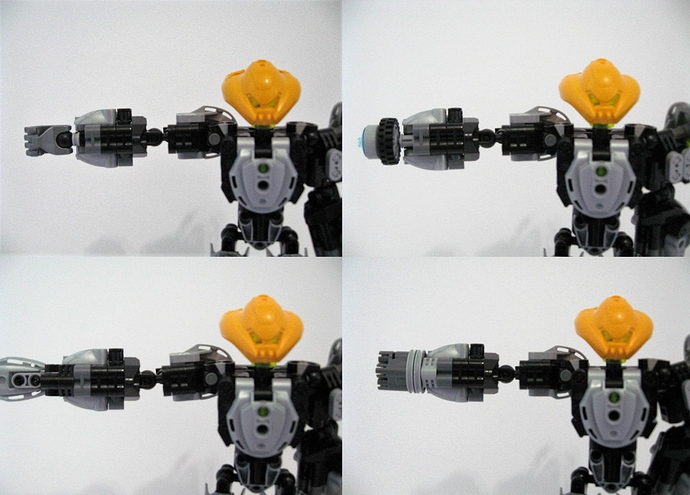 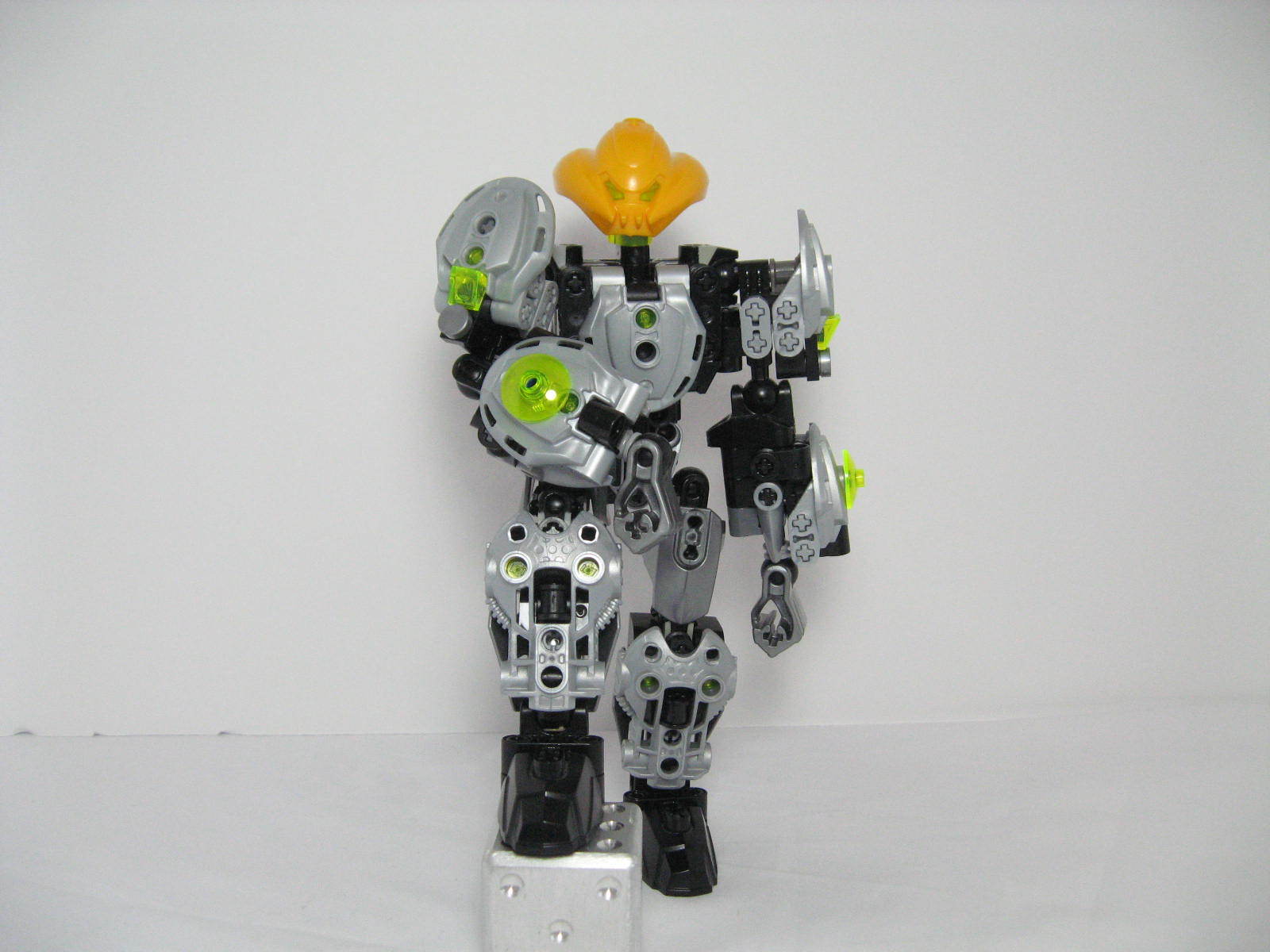 (If you’ve made it this far, then I hope you haven’t already commented on the head. I know it might seem like a lame choice, but it’s what I started with and it still works for me. Someday, I may try for an original design, but revamping Omega’s body was tough enough and I have other MOC projects to work on. Please be nice about that and thank you.)

Alright, I made it to the end, and I can understand not wanting to change the head, and in my opinion the design itself is fine, but you could at least paint the mask. Other than that I like it.

Nice back coverage. Love the guns

He has a pretty interesting design. Nice job

This is a really nicely built MOC with lots of backstory. I really like usage of parts here. Good job.

The weapons are probably the coolest thing about this. Not to mention the amazing build and color scheme.