Onua got an upgrade! 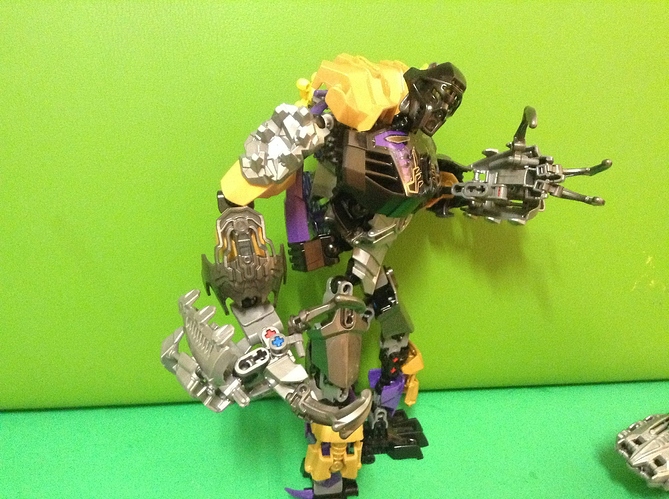 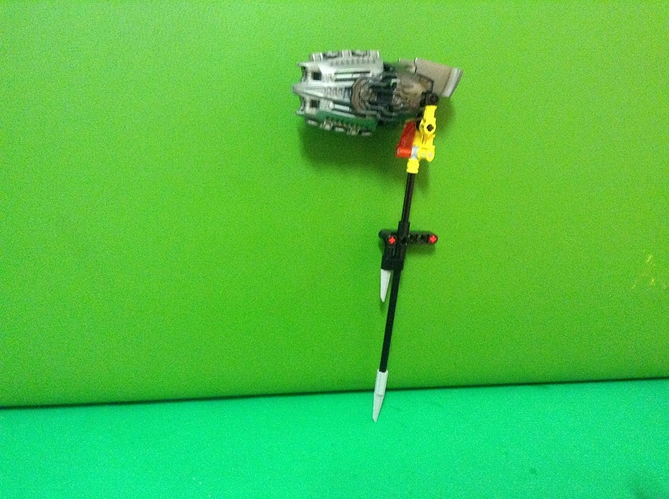 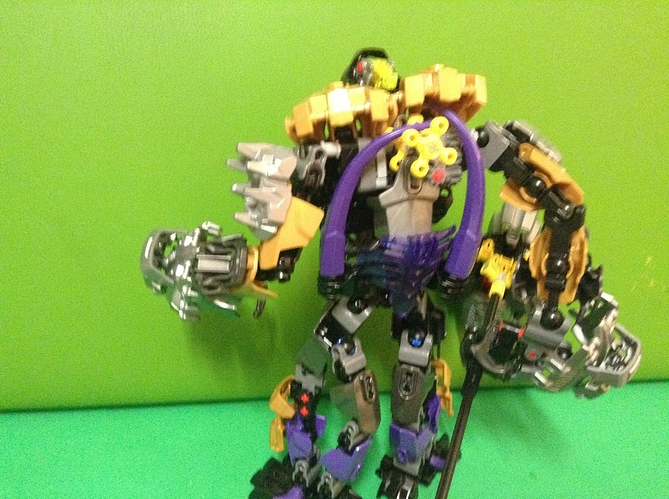 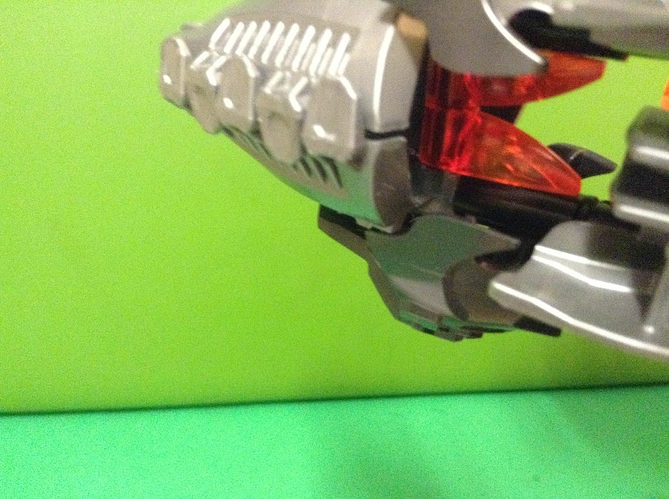 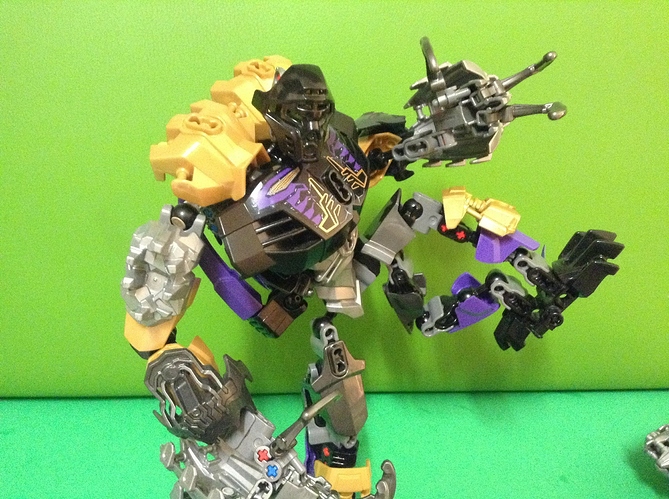 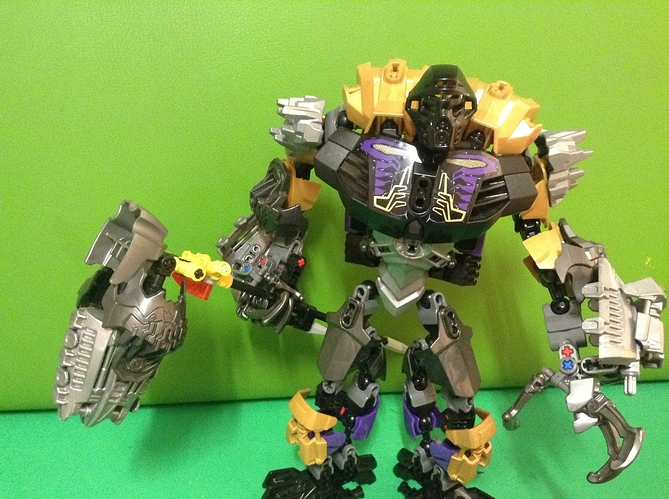 I dont know what to think of this it looks cluttered everywhere, and the yellow Technic parts used for the hammer are an eyesore. (Props for Trying)

Considering Onua was probably my favorite 2015 set, and this “upgrade” causes many MANY problems and doesn’t improve anything. Onua’s claws were always weapons not his hands, plus the Storm beast claws don’t look like they’re for shoveling. Using a hand and placing the shovels onto them will end up looking way better and make more sense.

The hammer isn’t good either, the yellow doesn’t help the extensions to it look awkward and there is no reason for the skull villain armor, theres also trans neon orange for no reason.

The armoring is good either, skull villain armor on the arms and the gunmetal armor on the upper legs isn’t needed. He now has 3 metallic colors, gold, silver, and gunmetal.
Those gold bits on the shoulders don’t look either as they look awkward from the front, the original shoulder armor made him look great and covered him well, now the arms can’t articulate forward cause of how large the chest is. You also got rid of the double arm swinging even though he has massive claws.

The arms are entirely gold with armor add ons on them breaking the color scheme.

The back looks really bad too. the Ribcage armor looks out of place and doesn’t sit flush, and those purple tails are there for seemingly no reason.

And the legs are really really bad. the front of them look really hollow and you could honestly just use a CCBS bone and have the same effect, and those back supports don’t look good, they don’t look like pistons or anything they just look like a second set of legs fused at the foot and thigh.

Sorry if this is a bit harsh but Onua 2015 is one of my favorite sets and this breaks everything he did.

I’ve seen worse, but this is one of the more cluttered MOC’s I’ve seen in awhile. TBH, I don’t know what’s exactly good about the MOC.

Then again all my points go with @AwesomeJoel27 here.

And just so you know…

THIS IS GOING TO STIR UP QUITE THE CONTROVERSY…

ooOoo
It’s a good moc but it’s quite weird looking but still good!

I dig the big claw hands. True, their placement makes the arms look gorilla-length long, and that does look a little strange, but I really do like how you utilized the open socket on the foot-hand, and made certain he had three claws, just like the Onua of old we love so.

The legs do look a bit cluttered. Good standing still, nice and bulky, but in motion, they’re gappy, and they, for me, do not work for Onua.

The same goes with the random purple Ben 10/‘Joker’ ultrabuild tail things.
They don’t fit anywhere else on Onua, or accentuate his shape or form really much at all.

I also feel like he’s severely lacking in black. I think if the feet hands and the armor on the upper arms were changed, it might look better to me color-wise.

I do like that hammer despite the yellow. It looks sturdy, and uses that add-on part in a neat way, so props to you.

Needs a little tweaking IMO but for what it is, it’s largely a decent representation of Onua.

Although I do agree with some of what has been said I think you can make a good Moc from this.

I assume you are working with limited pieces which would explain the colour scheme. Try taking away all of a certain colour to reduce the amount going on.

Another good way to improve a Moc is to take several photos so you can see how it was built. Take the entire thing apart and try and construct it a different way. Doing this allows you to try different ways and see what works best. Some of my best works were done by accident when I was just messing around with parts.

Ok, so I was reading the comments and I realised the awkward colours where a problem, so instead of making it a “2015 pieces only moc” I’ll add silver bohrok eyes, black instead of yellow on hammer, more black. The claws are staying because it’s suppose to be like 2001 onua. Thanks for reading and commenting.

I also forgot to mention that this wasn’t going to be an onua moc, just a Titan sized character, I relised it looked like onua, slapped on onuas mask and thought it looked good.

I actually agree with what everything @AwesomeJoel27, tbh. He kind of took the words out of my mouth lol.

so much better than the original set

Pretty cluttered. Not a big fan of the legs either. The claw hands is a cool idea and nice throwback to the original, but it still contributes to a cluttered look. It’s got potential, though.

Too cluttered, I’m not a huge fan.

Technically this would be Alpha Onua, as the Alpha\Omega names for the Toa were determined by the chest piece they use
Overall I think this is Interesting, but a bit cluttered

Give him a shotgun that shoots nukes. Flaming nukes