The second moc in my mirror universe series, Onua the Uniter of Earth. 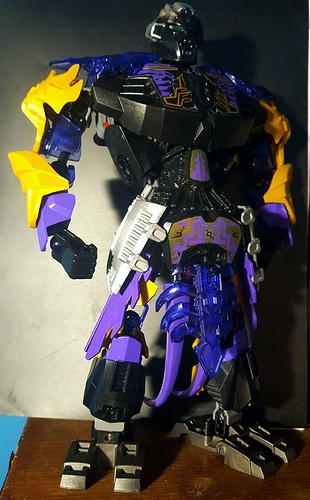 Onua was a fun one to try and do justice. He reintroduces the solid dark purple that his Master form used, and sports a torso build heavily based off of @LoganMcOwen revamp. At the start of his build, I didn’t have much of a vision in mind, but as I started working on him I began taking small cues from Journey to One’s Makuta and Ixphia’s Akamai. I thought it was fitting given that Makuta gave him this revamp instead of Ekimu.

The design is closer to final than my Pohatu was, but I still have a few more adjustments to make as well as giving him a custom weapon. I’ve got to Bricklink someparts to (his shoulders and arms are taken from my Uniter Onua).

Robes are becoming the new norm

Looks great; makes him look more noble and astute as opposed to a generic stronk brute

Not a fan of the upper arms - never been a fan of how those two pieces look together when used backwards like that - but the rest is pretty solid! Biggest issue I can find is the distribution of silver. Otherwise it’s just a solid CCBS MOC that looks a good bit like a mirror Onua.

The robes definitely add a more spiritual look to him, which is kinda how I saw the Toa. The general bulky appearance really adds to this and the overall design just works.

That gold look like keet orange in this light.