My special take on the overwatch character Widowmaker. Venom mine, rifle, grappling hook, and a few body modifications. 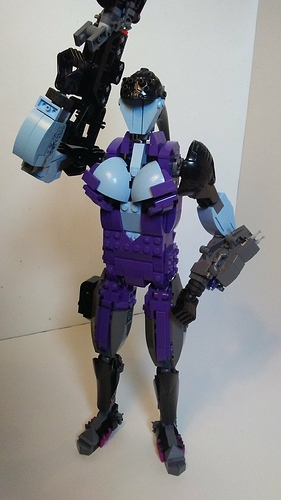 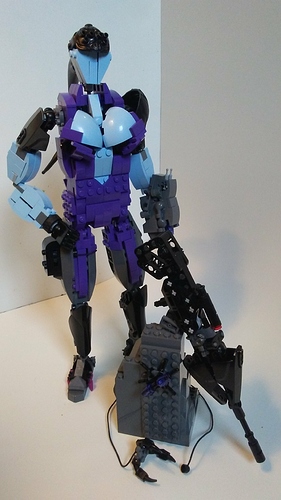 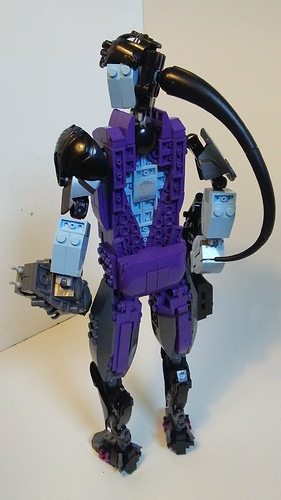 She looks a bit too thick to me.

Her torso is a block. Definitely try to fix that. Might have to redo the torso completely though.

I’m not too familiar with Overwatch or its lore, but after looking at an image of Widowmaker, the MOC looks less than accurate.

Let’s start off with the head. It seems accurate enough, though the lack of a mouth or eyes gives the model a sort of non-humanoid appearance. I will give you brownie points for using the Core Hunter helmet, though. Then there’s the torso. Though it accurately represents the details of the character, I’m not enjoying how wide it is. My advice would be to lengthen her mid section, head, and legs and keep the upper half. The model’s arms are okayish. I’m not a fan of how long they are (which could possible be fixed if you extend the torso), how the forearm is in dark stone gray instead of the black that is used throughout Widowmaker, and how small the hands seems to be, though a set of custom, larger hands might fix the issue. The legs are honestly the best part of the MOC. My only advice is to make them longer and replace the dark stone gray on the thighs with black.

In short, try to extend the length of the MOC and replace the gray for black.

The entire MOC looks too boxy and blocky to really resemble the character to me.

The torso is a bit chunkier than how I’ve seen the character portrayed, but the ideas you’ve presented seem good. The limbs and head are nice, but I’m afraid the torso drags it down.