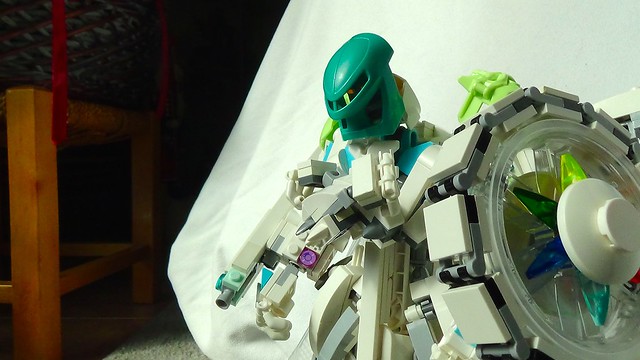 UHHHHHHHHH Yeah. This isn't even my final form. It's ridiculous, over the top, and OP as all heck. But it's the way I like it. If you're gonna go all out then go all out. Go TTGL on your creations. Why hold back? It's called fiction for a reason.

Tell me what you think. I don't Moc often, so excuse the suckyness of it. Oh and I'm pretty low on parts. Don't you dare tell me to go to bricklink. I have in the past and it's a great service, but I'm not spending 20 dollars or more on this when I could buy like the Tarakava or something instead.

"Yeaaaaaaaaaaaauhhhhhh
My over the top stupid OP mary sue of a self moc. I finally upgraded him from his old version, found on MocPages that kinda needed a lot of improvement.

I went too far.

I guess the only real background story you need to know is that there is only one villain left to fight, Balatron, and he so far cannot be defeated (he's so powerful, a single punch would send you out of the galaxy, only if you somehow managed to survive the initial hit). Thus mass arms races on the good side are trying to find a way to finally kill the evil threat. My character, as ridiculous as he looks, is actually weak and incompetent in comparison to other heroes."

rather good. Maybe tone some of the stuff down. Unless you're the type of guy to make things OP, by which then I might need to do something about it...

Can we get a photo of all four hands in motion?

Woah. This has some great use of those mini-ball joints those mixels have.
Not a big fan of the sword that goes with the shield, but the moc looks great regardless.

Does he have a arm on his chest?

The two arms folded are just meant to be decoration and they don't move.

@JMP Hahaha yeah, like I said, if I can go all out, why not go all out!

I realised that. But after a while things became boring. You couldn't expand your imagination afterwards and things got repetitive. That is why I don't have that much Over powered things in my stories anymore

Maybe done down the System a bit?

the system is intense

That Shield!!! A very good MOC. I especially love the integration of mainstream LEGO system pieces!

this isn't a bionicle MOC

I don't think I ever called it a Bionicle moc. I just have it under "Lego Creations".

This is true, I just find that Self-MOC usually implies Bio-MOC, which would be a BIONICLE MOC.

I can't tell you to make it BIONICLE. I cannot.

I'm simply stating that I find it is too System heavy.