Welcome to the Po-Wahi region. A world of art, culture, craftsmanship, fine cuisine, mining, and so many more, its people the Po-Matoran pride themselves as the most artistic of Mata Nui’s blessed. To them, creation and creativity mean everything. 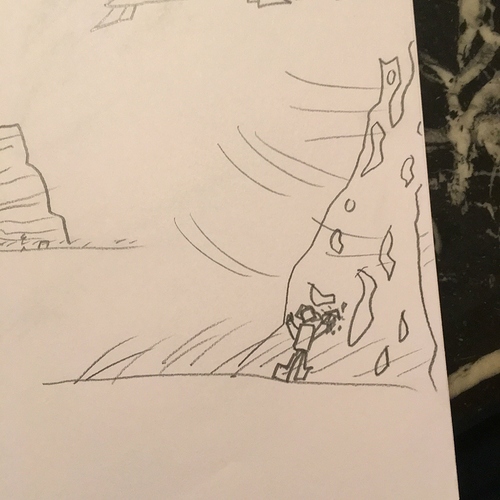 Entering the grassy, arid plains of Po-Wahi, one might stumble across strange formations of white stone, towering high above them and chiseled with a complex system of tubes and holes. Here, in this windy part of Po-Wahi, the wind constantly blows through these massive constructs, generating a sort of noise, like a massive stone flute. In areas with abundant wind, ambitious Po-Matoran musicians and instrument crafters find a large stone, or else import one, and hollow it out to create a giant wind instrument. The chorus of music whistling through the air is said to be a triumphant tune of Po-Wahi’s music.

Along the way to the Po-Matoran villages are another sight- The Ivory fields. 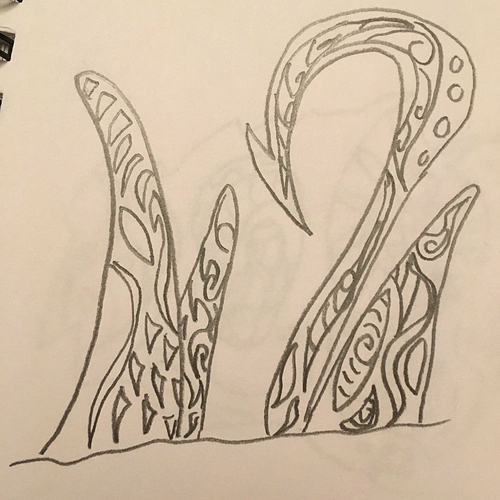 Daring artists seeking to show off their craft under the watchful eye of Ikir the Sun Spirit will bring forth large mounds of ivory and carve from them mounds of abstract, unique designs. Particularly bold carvers will even choose to shape their ivory into more wild and unheard of shapes, such as a fishing hook.

As a result of the harsh sun blazing overhead, Po-Matoran make their settlements within small canyons, where the shade provides relief. Miners are likewise attracted by the minerals and ore within the sides of the canyon walls and take advantage, storing the riches of their exploits within hollowed-out stalagmites for later use. 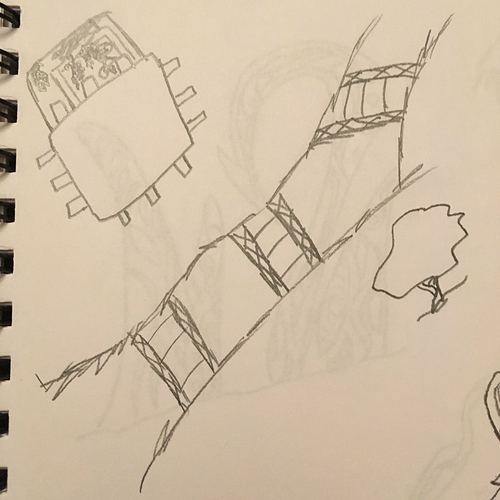 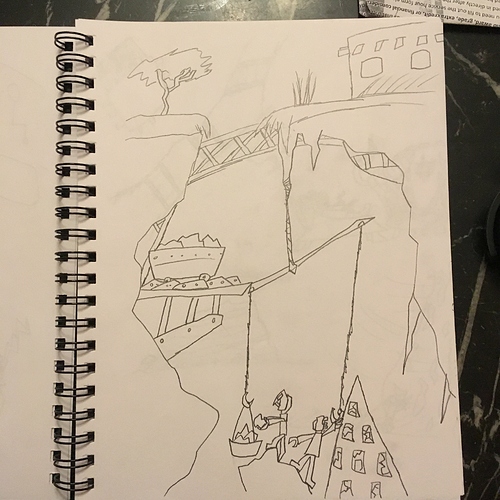 For more convenient comfort, Po-Matoran usually place special homes, often made of adobe, above these chasms. As noted in a picture above, Po-Matoran chefs pride themselves as masters of cuisine. Their gardens include exotic spices and fresh produce grown in Le-Wahi, with rich, fertile soil imported from both Ta-Wahi and Onu-Wahi. Needless to say, the Po-Matoran taste for art, culture, and wealth has made Le-Matoran commerce a very rich and satisfying business, and here, one Po-Matoran relaxes in comfort with an afternoon lunch. 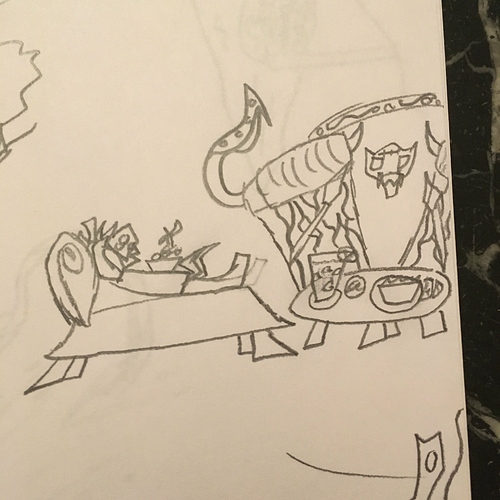 In the background above his wall is an artistic piece of furniture, an adornment to give taste and flavor to his home. Po-Matoran meals are typically eaten, lying on a couch-like bed around a table full of rich cuisine.

Below, of course, are the canyons and chasms where Po-Matoran dwell. While some will set up platforms extending out from the sides of the canyon walls, others more daring will take advantage of the massive stalactites hanging over head to hollow them out into a home. As seen below, a Shaman has carved a place within a stalactite, adorning the entrance with glass and amber beads hanging from string. 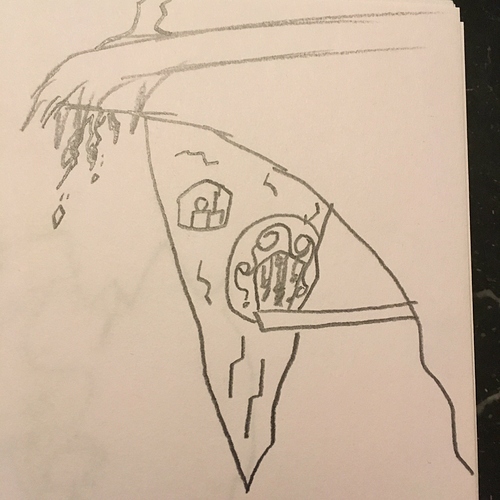 Within the recesses of the chasms, various economies go to work. Special dining clubs and bars are set up, carved within the walls of the canyon to utilize the shade. In places as these, a cold, refreshing drink of fruits and other produce can be whipped up by a skilled chef armed with blades.

Artist guilds are likewise tunneled into the walls of the canyons. Multiple guilds exist, with multiple crafters in each one. There is no ill will between them, save for the occasional rivalry, but otherwise no one hates the others. Art is art, after all.

As part of graduation from an Artists’ Guild, the student must prove their worth by carving a piece of their own art into several stone canvases carved into the walls of the chasm villages. 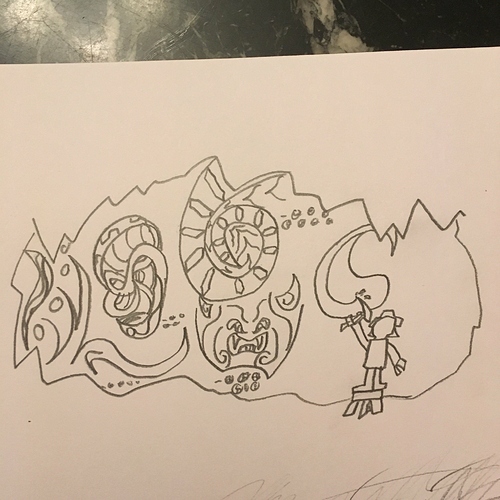 Once the graduate is finished, it is mandatory custom to sign off their work with their signature. All artists are encouraged to take pride and own up to their own creations, regardless of the quality. Particularly daring graduates will even pay to have a whole new canvas carved out for them in order to display an even larger piece of work and abstract design.

The main village of Po-Koro is a winding, twisting labyrinth of intersecting canyons and chasms. Tunnels are built to connect these chasms, bridges constructed, and holes and windows carved in to look out of. To the north of Po-Koro lies the Quicksand Falls, a constantly streaming river of quicksand that piles up at the edge of a cliff and spills over, pooling into a lake of murky danger. Needless to say, this place is highly avoided.

As artisans and crafters, the Po-Matoran are quick to thank the Great Spirit for his blessings. In times of need, some will congregate around a massive stone in the fields. 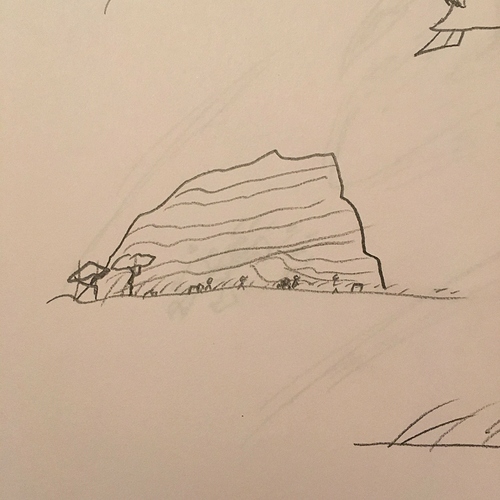 Legend has it that Mata Nui threw this great stone, and when it landed, out from the cracks in the bottom spilled out all of Po-Wahi. This sacred, natural shrine is visited by many who pray to Mata Nui for guidance, inspiration, and/or success in a new project. Visitors will supply gifts and tribute around the stone, with some piling their gifts together to attract Mata Nui’s attention with one large stack. Bolder ones will place their gifts away from the rest, standing out from the others to catch Mata Nui’s eye.

With rich minerals and crafting materials coming from the canyon mines, all else is imported from the other regions, often by the Le-Wahi Postal Services, flown by Gukko and Le-Matoran riders. In return for the tools and materials they require, Po-Matoran are happy to pay back with exquisite furniture, lavish artwork, and so forth. Po-Matoran pride themselves on their own culture so much that they even have a regional variant of the island-wide sport of Kolhii.

This version of Kolhii has no staff, and the ball is kicked around, with two goals on either side. The current reigning champions are Hewkii, a Kolhii professional, and Hafu, who acts as a master carver in his spare time, creating sculptures to display in the Statue Fields to the west.

Although Po-Wahi is a generally welcoming place, beware of the wilder canyons and chasms up north, where vicious Rahi such as the Kane-Ra or the Muaka dwell. Run if you see a wild Panrahk, which will hurl bolts of explosive energy.

As one goes farther up north, avoiding swarms of aggressive Kofo-Jaga, they will eventually reach the Storm of Sands. Here, there is nothing but sand- in the ground, and the air. Continue farther, and eventually one will be trapped in a massive sandstorm that has consumed a corner of the island for itself.

Travelers who have been trapped within have reported dark and eerie sights and stories. Tales of fellow travelers who are likewise lost, wandering the blinding, harsh winds for days, weeks… sometimes even months, and according to one tale, a whole year. Few who enter the sandstorms return.

Others claim even scarier sightings… the ruins of ancient temples, strange sculptures that seem to hint at an unknown mystery. Frighteningly enough, some have reported seeing, in the distance of the sandstorm, massive and alien silhouettes. Some recall seeing groups of hooded beings, muttering psychotic prayers. One eyewitness was even bold enough to claim to have seen a Panrahk, twenty-feet tall, staring at them from the cover of the sandy winds. 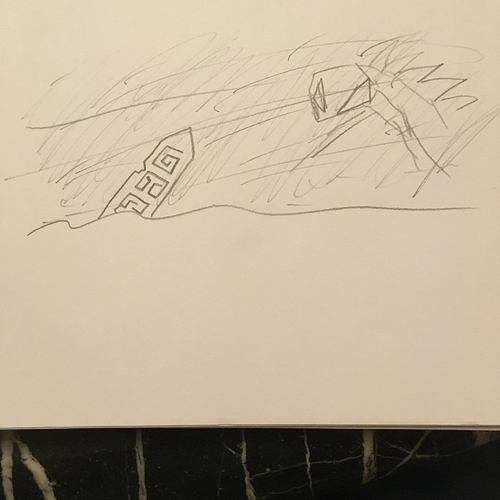 The mystery and terror of this sandstorm area has generated a popular tale that within the stormy place is the temple where Ketar, the Stone Deity who overlooks Po-Wahi, resides. Ketar is an idle and generally apathetic being, often slithering through the harsh sands, unaffected by the sandstorm, shaking her rattle to warn off those who might disturb her otherwise placated demeanor. She rests plenty and goes for many strolls, but should one incur her wrath, they will find the rage and brutality of the desert bearing upon within a single blow.

In this sandstorm area, beware creatures who hide beneath the sands, tunneling after hapless travelers who are lost. No one has seen what these things look like, but one claims to have been chased by a beast more massive than the rest. All she saw was a single, massive scorpion tale peeking out of the sand, poised at her and ready to strike. 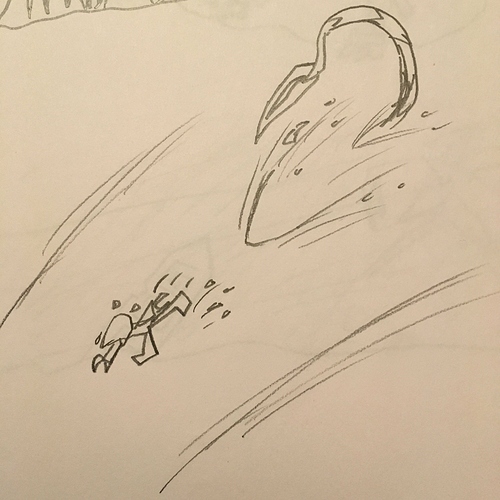 Needless to say, rumors have already begun to call this horrible beast of legend a ‘Nui-Jaga’ a great Scorpion, more massive and threatening than any nest of Kofo-Jaga could ever hope to be. Whether the Nui-Jaga truly exists has yet to be seen…

Thus, this is Po-Wahi. A land or art, of taste, of culture and pride. Artists are so valued in Po-Matoran culture that it is a joke that Po-Matoran are more accepting of an artistic villain than they are a boring saint. Whether that is truly accurate has yet to be seen, but for now, enjoy the beauty of Po-Wahi, for its glamour is the duty of all who live there.

Thanks. I really feel that going into societal lore is a VERY important part of world-building. I intend to make the civilization feel very close to home, but at the same time distinct, and I want each region to both visually and culturally stand out, and represent their elements in more interesting ways than just ‘endless desert’, or ‘super-volcanic place’. I want the very core of the element to be the basis of everything, and for the Matoran lives to revolve around them.

I’m thinking about doing some concepts for Ta-Wahi, Onu-Wahi, Le-Wahi, and perhaps Ko-Wahi (I won’t even touch Ga-Wahi, Oomatu has nailed it perfectly in every way possible and it’s pretty much canon in my interpretation of G3). Likewise, I intend to go into the Island Mythos and explore the stories of the Elemental Deities, fickle spirits of nature, likewise told by Kodan, the Chronicler.