So after listening to Podcast #249 (btw happy that the Three Brothers made it, thanks TTV!), the discussion of lightstones and potential rivalry of of Earth and Stone matoran got me thinking of some events and some world-building that could occur in Motara. I also thought that making Pohatu and Ahkmou have past conflicts would strengthen their battles as Toa and Rahkshi later on.

World-building
I imagined that one thing that could bring about dissonance between Tiro and Motara is the Earth Matoran’s dislike of technology, while Motara is the home of engineers and innovation. They have rudimentary vehicles for traversing the deserts and for transporting goods. (the Candlehead Cult could also try to sabotage shipments if we want them to act aggressively) They also have more advanced weaponry, with blasters and energized melee tools.

These technological feats are done due to lightstones. They are two types; yellow lightstones, which provide illumination for very long durations, and the more rare blue lightstone, which acts as a battery, lasting longer depending on size (crystal size of hand= a months charge) They power vehicles and tools with these special lightstones.

This setup plays into Ahkmou and his role…

Ahkmou
Ahkmou is a leader of a clan known as the Motara Jaga. They handle a large deal of lightstone mining and ■■■■■■■■ to other regions. However, they are very corrupt and often resort to mafia-esque tatics; attacking Tiroian matoran out of prejudice, extorting payments from salesmen/engineers, and making sure that major Motarian villages are under their thumb. The clan ensures that they themselves hold the majority of the blue lightstones and monopolize the market.
Ahkmou himself is a very devious individual; he will lie, manipulate, and intimidate to get what he wants. He’s extremely egotistical, often wearing Turaga-styled robes to show off his power. And while he’s often very collect and calm, the most minor of inconveniences can set off his destructive temper.
Ahkmou is also the member of the Brotherhood of Makuta, and will often use Jaga resources to supply the cult.

Nilkuu/Pohatu
Nilkuu, who has been personally attacked by the clan, and has a decent sense of morality, acts as a vigilante against the Motara Jaga. With some other matoran ( Hafu, Hewkii, etc), they form the Red Kane-Ra Clan and launch an offensive on the Motara Jaga. The fight lasts months, but the majority of Motara begins to support Nilkuu’s clan. Eventually, Nilkuu himself fights Ahkmou and wins, ending the Motara Jaga’s reign. Ahkmou is then exiled from all major villages; he flees to the secrecy of the Brotherhood, with a vendetta to get revenge on Nilkuu.

And that’s it! Throwing ideas at the wall! Let me know what ya’ll think, feedback is always welcome.

This is what happens when you read the entirety Lackadaisy, listen to Gorillaz, and don’t sleep; Prohibition-era mobs in Bionicle. Someone stop me. 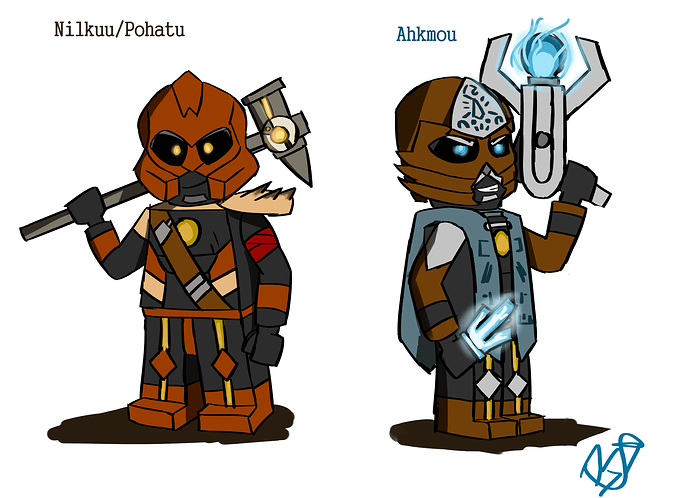 I like this idea, mostly because I love anything having to do with Motara. (STONE TRIBE FO’ SHIZZLE!)

Your idea for Ahkmou isn’t all that different from mine, (I made a post about my idea too) with one key change being the idea that Ahkmou’s group was never seen in any lawful light. They were always these bad, sand raiders.
BTW, I really like your art. It has a very colorful, innocent LEGO marketing vibe about it that I really dig.

As much as I liked my own idea for Pohatu’s backstory (as bare-bones as it was), this seems like it would fit better with what they’re doing with their story.