I recently rediscovered TTV and found out about this project via the latest podcast. I thought it was pretty interesting so I started drawing this while listening: 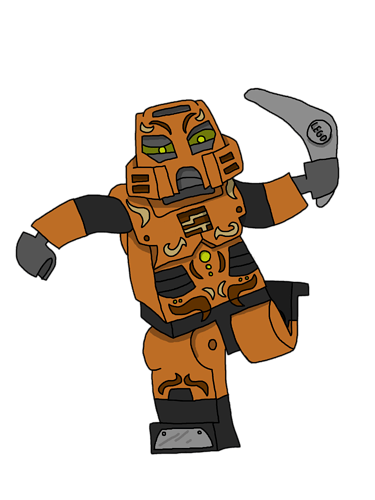 pohatu2.png2448×3264 682 KB
I went with Medium Nougat as the main colour as sort of a mid ground between Pohatu’s past orange and brown colourations. The secondary colour is supposed to be a dark chrome as a nod to Hewkii’s colouration. Having dual molding on both arms and legs on the toa might be a little excessive in terms of potential price but I did it anyway.

Admittedly boomerangs probably make more sense as air weapons but Pohatu Master had them and I liked them quite a bit (ignoring their weird rocket boot mode), though I also threw in his G1 toe guard things as additional weapons.

Credit to JediTimeLord824 for the nuva symbol window on the breastplate idea.

That is some really solid printing; good mix between mechanical and tribal aesthetics (though more mechanical elements would be better). Also that Lego logo on the boomerang is

Thanks for the shoutout! This is really good. The only thing that throws me off is the mask, which just looks a bit weird to me. But this really nice!

(though more mechanical elements would be better)

I agree, I just didn’t want to clutter it up too much.

The only thing that throws me off is the mask, which just looks a bit weird to me

Yeah, I’m not terribly fond of the mask myself but I couldn’t pinpoint exactly what I didn’t like. I think a smoother design might be better but I’ll have to experiment a bit.

I like most of the drawing but im not a fan of the face, the mouth exposed seems unnecessary and unpleasant

It’s pretty good but his eyes make him look like he’s seen something he shouldn’t have seen.

I’m not big on the facial expression, but the printing makes a nice mesh of technical and tribal aesthetics and I love the boomerang.