So, I decided to make this "comic" for @Political_Slime for some reason. Here ya go!

Slime got upset at Pot8o and activated his swag mode.

But Pot8o has a trick up his own mechanical sleeve. He gets in his mech, and, grasping @Ice's bird thingy, he becomes the Mecht8o!

Slime makes the first move, firing his flick-fire slime missiles at the Mecht8o, but the Mecht8o stretches its legs and the missiles hit the ground behind.

Slime, fresh out of ammo, runs away, but the Mecht8o follows him.

While being chased, Slime runs into @Shadezy and @KyoryuYellow1138, both of which are about to go watch the newest chapter of RWBY.

Busy with their conversation, it takes them a couple seconds before realizing that Slime just stole Shadezy's guitar hammer. They join Pot8o in chasing Slime.

Slime suddenly puts his Scroll of Shipping on Shadezy's hammer and begins writing on it.

After scribbling on the hammer, Slime throws the pen behind him, and it hits Shadezy right in the Huna.

But he misses and hits Kyoryu.

Nyran stays where he was and trips Slime just to get it over with.

Slime 360 no-scopes Pot8o with his hammer before he falls, knocking his Hau off.

As the only one left standing, Nyran proceeds to clean up the mess left behind.

So, should I make this a series?

Why do I always lose in everything?

jkjk
I love it man

also i love that I am a spycrab XD

The heck's a spycrab? 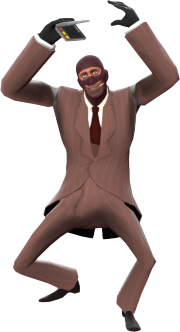 I can't make out half of it because of the backgrounds but it's still good.

After scribbling on the hammer, Slime throws the pen behind him, and it hits Shadezy right in the Huna.

I laughed so hard at that

This is pretty cool, would like to see this become a series

I laughed so hard I cried.

I am the victor.

But yeah, this was pretty enjoyable.

Nicely done, make more! I'm interested in seeing what other zany stories could dome of this crew. XD
-Oonie

This' the dumbest since Nyran was last one left

You trying to insinuate something, m8?

Before this gets locked for necroposting, I'm going to mention the Political Hammer needs to be replaced with a large stick.

Does this mean I can finally get my revenge against Slim-Jim?