Hello, everyone! Today I’m revealing my entry to the anniversary contest:

I have not only built a moc, but painted a mask, crafted a custom cape, and written a scene that will give you a sense of insight into the mind of Pridak; a Barraki that once brought Okoto to its knees. 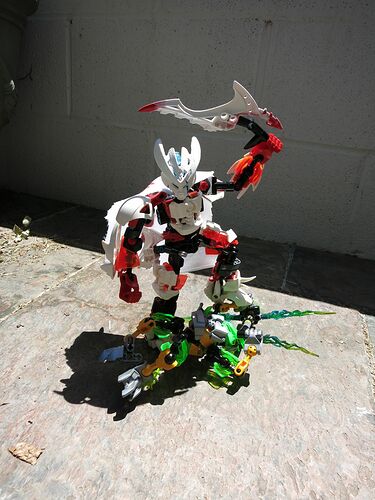 The evening sky burned a hot crimson red, a color second in brilliance only to that of the ground. Scattered upon the field outside the fortified town was a tonic of disembodied gears, pistons, and all manner of organic organs. The macabre pools of painfully eviscerated warriors varied in color, including those of red, green, and occasionally blue variants. Somewhat closer to the walled settlement was a much more active battle. Regiment upon regiment descended on the town, and the defenders were quickly losing ground. The attackers were an army similar to those who had razed Okoto in the past, yet more frightening than any ever known. The warriors on both sides were of the same race, even the same elements, yet there was an undeniable ferocity to the attackers unmatched by any. Some attackers dressed like beasts to become that which they weren’t by nature. Others didn’t feel the need to make themselves more bestial; they simply unleashed the rage they would’ve pent up were they forced into the roles of meager peasants.
To the eyes of the sole beholder, it was a beautiful sight. The colors, the fight, the savages. The village Tresshala was known all over the island of Okoto as the impenetrable fortress of high society, and it was being crushed under his heel. He was the greatest conqueror his island, his world for that matter, had ever seen. He was the true Barraki. He was Pridak.
Pridak took the moment of bliss to reflect. Doomed as they were, the defenders were putting up a fight. It puzzled him, truly. How could they be so adamant about hiding? The vision-less denizens of Okoto built walls to keep Barraki like him out, yet they knew their end was inevitable. Pent up, they spent their lives in fear and anguish; never realizing their own abilities. The weak cower from the strong, he concluded. In being cowards they degraded what little capacity they had for greatness. They suffocated themselves in armor and drowned in their own flesh. 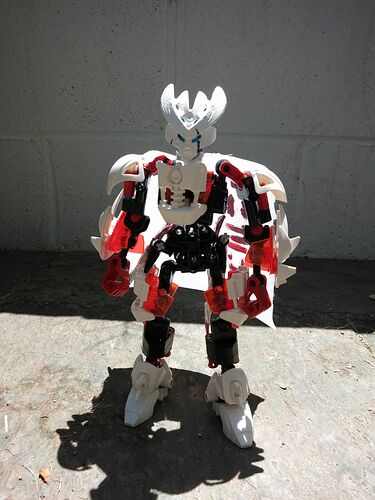 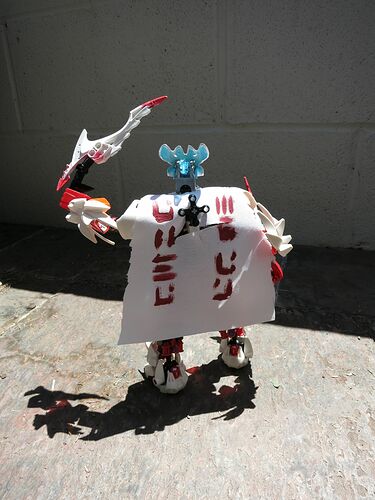 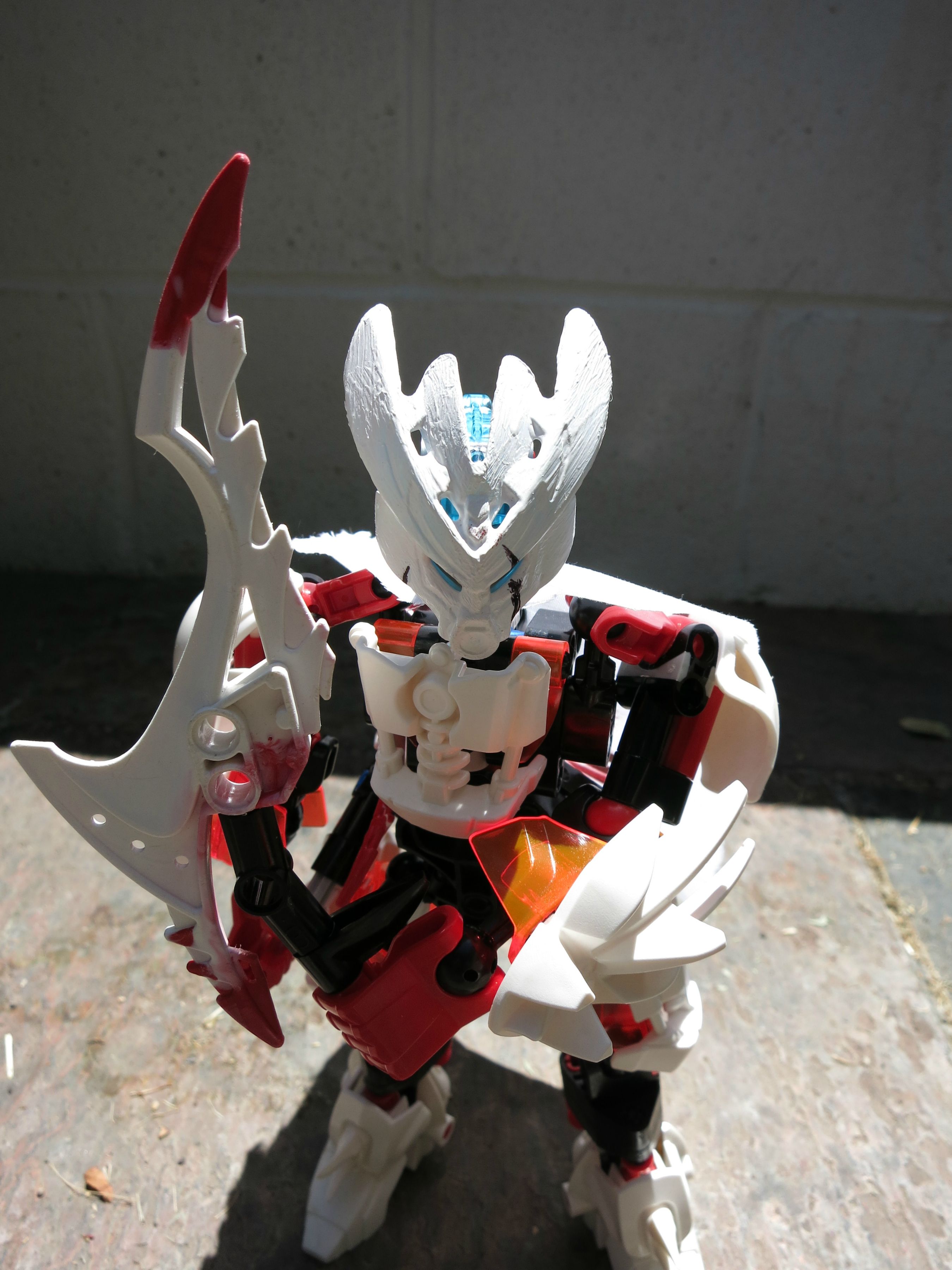 Early on in the Age of Gloom, yet following the fall of the city there was a period of clashing Barraki warlords. Villagers and Toa from all over the island rose above their peers and protectors and made their attempts at domination. None were as successful as the famed Pridak who razed his way from the central mountains surrounding the ruined city all the way to the coastal towns of the water region. His 14 year reign over more than half of the island led to little more than desolation for its inhabitants and landed his place in the deepest fears of many. His terrible reign was one of constant growth; he never stopped expanding, nor planned to until Okoto was his. Pridak’s downfall started when he made an enemy of Kulta, the Skull Grinder. The two had fought over small issues beforehand, but it came to blows when Kulta convinced the Lord of Skull Spiders to aid him rather than Pridak. LoSS had made a pact with Pridak which forbade skull spiders from infesting his lands, yet when Kulta offered to take back those territories in return for LoSS’s allegiance, The Lord took it. The two forces began eating away at Pridak’s borders, enticing other Barraki to do the same. Very quickly Pridak found himself in a predicament he had never faced. His forces were a dreaded offensive force, but the Barraki had underestimated the importance of defense. He assumed that by constantly expanding and leaving his prior enemies with nothing but ashes, he could take hold of Okoto efficiently and effectively. Yet when attacked on all sides, he couldn’t quite maneuver himself out. Eventually, Pridak and his forces were backed up against the ocean and trapped. What exactly became of Pridak is unknown, seeing as modern protectors have done their best to erase him from history, but it’s assumed he was exiled from Okoto and sent off to sea.

Pridak himself was a villager who augmented his own physical stature with a mesh of good engineering on Makuta’s part and his own access to the dark arts. Perhaps due to his upbringing, Pridak developed a philosophy of will and determination as a way to elevate oneself above others. To him, those who didn’t fight for their dominance were weak. They didn’t aim high enough and would never achieve anything. Pridak was also known for his blood lust. He favored the heat of battle over anything else. Fighting with swift and precise, yet oddly wild strikes, it was as if he went into an uncontrollable rage during combat. His berserk, frenzy like behavior earned him the nickname “The Shark” among his troops.

There’s no telling where Pridak is now nor whether he will return, but if he does, the Toa will face a fearsome enemy unlike they’ve ever seen. 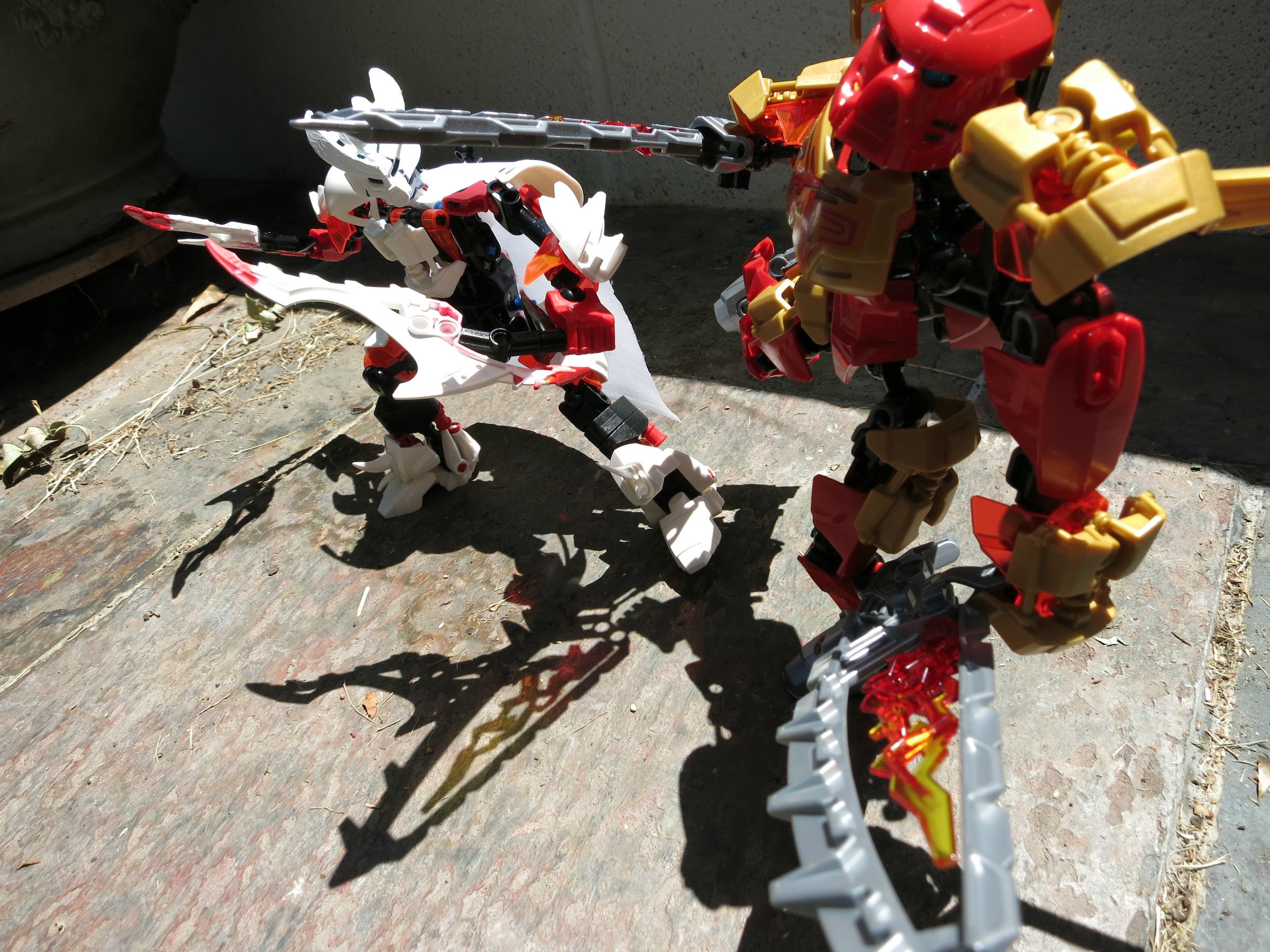 As a side note, I’m not sure exactly what category this should be entered in. It is indeed a moc, yet I’ve put a lot into his character and backstory.(particularly the opening passage)

Enter it wherever you feel it would hold up the best, I suppose.

Well, this is awesome, a great re imaging of a classic G1 villain…

I like the crack in the guy’s mask.
It’s cool now that we have a blank slate, we can do almost anything we want with old characters like the Barraki and make Mocs out of them like this!

Awesome! By the way what is this anniversary contest?

The MOC itself is not anything to write home about…

@EvilLobsterKing @Middlefingerstudios @Neowulf
Thanks guys! I had a lot of fun with the concept; perhaps we’ll see more similar mocs in the future!

The MOC itself is not anything to write home about…

The MOC looks pretty go… Wait, is that a painted mask?!

Yessir, it most certainly is.

Using a G1 villain for this was a great idea!

Looks awesome, but the mask is bland. maybe if the white faded to red at the top? Also, the brush strokes are too noticeable.

This guy is really cool! It’s all over for me

Using a G1 villain for this was a great idea!

This guy is really cool!

but the mask is bland. maybe if the white faded to red at the top? Also, the brush strokes are too noticeable.

I had thought about that when I painted it initially. I decided that if I added red, it would detract too much attention from the scars. As for the texture, there’s unfortunately not much I can do about that. My brush was old.

Maybe next time try like a, sponge brush, or something, just so there are no strokes on ME. lololol I’m Ultron.