Problem to import a custom piece to Stud.io

Recently, I started working in my mocs for the Hagah contest using Stud.io, and when it was time to choose masks, I thought Khing K’s mask of emulation would be an excellent choice. Once I downloaded the file from Thingiverse, I used the Page AnyConv to convert the .stl file to an .obj one since PartDesigner only allows .obj, .dat or .Idr files to be imported there. Everything was going well there, the only thing I had to do was to modify the part’s size (I used Lhikan’s and Norik’s masks as an example). The problem started when I tried to use it in Stud.io. For some reason, it has a totally different appearance and looks kinda like a rock instead of a Lego piece. Anyone knows how to fix this or if I did anything wrong? I already made one custom piece in PartDesigner and it works with Stud.io, but this one doesn’t.
I will leave a few photos of the piece below. 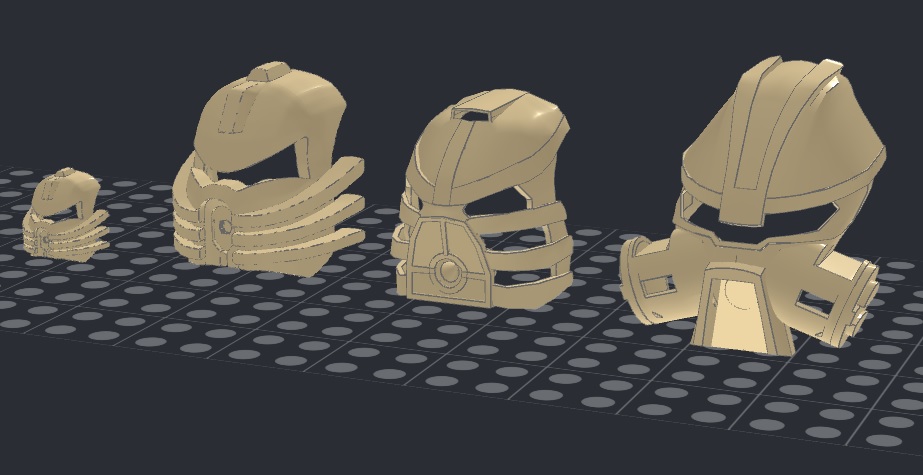 This one is in PartDesigner, the first mask is in its original size and the second is already in a Bionicle mask size.

This is what appeared in Stud.io when I tried to use it in a metru head.

This is the piece in Stud.io from different angles. It is possible to see some edges of the piece in black but still looks nothing like it should.

Did you made some modification to the mask in PartDesigner? Do you added a piece or connection?

The only thing I did was to make it bigger, apart from that, it is exactly the same piece.

Weird, I really don’t know what could be happening. The only time I had a similar problem was when I merge two pieces in PartDesigner. Maybe the convertion to .obj is bad. Try this page, it worked to me.

I tried using your page, but the piece still has that weird appearance. I’m starting to think it may have something to do with the original file from KhingK’s page.

I don’t have more ideas. Sorry for not being able to help you

It’s ok, thank you anyway for trying. Looks like it was the original file as I suspected. I repeated the same process with another mask and it worked. I’ll look for a similar mask for Pouks since KhingK’s is currently not working.

I had this same problem when I first tried out importing a model to stud.io.

I’m not sure if you use Blender but how I got my mask to look somewhat decently in shape in the stud.io program was to use the “decimate” modifier effect on it and drag one of the sliders enough until the amount of vertices lessened significantly.

I’ve no idea if this is the only way or not, it’s just what I found out from extensive research into how to fix that problem, if anyone has a better solution pleas do let us know.

The mask files are very high poly which is causing the problem. Because of this, I had to get my mask files decimated to make it more compatible with Stud.io. My bio-pack can be found here:
https://www.reddit.com/r/bioniclelego/comments/ibmb9l/studio_the_galvapack_and_khingk_pack_both_updated/

Instructions on how to download the full pack can be found in the link. Let me know if any other issues arise.