In story Jaller carried two swords while in his inika form, which makes me wonder, where did he keep his Zamor Launcher? Did Jaller just holster it(or come as close to holstering a zamor launcher could be holstered) or did Nuparu modify Jaller’s zamor launcher to be shoulder mounted like his own?

He has a mouth.

He held it in between his teeth. 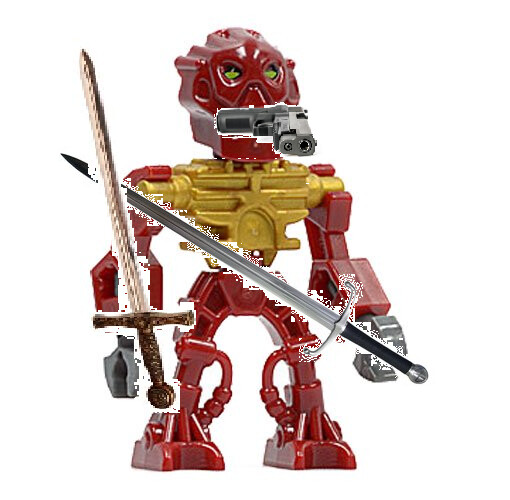 The real answer is the prototype at the time of writing the novel had two swords and no zamor so Greg wrote him as having two swords. This stayed in the books even though the set changed before production, and it was never altered.

I think Greg also said he simply forgot. Forgot what? I don’t remember. Yes the irony is strong here

Jaller had one sword on his back, probably. Maybe he had the Zamor launcher on a belt, cowboy-style. 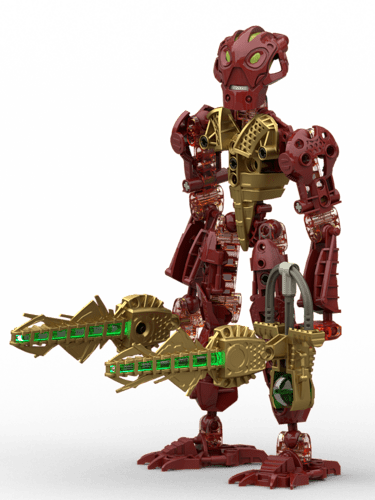 Question: “Did Jaller Inika plainly put one of his swords away after he got a Zamor” launcher?

Response: “More likely, he simply carried it with him in some way.” Official Greg Dialogue | Page 270

Question: “During 2006, you used a Jaller prototype as a basis for his in-fiction appearance. Said prototype had two Energized Flame Swords, so my question is, how did it hold both the swords and a Zamor Launcher?”

Based on the first response, I think there’s a good chance that he stored his extra sword on his back.

We’re not even sure where the second sword being from a prototype originates from. The earliest quote even says it’s a typo, while two later ones say Greg decided to give him two.

That aside, the Toa Inika only received their Zamor Launchers like, half-way through the story, so if he had two swords, that wouldn’t have been a problem up until then. After that, I assume he had it magnetically attached to his back, like Toa Tools are usually carried, and like how the Toa Metru sets store their tools on their backs. That’s how Nuparu did it in 2007.

The point in the story where he is said to have two swords is in 2007 when they’re travelling down the Cord though. At that point, the Zamor Launchers would have served their purpose - they had zamors which contained Energized Protodermis, so that they could neutralize the Antidermis used to control the Matoran - so why would they still have them? (Though, there might be references to them in the story that say they have them still…)

Regardless of all of this, surely they had some way to holster them, and did hold them in their hand all the time?

Have we considered another option 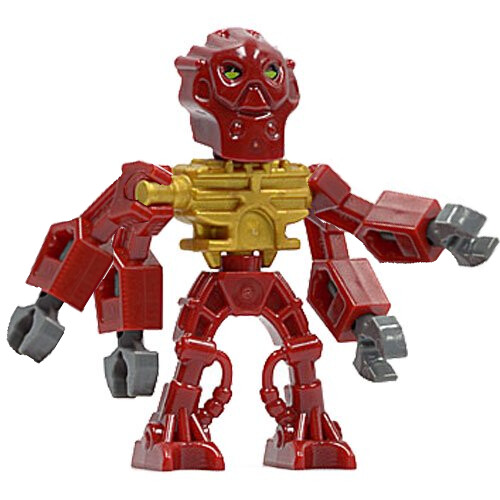 Seconding the idea of Jaller alternating between his two swords and his Zamor launcher. It would be a good backup system for when/if he lost his weapons in a fight.

I think Greg also said he simply forgot. Forgot what? I don’t remember. Yes the irony is strong here

See it’s funny because Jaller’s the one who shoots the epic special mega Zamor sphere at the bad guy.

Seems he forgot that as well.

Strapping the sword to his back seems like the most logical explanation, as much as I would like @Ghid suggestions to be correct

You are a bold one

I personally think that he could’ve just stored it on his back, similar to how some other toa stored their tools