All right, so my drawing skills for these aren’t the best, and they’re a little rushed, but just bear with me.

Now, it seems as if the idea of Kopaka being the Toa of Lightning is being set down, and while I don’t entirely agree with that, I might as well go with the flow and offer some ideas for it.

The Region of Lightning in my concept art consists of several mountain ranges in a static-filled, ozone-heavy sky and environment. Up above, rainless clouds constantly sent forth bursts of lightning and energy, and to take advantage of this the villagers have built special mountaintop villages along the highest mountains. 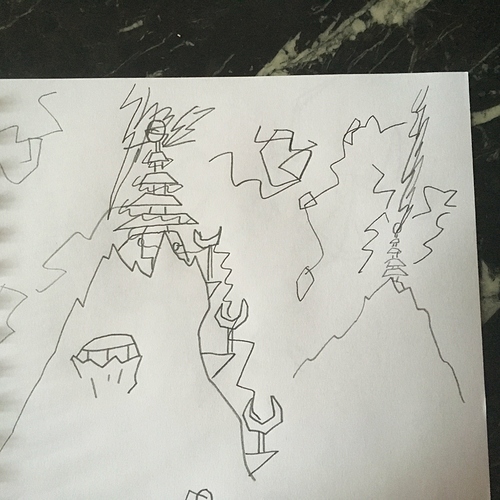 The electricity in question continues on downward through the mountain before hitting a Power Plant at the base of the mountain, where special batteries are charged. These batteries are then sent to the other villages to harvest the energy, and markets have been set up there to take advantage of the commerce there. Trolleys leading up to the higher villages have been set up at these Power Plant Markets.

The main, central village would be built atop the island’s highest peak, named Mount Ihu after the brilliant inventor who discovered how to harness the power of lightning itself and use it to improve everyone’s everyday lives. 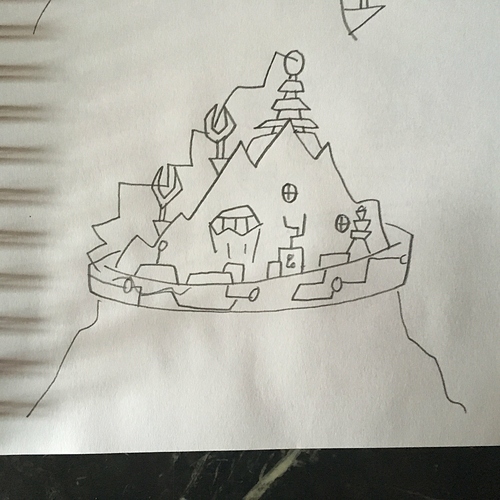 The Lightning Rods transmit some of the energy from the peak to the barriers around the village, creating an electrified wall that keeps away Rahi, wild Rahkshi, and other threats. Even when time is shut down and the matoran freeze, lightning continues to rage, powering these villages and keeping enemies and Toa alike away, like an active ghost village.

However, other parts of the region are left vulnerable to threats, and soon wild Kurahk have begun to attack the Lightning Rods that transmit energy. 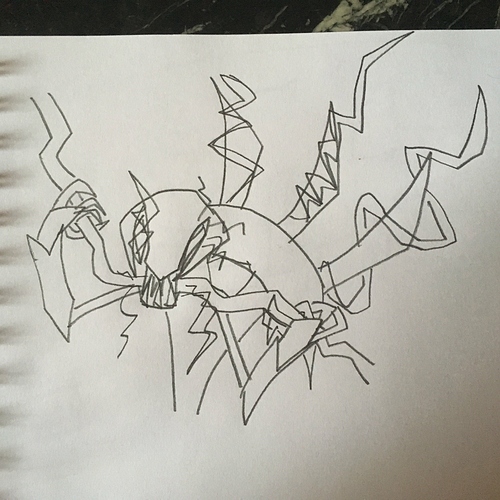 Kurahk are already hyper-active aggressive, but as a result of some feeding on the energy cables, they’ve become charged with Lightning and have become twice as dangerous. These Charged Kurahk have developed a taste for energy and are immune to Kopaka’s attacks, hungrily absorbing them and launching off their own energy bolts. Thankfully, the seemingly-living defenses of the villages keep the Kurahk from entering and attacking the frozen Ko-Matoran.

After time is unfrozen, Kopaka quickly introduces his comrades to a popular sport in Ko-Koro, even more popular than the island-wide sport of Kolhii; Electric Surfing. 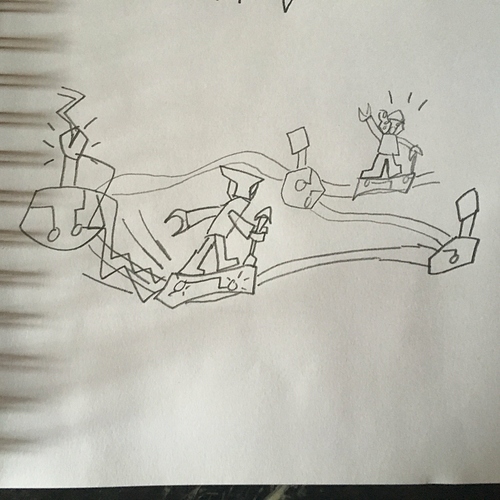 At least two riders start on special pods at the beginning of a massive grid made of railways and tracks. Along these complex tracks are special Lightning Rods that take in bursts of lightning that rain from the heavens above, charging the tracks they’ve aligned with and giving the rider on them an additional boost of speed. Special levers on the riders’ pods allow them to switch tracks, and some will even circle back to where they started to catch an incoming powerful current of lightning surging through the grid. 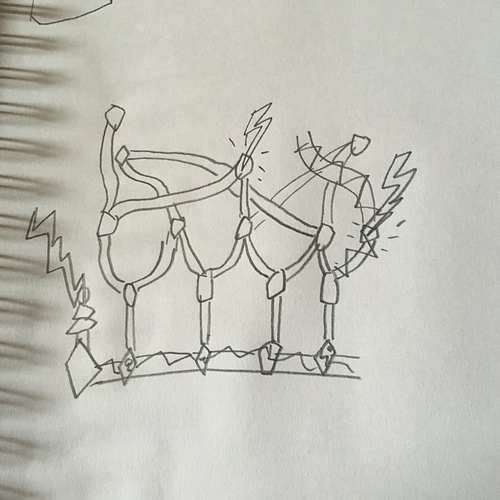 Electric-Surfing has some basis in luck, but a skilled player can beat even the luckiest one by using their currents and turns wisely to get to the finishing line.

Electricity constantly surges through a massive roof above the Koro, giving light and surging to the city below through special pillars. 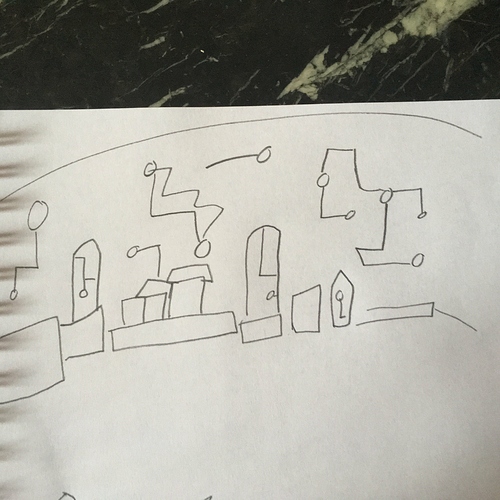 (This drawing isn’t so good)

Lightning tends to flash through the mechanical village on a rhythmic or else chaotic basis. Due to the seemingly fickle nature of Melum, the Lightning Deity said to send these bursts of energy to the mountains, the Ko-Matoran have a culture valuing luck and daring acts. Many will wish a friend good luck by stating, “May Melum smile upon you with a flash of energy!” This luck-based culture has a side of gambling to it, and gives thrill to some Ko-Matoran as they anticipate Melum’s grace.

Cables sometimes slither through these villages. The Power-Plants, some at the base of the mountains, others carved into the side, have special, almost rhythm-based security systems based on a current of electricity that runs through the building, sent down from the lightning above. Special switches can redistribute these currents, and only the most skilled Ko-Matoran Electricians can navigate this apparent puzzle of lightning to enter the workplace. Ko-Matoran, needless to say, pride themselves on this intellectually-based security system and boast it as the best on the island, with only the smartest deserving entry to the power-plants.

Legend also has of a special power-plant, more elaborate and maze-like than the rest, hidden in the core of a mountain, accessible only through a secret tunnel from the side. Some say a great treasure is within this plant… others claim it’s the island’s worst secret. Whatever it is, the Toa must brave the perilous energy and the fickle nature of Melum as they combat energy-draining Kurahk and other parasitic rahi as they traverse the rocky slopes.

They also must heed the massive rocks that float throughout the skies, stones with a special magnetic property that causes them to float through electro-magnetism when in the vicinity of so much lightning. These ‘floating islands’ are sometimes attached through special cables to the mountains, and are usually the sights of Electric Surfing grids, clubs, and other places.

I hope you guys liked the art and ideas I supplied for the Region of Lightning! Some of these drawings were a bit rushed, but I figured any visual aid is better than none at all!

Really that’s one of the biggest problems with lightning, you can’t really convey it in the tribal setting.

Not criticizing your drawing in particular but the idea behind it, I just feel like having lightning as a whole new element to be unnecessary, specially considering that the toa could have their normal elements and lightning as a secondary weapon like the toa inika had maybe

Really that’s one of the biggest problems with lightning, you can’t really convey it in the tribal setting.

I’m not gonna lie, that is part of the problem I had with Lightning to begin with, especially since it’s apparently going to replace Ice. That being said, if that’s the direction TTV is going to go, I’ll support it anyway.

Personally, I took cues from Metru Nui for Ko-Wahi. I myself like the idea of the Ko-Matoran being the most technologically advanced due to their emphasis on knowledge, and as such are seen as a bit ‘out-there’, and ‘high and above’ everyone both literally and figuratively, due to the stark contrast of their village. Needless to say, this emphasis on cold tech has made them quite snobby and quick to insult the ‘primitive tools’ of other regions.

Not criticizing your drawing in particular but the idea behind it, I just feel like having lightning as a whole new element to be unnecessary, specially considering that the toa could have their normal elements and lightning as a secondary weapon like the toa inika had maybe

Yeah, I wasn’t exactly advocating for Lightning to replace Ice, but that seems to be what TTV is aiming for. Still, I figured I might as well have fun and try to convey the idea of lightning being the bridge between nature and machine- Lightning reigns down from the skies and was seen as an act of the divine. Now, it’s cold, harsh nature is associated with machinery. Ko-Wahi is very radically different, and as such the Ko-Matoran a bit ‘superior’ in their self-view and kind of snobby about it.

Also, I thought I should say this- But thanks for the feedback, guys.

Yeah, Lightning definitely isn’t the most ‘natural’ of elements, as it’s hard to imagine it being a part of the natural tribal setting when not being used in machinery. Still, this gives me the idea… What if, as an homage to the icy peaks of Ko-Wahi, there’d be a separate, snow-covered mountain where monks lived in?

These monks would’ve populated this snowy mountain as an averse reaction to the new Ko-Matoran use of technology. Seeing it as unnatural and barring them from nature, these monks have stayed behind in what was once the original look of Ko-Wahi; Mountain villages with Mahi being herded along. While the rest of Ko-Koro moved to the cold industry of machines, these monks have stayed behind to continue the old way of Ko-Matoran life. Perhaps G3 Nuju could be a part of them, which fits in nicely with him choosing to speak in bird-speak instead.

Likewise, in-universe, the technological setting gives Kopaka a motive for his coldness towards the others- As mentioned earlier, the Ko-Matoran society likes to view itself as advanced and superior, and thus they can be a bit snobby about it. As part of Kopaka’s character arc, he learns that just because it’s not the advanced Ko-Koro tech doesn’t make it bad, and he learns too appreciate the beauty and value of nature and the other regions.

His fellow Toa, too, soon grow to see that this cold, harsh machinery isn’t inherently bad, and that on its own it has protected the frozen, vulnerable Ko-Matoran from outside threats. I feel like having such a radically-different world be Kopaka’s home can help contribute to his character arc of being above the others and a loner, and contribute to the narrative of the Toa accepting him and vice-versa.

On an additional thought, part of Makuta’s motivations, so far, is a desire to return to the ‘old times’ and bring the island to its original state. Perhaps part of his big actions was an averse reaction to Ko-Koro, and its tech and progress could be seen by him as the ultimate insult, the last straw, and proof that the world’s ‘purity’ must be preserved.

Continuing on this idea, perhaps Kopaka once lived in these icy monasteries and was a pupil of Nuju. However, upon visiting the advanced city of Ko-Koro, he became entranced by the wonders he saw and felt that this was the direction the island needed to go. As a result, upon returning to the Monastery, he had an argument with Nuju, ultimately leading to a falling-out in which Kopaka moved to Ko-Koro.

Needless to say, as he and the Toa explore Ko-Wahi, Kopaka will mournfully reminisce on his troubles with his mentor and regret what he had said that day. Mending his broken friendship with Nuju will help motivate him in his quest to save the island and unfreeze time.

if that’s the direction TTV is going to go, I’ll support it anyway.

I’ll be fighting it and plantdirt till the bitter end.
If you don’t like the idea don’t support it, how else will they know?

if that’s the direction TTV is going to go, I’ll support it anyway.

I’ll be fighting it and plantdirt till the bitter end.
If you don’t like the idea don’t support it, how else will they know?

Because while I do yearn for Ice to remain in G3, I’m also welcome to change and want to explore different ideas. Part of the appeal for Reboots, in my opinion, is the opportunity for change and incorporate new concepts. That being said, I might consider working on a Region of Ice Concept Art as well in the future- Who knows?

So, there’s been a recent update, and TTV has confirmed that the original six elements will remain, and that Lightning will also be added later on into the story as well. I’m not sure how much this will affect these ideas and concepts…