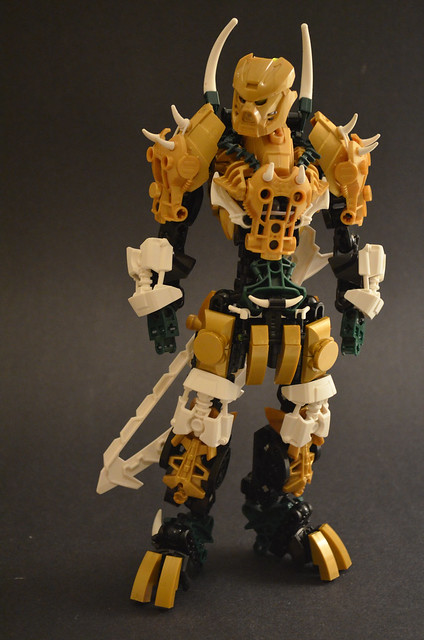 Little is known about this titan of the wilds. Rhykyn appears whenever the natural world is being overrun by industry to put a stop to the destruction, often enacting plenty of destruction himself in response. His last notable appearance was during the golden age of the Mask Makers on Okoto. Respecting the Mask Makers on a personal level, Rhykyn tolerated their advances to a certain extent, until the Ancient City expanded too far into Rhykyn's territory and he threatened to fight back. It is unknown what transpired after a confrontation with the Mask Makers ended in Rhykyn's disappearance, but there is evidence of his survival.

I just realized once more

Great MOC. The feet, despite your worries, look really neat. My biggest gripe would be the foot for the neck connection, which bulges out just a bit too much for me.

The MOC actually all started with the idea of using the foot as the neck, and once I'd done that I didn't want to change it (besides, the foot was holding the torso together).

I like. Especially the mix of gold, white, and green. I do think it could use a bit more green, but otherwise, great MOC

An interesting mask choice, I think something more sleek would flow better with the body, but anyway, great MOC!

Nice. It all flows well together.

Thank you! That was an important consideration in the WIP process.

Okay, I'll just throw out a review on Chro's creation.

The build is very nice, a well-balanced blend between detail and armor. What bugs me incomprehensibly is the color scheme. I mean, why does a jungle-themed warrior have so much gold? I mean, you bothered to slip some Metru-green on him, but it's so scarcely-placed it just looks out-of-place. The white also looks kinda odd. I mean, the teeth are tolerable, but the white armor just looks...weird. Really weird. Scrap the white and get a little more green outlines on him, and he'll be perfect by my count. Or heck, go for a completely gold scheme if you want. He just needs something consistent.

Jungle-themed? He isn't jungle-themed. The 2015 Hau reminded me vaguely of a lion head so I went with that. The green is an accent color and the bio just lists his element as jungle because he lives in the forest and I didn't want to leave that field blank. I felt that the white spikes weren't enough; also, I wanted to use a contrasting color on the forearms and lower legs, but didn't have enough Mata green as DV had suggested, so I went with more white. Could it have looked better on the legs? Absolutely. The arms? Sure, definitely. But does it look good? I think so.

I know the green was supposed to be an accent color. I just felt that the MOC could've used more of it. Meh.

The build on this is rock solid. I do think the added white is a little distracting. There is just enough to make it a secondary color rather than an accent. I would say change all the white to gold, and change the weapon to the silver variant, but it does make the color s a tad more generic. Perhaps changing the armor to gold and keeping the white spikes?

Regardless, Fantastic work as usual, Chro!