“I am not here to make Predacon clones, but to make my own Combiners.”

“Thunderblast sent us some of your work; you’re no Shockwave- I wouldn’t even call you the next best thing, personally- but I believe we could make use of what you have to finish augmenting these five clones here.”

“Uhm… Thanks? But I want to create my own team from scratch.”

“What you want and what we can manage are unfortunately two different matters, in this case,” Downburst says. “As I said, our cloning facilities were destroyed two weeks ago, along with most everything we’d need to build a new team of combiners ‘from scratch’. You’ll have to make do with augmentation, and I need to get these five predacons combat-ready before our next battle, or Obsidian will have the heads of everyone in this room.”

He turned to Sprocket.
“I’m watching both of you…” He growled.

“I’ve got a light rifle that might suit you,” she says

“Light as in it shoots hard-light, or it shoots a small caliber.”

He turned to Sprocket.
“I’m watching both of you…” He growled.

Sprocket and Grommet are both silent, glaring at each other. Switchblade looks between the two of them.

“Light as in it shoots hard-light, or it shoots a small caliber.”

“Hard light,” Salvo replies. “It’s similar to the photon rifles the New Decepticons are using, but it packs a little more of a punch.”

but it packs a little more of a punch."

“Hrm, could be good, semi-auto I presume?”

“Sounds good to me. How much?”

Salvo charges 150 shanix for the rifle as she hands it to Laslow. 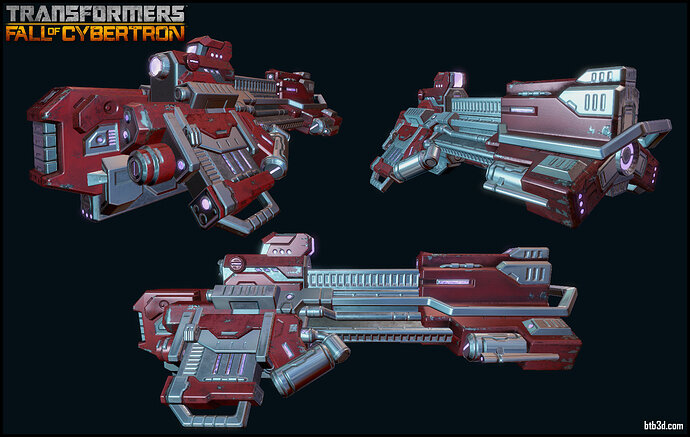 " ‘Go forth, my disciple, and shoot bad guys’. That’s in the Covenant somewhere, right?"

“Alright, off with you, now,” Salvo says with a laugh.

“of course ma’am! I won’t bother you any more.” Laslow says with a wave as he begins to walk out of the room.

Salvation rumbles as the autopilot begins to shut down the transwarp drive, and the delicate warp field that kept the Fleetcarrier from losing herself in the technicolor void between realities begins to fade away as the ribbons of green and blue forming transwarp space are peeled away like paper, revealing a pitch-black expanse dotted with far-away stars. Salvation trembles as she re-enters normal space, darting past chalk-colored asteroids and a pale moon as she decelerates as gently as her autopilot and motherboard could manage. In Little Iacon, Flyby grumbles as his drink slips out of his hand, shattering on the deck as he grabs onto a statue to support himself.

“Stupid computers…” he complains. “Why didn’t anybody tell me we were dropping out of transwarp?”

On the bridge, ■■■■■■■■■■■■ looks out the rectangular viewports as Salvation crests over the moon’s barren surface, revealing a deep green orb far ahead, marbled with veins of ice-blue water.

“Ladies and gentlemen,” Breakswitch quips from the navigation console, “welcome to OL-2006-2-C. A wonderful vacation spot for new couples looking for a romantic getaway, or a crew of [X] thousand dysfunctional misfits on a scavenger hunt to save the world.”

“You have reached your destination,” Motherboard drones in her characteristic monotone. “Driving directions will end.”

“Might wanna check her for viruses or something,” Broadband cracks.

In the Omega Conflux, the conduits on the Omega Key’s ancient surface begin to pulse, their cyan lights flashing in a slow, rhythmic cadence that the rest of the intricate machines in the chamber begin to churn and hum in time with. Throughout Salvation, the devices holding the holograms of the Allspark chirp as a ring of green light appears within them, slowly flashing in unison all across her length. Crew members stare in wonder at the display, or cluster before windows to look down at the planet below them. Carved into the world’s landmasses were thin circular patterns, etched into OL-2006-2-C’s crust eons ago and faded with age. A keen eye might even spot cyberglyphs wrapping around these strange rings, marking the artwork as being cybertronian in origin.

Slowly, the rings on the planet’s surface begin to come alive with a verdant glow, the same color as the lights that were now blinking all over Salvation. The Allspark holograms begin to display streams of ancient text and diagrams: verses from the original Covenant of Primus, formulas for cybermatter, and designs for machines whose function was impossible to determine.

If there was any room for doubt, Salvation and the Omega Key seemed determined to squash it: at last, our heroes had reached the destination shown to them on the holo-map. The original object of their voyage. The resting place of the next piece of the fabled Omega Lock.

Far away, the New Decepticon fleet darts through the void in pursuit of Salvation, enveloped in bubbles of warped spacetime, appearing to the thousands of New Decepticons crewing the ships as a hazy red-orange field. Salvation’s head, start combined with the slower speeds of their ships, meant that they would be arriving at OL-2006-2-C much later- their enemies, the heathens who stood in the way of their perfect Cybertron, may already have the Omega Key in their clutched by the time they arrived.

But Bludgeon was determined to pry it from their dead fingers, if that was the case. The warlord no longer saw the crew of Salvation as simple nuisances standing in the way of his vision; they were now the latest in a long line of rivals he had cultivated over the centuries, and he vowed to smite them in the name of Primus, and lay their bodies into the foundation upon which his new world would rise above all others. His student, Banzaitron, stood by his master’s side, and generals Obsidian and Strika prepared the New Decepticon legions for battle. Lockdown counted his trophies, eager to add more to his growing collection of prizes from past hunts, while Thunderblast schemed aboard her own vessel…

“She is quite the vessel.” Zepar said, a hint of sorrow in his voice.

Zepar’s gaze was suddenly drawn to the holograms of the Allspark and the view outside, “It seems the Omega Lock is near.” He muttered.

Zepar’s gaze was suddenly drawn to the holograms of the Allspark and the view outside, “It seems the Omega Lock is near.” He muttered.

“That’s good,” the pilgrim says, looking out a viewport at the planet below.

“What you want and what we can manage are unfortunately two different matters, in this case,” Downburst says. “As I said, our cloning facilities were destroyed two weeks ago, along with most everything we’d need to build a new team of combiners ‘from scratch’. You’ll have to make do with augmentation, and I need to get these five predacons combat-ready before our next battle, or Obsidian will have the heads of everyone in this room.”

She sighed.
“Fine, but only I and Brainpan have access into the lab.”

The surgeons clustered around the predacons turn and stare at Wildsong, shocked at the audacity of the request. Several other scientist within earshot of the sizeable laboratory also look down at the Autobot, a few of them snickering.

“Then what else do you want me to do at them? You have such a big team that seems to be handling the situation. Why do you need me for?”