If this needs to be under “ask,” please move it there.

This is something I have noticed in this community is how people see themselves in the M.U.
Most depict themselves as Toa. I have to ask, why is that?

Personally, I want to build one as either more humble, or a former Glatorian.

Hey, thanks.
SHUT IT!

So, why do most see themselves as Toa?

I don’t know what this should be under to be honest.

And I would say most people portray themselves as Toa because the Toa were the original heroes of the story, the most powerful ones and the most iconic imagery in Bionicle as a whole.

I’m a hero too, that’s probably because it’s cool, but I’m not a toa, considering the rules of my universe aren’t the same, so I’m what I call an “elemental master” but yeah, one of the most over powered.
So my theorie is that everyone want to be better than in is real life, they want to be as their dream, live incredibles adventures, leave their boring lifes ! And here’s a fact : the only goal of the lego themes is to makes us dream, even after the death of the G1 and 2, we’re still dreaming and that’s a thing we shouldn’t lose, dream, is the only way to escape our world. The imagination is one of the best thing in that world, so keep dreaming guys.

My Self-MOC isn’t a Toa…

Mine ain’t a Toa either, nor a Glatorian or anything else… Just some dude with a sword 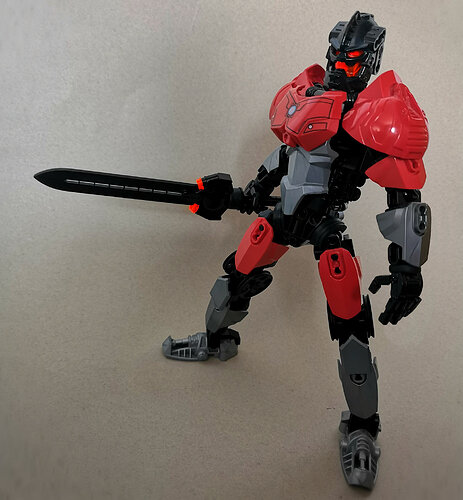 @Chronicler has a toa character but with our matoran Fa I believe is his main because he is the chronicler in our story of Karhi Nui. I of course am generic with a toa but have an alternate universe which is not a toa.

I have five “Self-Mocs”, each embodying a different facet of my personality. There is the obvious Steampunk Tahu, who I’d say I didn’t choose to be a Toa, he just already happened to be. I also have Toa Gavan, who embodies the good, brave, and courageous aspects I gave him, although I identify more with the Matoran version of him, which is the most canonical, as he is meeker and not as courageous. Then there is Toa Vani, the Toa who would like nothing more than to be a Matoran again. She fits the more compassionate, calm, and thoughtful side. Then there is Toa Navag, although Toa is a stretch, as he was corrupted by shadow, and is fascinated with trying to emulate the Makuta. He fits the darkness and hate, although exaggerated. So, I wouldn’t say I have a “Self-Moc” as much as I have a band of characters I can relate too.

My self-MOC used to be a Toa, but frankly I think it’s a bit cliche at this point. The Bionicle community has probably, at the very least, built double the amount of Toa that existed in actual canon.

As to why that is, I would say it’s probably because the Toa are the heroes, and they’re the ones with the super cool powers. Very rarely do you get a person who wants to make their character the powerless villager, or a hero past his prime. Everyone wants those awesome Toa powers.

It’s not wrong to build a Toa, but personally I’ve grown away from making them as a whole. It’s hard to build interesting characters when most Toa usually fit a pretty standard mold and only have certain sets of powers. I find it much more creatively liberating to build a character without the concerns of canonical accuracy or labeling. You could make the argument that you shouldn’t let canon dictate your builds, but I would argue that if you’re going to do that, you might as well just go completely original. Now I could just build a character who happens to have elemental powers, but I can put that character in whatever Bionicle-esque world I want.

I mean I am the rahkshi man.

Please ignore the fact that my self moc has been a WIP for over a year now.

I think most people choose to build Toa Self-MoCs because they’re the most common set type, are the most articulated, and are the most fun to build.

I think that a big reason is also that a toa is an easy template to start from for both design and story. Say you’re new to the mocing hobby in your early teens and you’ve mostly had experience building sets. You want to make a character to represent yourself, but the creatures and whatnot don’t feel right and you don’t have many ideas. Fear not, for you have the Inika build and a ton of lore to fill with original content. Just slap some new color scheme and you have your first original character in some unexplored location on Mata Nui.

Bionicle’s lore was accessible enough to partake in it.

In my case, my selfmoc started as a dragon as I wanted something
more unique.

Around that time on mocpages it was pretty popular to make MOVs of others’ selfmocs, so I tried to cash in on that and made new toa version that would be easier to reference from.

Obviously that failed, and the build was a bit fragile, so I went halfway backwards and built a simple yet sturdy lizardman. I started to write a story, so this version stuck longer, and I upgraded it over time.

Eventually I stopped the story and started another one. This prompted a new form for my selfmoc. Still reptilian, just promoted to dragonman. This is the version that has continued until today.

I always wanted my Sig MOC to be a Matoran, I just made him a Toa for the fun of it.

Edit: Come to think of it, my sig Moc might stay a Matoran since it’s more fun.