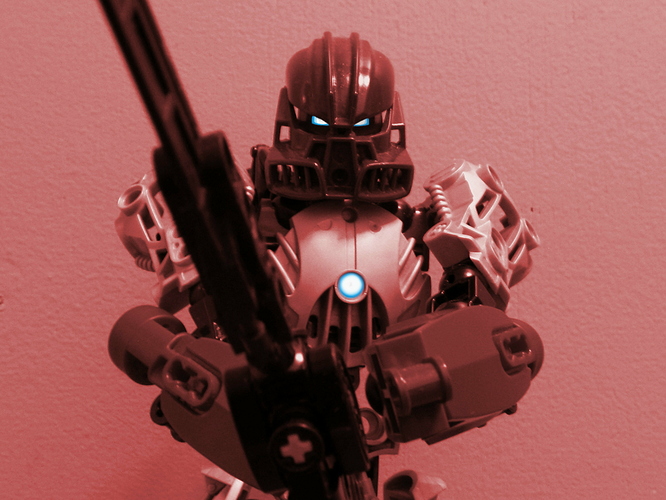 NAME: Falzer
RACE: Toa
KANOHI MASK: Miru (Noble)
GENDER: Male
AGE: 13,776
AFFILIATION: Toa Atel
LIKES: Smithing weapons, nice, quiet mornings, not being a slave
DISLIKES: Some loser named “Ahkmou”
BIO:
Falzer is a member of the Toa Atel, a recently formed Toa Team, tasked with defending the island commonwealth of Atel Nui. Brash, but noble, he makes a valuable asset to the team.
Falzer has always been more of a pacifist; He prefers to talk his way out of a fight, but that still doesn’t detract from his fighting prowess.
He dons the Kanohi Miru in Noble form, granting him the power of Levitation and allowing him to boost quickly along the ground.
Falzer spent his life as a Matoran living in Metru Nui after the evacuation of Mata Nui. He got by, working as a Blacksmith in Ta-Metru under the guidance of a Matoran named Brander, who taught him back on Mata Nui. Years later, he was unwillingly conscripted into Ahkmou’s Foundries.
Tired of Ahkmou’s oppression, Falzer decides to lead a coup against the ruthless despot. However, his plan fails miserably, and him and his comrades are brought before Ahkmou. Ahkmou decides that their punishment should be a match in the Colosseum against an infected Muaka. He also has the rest of the slaves brought to the Colosseum to make the coup an example of what would happen should the others rebel.
Several minutes into the match, Mata Nui, who had taken control of the Prototype robot on Bara Magna, had finally defeated Makuta Teridax by crashing the jungle moon of Bota Magna into the back of his head. Metru Nui began to fall apart. Ahkmou left the coup team to die as the other slaves evacuated. As the Colosseum crumbled, they stowed away in a secret area under the Colosseum floor, and had to dig their way out of the Great Spirit Robot.
Falzer and company were found starving to death in the wastelands near the GSR by a rescue team from the Order of Mata Nui, and were resuscitated. They were given new homes on the then recently established Atel Nui.
Most of the inhabitants on the island that recognized Falzer’s name did not trust him because of the coup, and Falzer became a loner. 120 years pass. Falzer is selected to become a Toa, but not the leader of a team, much to his dismay. Regardless, he takes the job and becomes a member of Toa Atel. 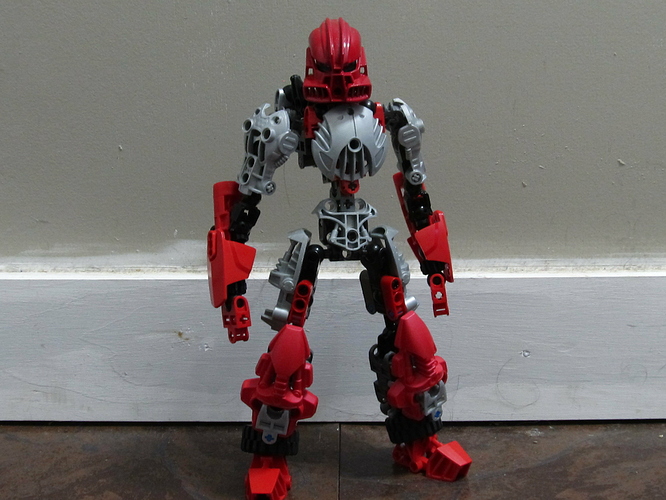 Falzer’s armor is laced with a special type of heat-resistant alloy, allowing him to engulf his body in a roaring flame that burns at 4,000 degrees. 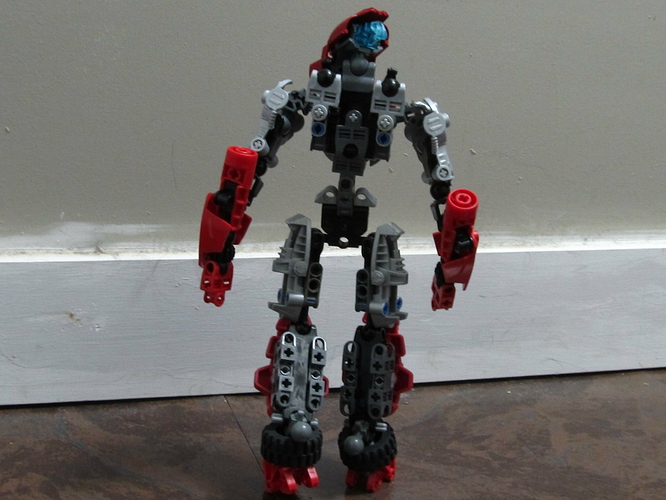 IMG_0275.JPG4000×3000 1.2 MB
While he’s not the most powerful member of Toa Atel, his lightweight armor gives him an advantage in speed, allowing him to preform “Hit-and-Run” attacks. 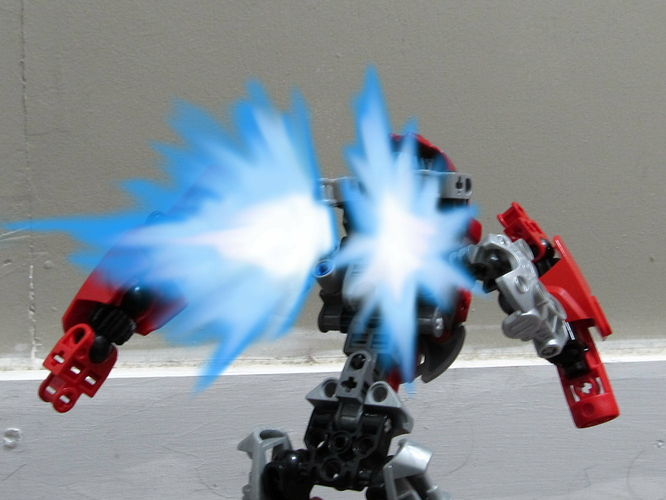 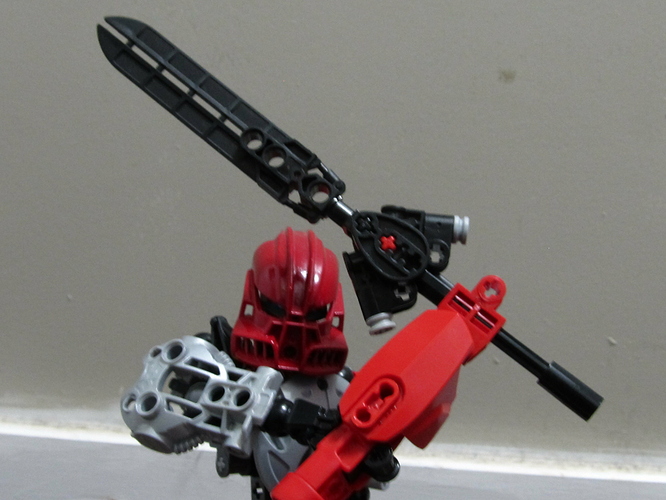 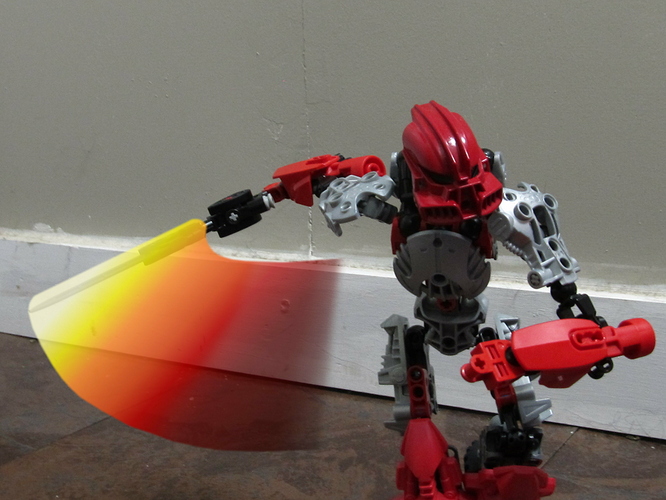 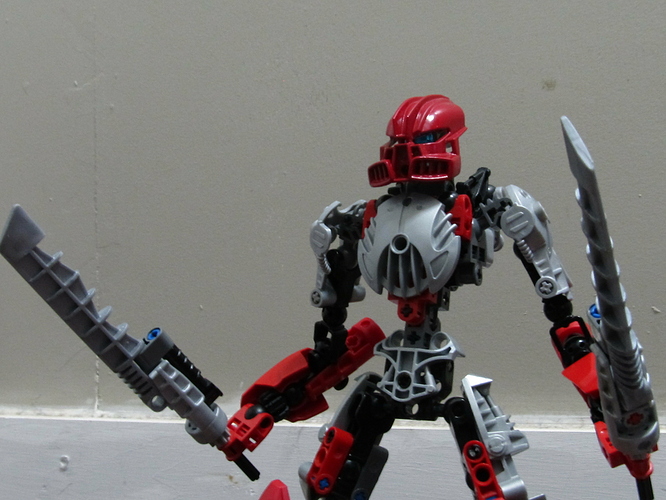 IMG_0278.JPG4000×3000 1.22 MB
Falzer has two secondary blades called the “Twin Embers”. Not only are they excellent melee weapons, but they make for impeccable ranged weapons as well. Exemplified even further by… 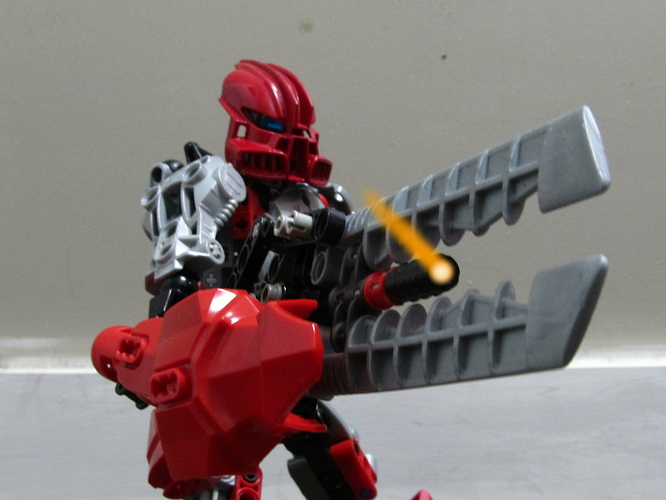 IMG_0279.JPG4000×3000 1.16 MB
…The Blitz Cannon. This weapon is formed when the Twin Embers merge into one. It’s melee capabilities are halved, but it’s projectile attacks… 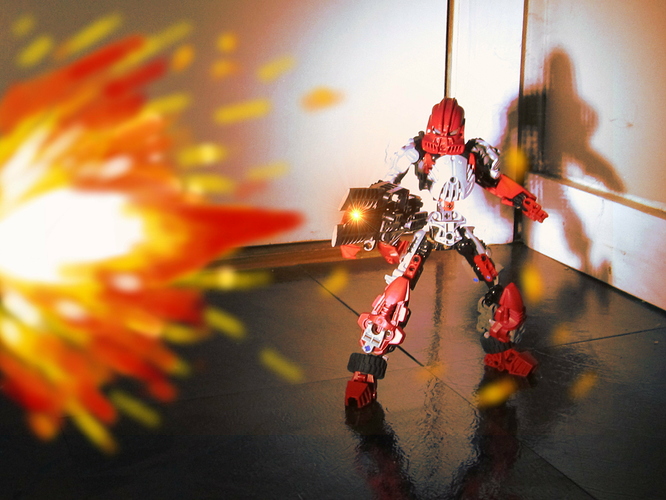 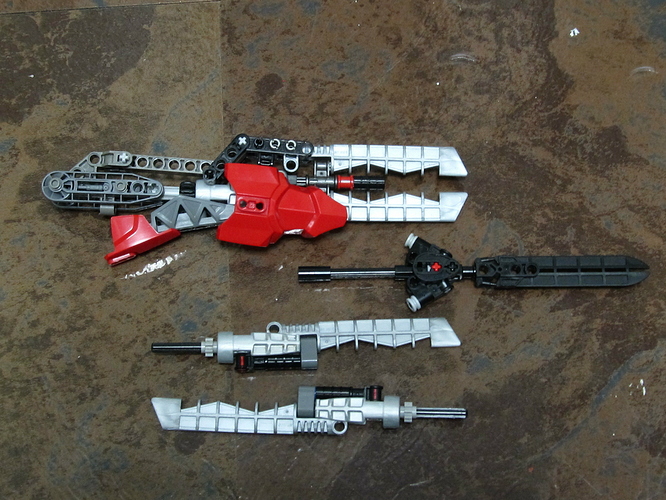 Cool looking MOC. The description and build of the weapons is a nice touch.

The equivalences between our self-mocs is rather interesting, both are more pacifistic, yours a toa of fire who’s fighting style is based on using his miru for bursts of speed, mine a toa of plasma who wears a kakama, and as such also uses speed to fight, as well, both appear to use their elemental energy to heat their blades, or in my case superheat.
A fight between the two would surely be a sight to see.

This looks pretty friggin cool man, I love it

Epic MOC! I really like the look of both him and his weapons. Also, nice Photoshop.

Isn’t that interesting… My SM has the same ability in the sword. Must be a popular one…

This is amazing! I love so many things about this. The weapons are fantastic and the toa himself looks fantastic. I’d love some instructions for the Blitz Cannon.

Nice build, and color distribution.
Really cool backstory, the way it fits into cannon is really awesome.
The weapons are innovative too.
It would help to cover up the bak of the pelvis a bit more though, and maybe add some thruster like builds onto the back to communicate the look a bit better.

Pretty cool! I like the torso design and the painted Noble Miru.

This is a pretty good moc and the special effects highlight the its best aspects and adds a bit of character, however I do feel that it has some problems. I’m not realy a fan of the waist and lower arms, the latter being the worse of the two, and this may just be nitpicking but the positioning of the shield piece on the torso looks a bit odd to me and makes it look top heavy. The shoulders and back also could use some work. Other than that I think the best part of the moc would be the weapons as they look great and fit the character well. Overall I give it a 6/10. Not trying to be harsh but there’s plenty of room for improvement as your skills as a mocist improve.

I like this. He looks a bit bare from the back, unfortunately. The weapons are nice variety and I like the visual effects you added to the pictures, as well.

Love the concept, but the build is a bit too simplistic for my taste. With some practice I believe you could make this into an amazing MOC. I thing the Blitz Cannon is the best weapon and would be really cool if you expanded on that more by adding detail or possibly a function.

I also kinda want to make a MOV of this. Do you have Instagram?