EDIT 6/27/2021: Just finding out now that it had to be linked to the entry topic, which is now closed. Guess I won’t be entering the contest after all.

Hello everyone, my name is MaximalCuboid (Cuboid or Cube for short) and I'm new around here! Been keeping tabs on the Canon contests for a while now, and with some free time on my hands, I decided to try my own luck...at the last minute.

But, without further ado… 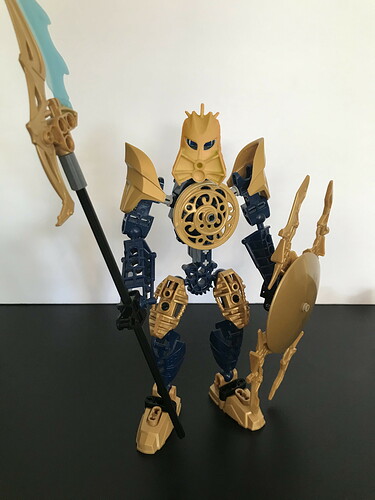 Ignoring the obvious photoshop-ing on the mask, I decided I wanted to go with a non-flat-gold-or-silver metallic armor on a few of them. I made her mask shaped as the Noble Akaku for the sake of “vision.” For the chest armor, I wanted to avoid the repeat of the Gahlok-Kal shield, so I went with the wagon wheel for the watery-flowy texture and matching with the “mystical” nature of the Mask of Clairvoyance. 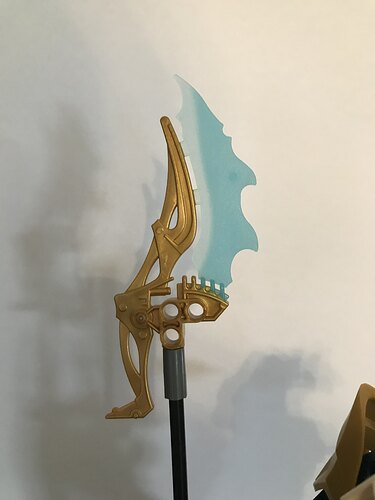 Her spear is a repurposed Water Blade. I was torn between using it for her spear or Kualus’s, but I found a more fitting build for Kualus.

Also since Gaaki’s the only one with leg pieces not used in the original Hagah, I’ll go ahead and add this height comparison. 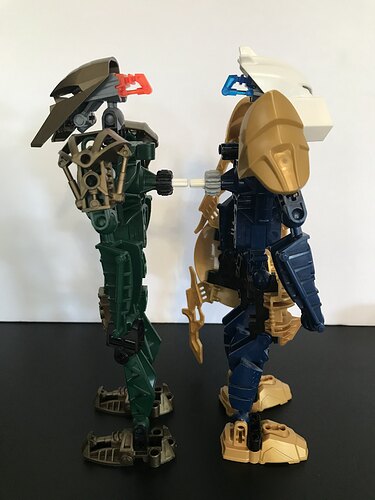 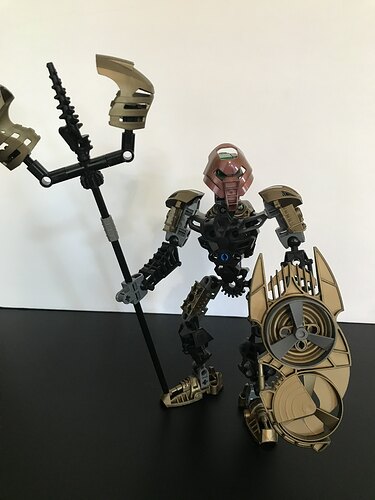 His Mask of Growth is shaped like a Noble Huna somewhat ironically, given that a Huna is meant to help one hide.
I gave him a bit of the Metru Grey as a secondary color to match his Rhotuka and to give a bit of contrast to the rest of his black armor. 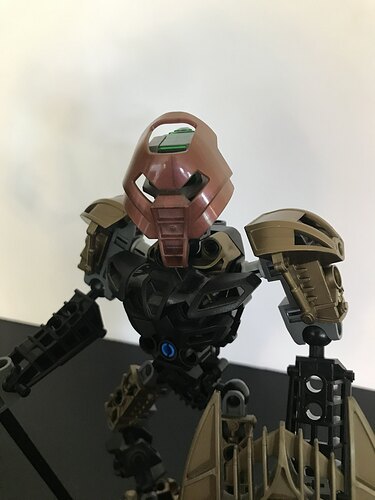 I gave him the Metru Matoran Torso as chest armor as a counterpart to Norik, since in canon, Bomonga is Norik’s deputy. If it pleases the judges, the Metru chest plate poking out from behind is flat dark gold, making part of his chest armor technically metallic, but if it is an issue, I’ll change it. 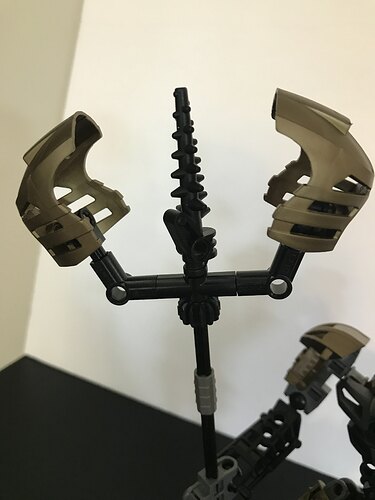 To make his Seismic Spear seem a little bit Earth-y, I made it somewhat reminiscient of a drill, with Whenua’s Drill in the center and the two Haus on the side meant to spin around. 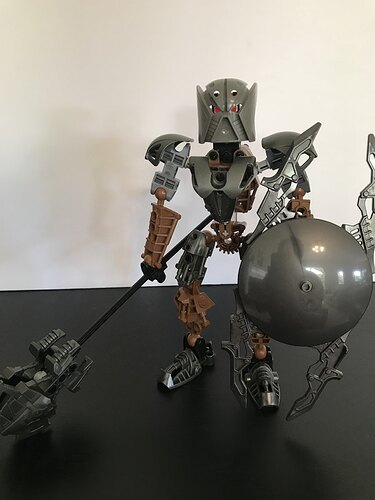 Similarly to Gaaki, I wanted to make him in the non-Hagah standard Pearl Dark Grey since I had the Metru Feet in PDG from Maxilos. His mask I made the shape of the Noble Matatu, relating to the mental power absorption of the Mask of Emulation (it would be made PDG in the final art). His upper limbs are metru grey, but this is simply just because I did not have enough Med. Brown Double Axle-Socket Connectors, so that can also be changed in art if desired. 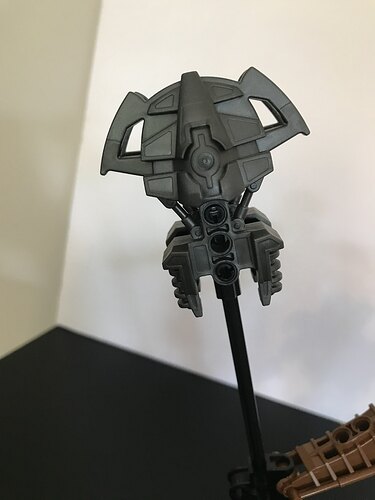 His Avalanche Spear is two of the modified Hordika feet together to make it pointy at the end still, but give it a bit of thickness meant for launching rocks.

While we’re on Pouks, I’ll go ahead and give a closer look at the custom shields I made for Gaaki and him since the Hagah shields don’t come in those colors. 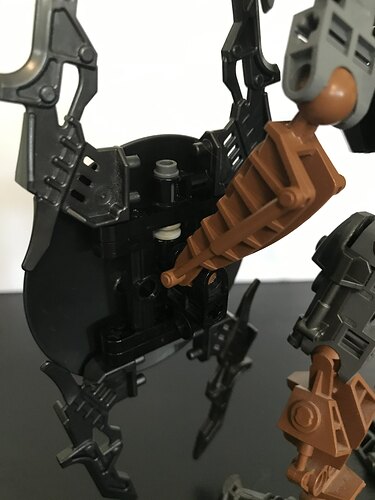 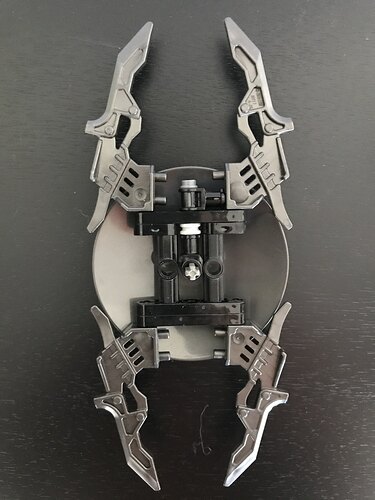 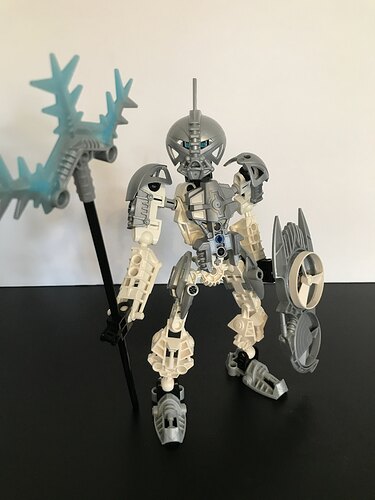 Kualus was the first of the Hagah I built for this contest and the one that made me realize I would be able to make some decent looking Toa. His mask is in the shape of a Great Rode, mostly because I liked the unison with the rest of his armor and the horn on the top. Through all of these, I wanted to avoid repeating chest and thigh armor, so I went with the Matoro Shoulder Armor for his thighs. 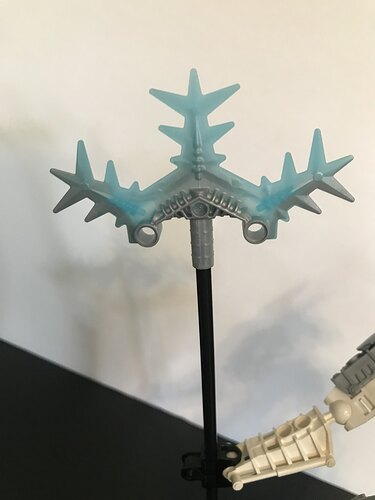 For the Sub-Zero Spear, I wanted to use the Ice Shield half because I thought it was an interesting enough reuse of the piece. I like to imagine that the ice on the end is able to reform into different shapes at Kualus’s command.

Here is a image of all the spears laid out to show none are longer than Norik’s and Iruini’s. 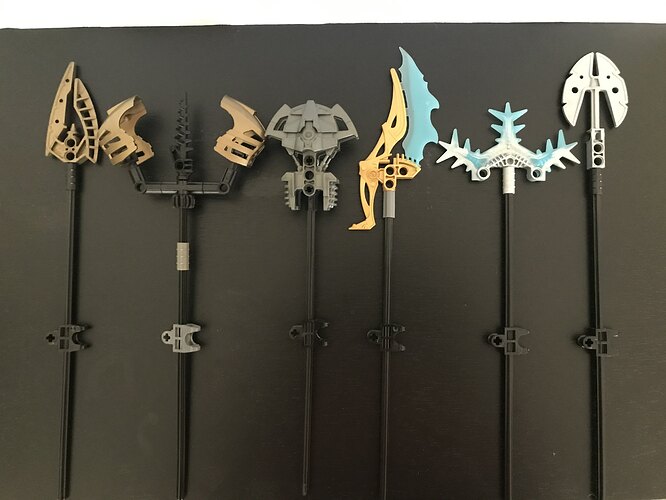 Ultimately, I had a blast scouring through my collection to be able to build again after not having MOCed in years. They’re not too outside of the box as far as builds, but I think the designs all fit together pretty well. Thank you for the opportunity, and I hope you all enjoy!

All of these are unique, but they still fit well enough with the other Hagah. Best of luck during voting!

Huh, i fully expected I would be the only entry to use that mask in gold.