Yeah this guy was mainly just a stress build but he actually came out quite well and Toalittleboehn actually really liked him! XD 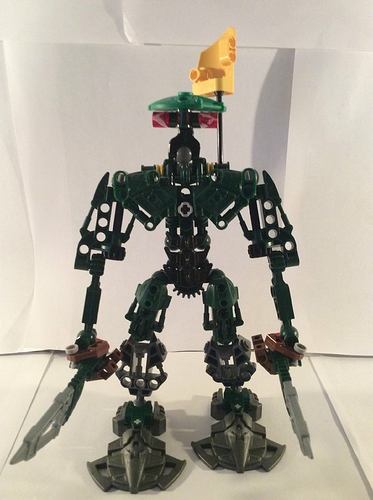 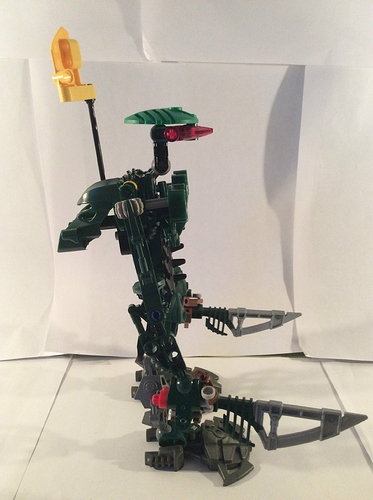 So as you can see he has a little hump/hunch thing on his back, no idea why just wanted to. 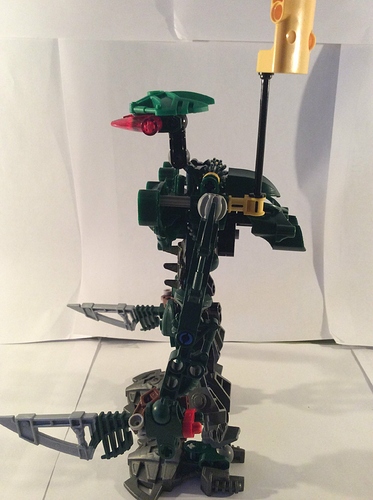 And here’s his flag connection, love the conversations that come with it. 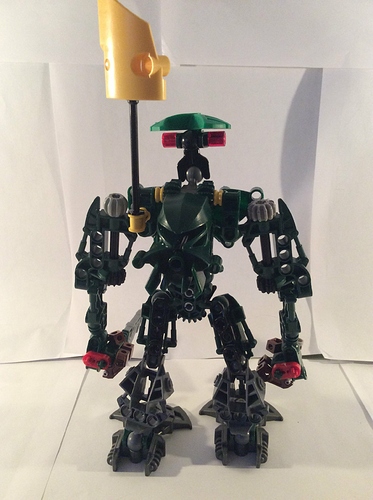 So this is what I like to call stress mocing, where I build some crappy moc to release stress so I don’t kill someone! Yay! So yeah last couple weeks been crap and it’s just getting worse.
Oh well at least he looks kinda cool, nice colour scheme and all, the funny thing is how I made him, I was trying to make a pet moc and ended up with a mini mayhem head on it but then I found a better looking one and didn’t want to get rid of the head,chick then resulted in me grabbing all of the dark green peices and building a custom torso for it based off of fitting the arms on, I mean even his name has a funny story behind it, I wanted to think up a scrappy funny name for him and the first one that popped into my head was Carl, which I found to work for him but I wanted it to be more scrappy, you can guess what happened next.

Ok so onto the description!

I thought I’d only ever find Kelratz hanging out in the part piles, much less living in them! So yeah one day I was looking for some parts and somehow came across this guy scavenging through them to fix up his walking stick, according to him he’s been there for years and I’ve never noticed him, a bit ashamed about that one, he calls himself a mini scraphem.
So yeah he’s a scavenger, he can build and repair pretty much anything he needs, albeit it coming out kinda junky looking but still pretty impressive.
He’s pretty old and does prefer to use a walking stick when walking, kinda like Nuck but only a lot more friendly and happy, but he can walk without one, he prefers to sit back and relax but that doesn’t mean he isn’t active, you got an adventure you want him to join in he’ll happily go, as said he is quite friendly, nothing can really bug him, he’s even good with Jetflare, heck he lets him rant to him, also he’s pretty jolly, loves a good laugh and he’s got a pretty deep one, he’s rarely ever fully serious, even in a life or death situation he can find some humour in the situation and lighten the atmosphere. Besides all of that. He’s quite good at comforting others and can be pretty deep and wise, he’ll let you tell him your woes and he’ll give you some kind of advice, and he does enjoy doing it and will use his old age as an excuse to listen, quite literally and I quote from him “I’m old, crotchety and prefer to sit back, I’m not going anywhere soon so come, tell me your woes.”
But due to his age he is somewhat senile (I think he’s faking some of it to mess with us.) mainly with names, he never really remembers them except for the first letter and even then he’ll typically just call them by a defining aspect/colour of them, such as with Tekan he calls spiky (which actually bugs him quite a bit but he’s given up on fixing it) sure he might try to remember it a couple times at first but he tends to give up quickly. He also keeps reminiscing about being in some war, the moc war of 44 he calls it, but because of how he is about it I can’t tell if he actually was or is just making it up. Essentially he’ll start reminiscing or such about the war and when someone comments on him about being in it he’ll say he has no idea what they are talking about and was never in a war, then when they get confused and say he wasn’t he’ll say of course he was, seen some pretty funny and confusing conversations come from that so that’s kinda why I think he might be faking some of his senility.
Now then the flag, that has gotten some amazing conversations from him, when asked where he got he’ll say he has no idea, when asked what it’s for or is though he’ll say it was his war flag and then the whole entire I was in the war/I wasn’t starts up, it’s funny.
He is an amazing sword fighter though and spits the only time he actually moves that fast, most of the time he just walks along but when fighting he moves pretty fast and I have seen him with guns, he’s good at cleaning and rebuilding them and and his shooting isn’t to bad so that’s why I believe he was in the war at all.

Other attributes: Two blades, spin able arms, can repair and build anything he needs as long as he has parts, loves to scavenge for cold parts and will keep any he finds until he can use them, especially gold parts, old, very good at comforting, sometimes has very deep and wise moments… Now that I think about it he’s kinda like a mini mayhem turaga, only not a leader.

For ToaLittleboehn you don’t have to use him if you don’t want to or if you do want to use him but remake his whole entire build I’m good with it, just wanna see what you think of him. 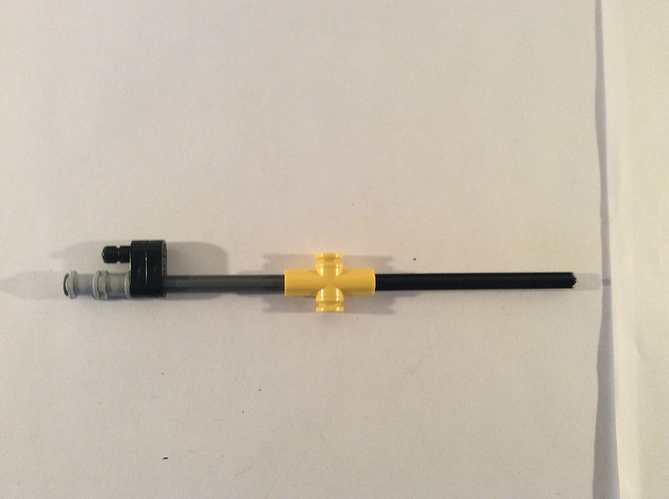 So you remember how I was talking about meeting him when he was scavenging for parts to fix his walking stick? This is it. 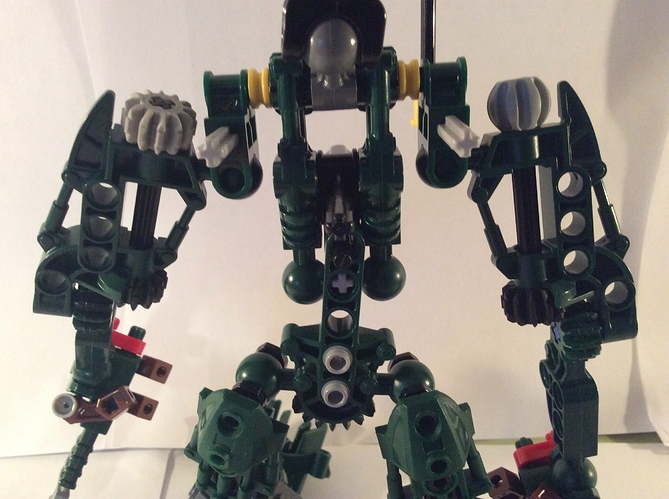 And yes that is a pole/stick/whatever it’s called peice. 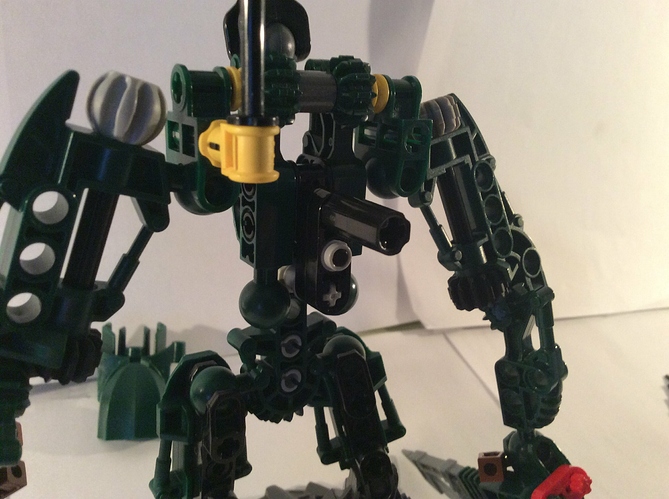 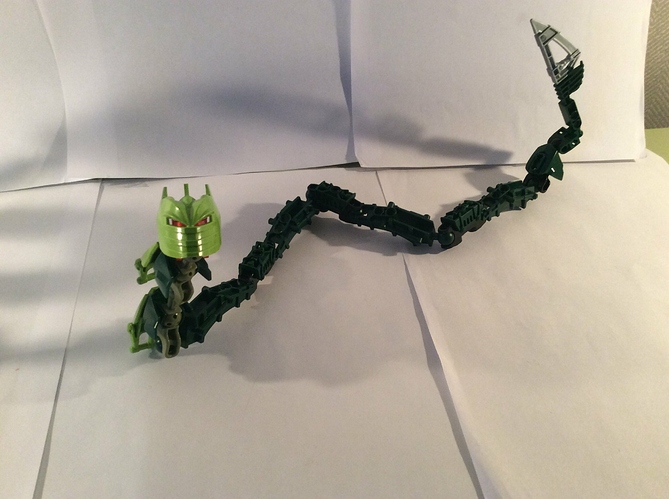 So this is the pet I was building when I found a better head and ended up making Skarl too.

Loki is a scrap snake, a species that quite literally feeds off of scraps and pieces, the fresher the part the better it is, but they never eat other living beings. he’s quite young for one despite his size, these guys can live for thousands of years and they just get bigger, the biggest recorded one was about the size of a great being, height and width wise, luckily it was dead.

Loki was found and raised by Skarl since he was snakelet. Because of this he is of above average intelligence compared to other scrap snakes, as a species they are intelligent enough to be difficult to trap, able to understand speech, albeit not usually speaking it, and can learn somewhat. Due to Loki being raised by Skarl it allowed him to learn how to speak and become used to it, not being raised by other scrap snakes, and gave him an intelligence actually rivalling most other sentient beings.
He was named Loki for a reason, he is extremely mischievous, loving to play pranks and make deals, all of which lean in his favour in such a way one typically doesn’t notice at first, and usually in a way that allows him to eat some of the others parts, I learned of this after he made a deal with Tekan and then attempted to eat his arm because they were fresher parts, luckily I managed to find out and fix the situation but usually it’s Skarl who does that and also warns others about him, in his own riddely way.
When asked about his opinion on Skarl he’ll call him an old fart that’s always ruins his fun or something like that.
As said before Skarl typically ends up dealing with the situations that arise from Louis deal before it gets outa hand and then Loki will insult him and call him names like old fart and such for ruining his fun, yet despite some of the ways he acts towards Skarl he is actually extremely protective of him, if you hurt or upset Skarl Loki’ll make sure you pay and never do it again, and he’s dangerous, he has a bored tail and he’s very agile, fast and has a strong constricting grip. He is also usually found around Skarl, especially when they’re resting, which he’ll wrap around encircle around/near him.

Personality: mischievous, prankster, vain, boastful, thinks a lot of himself, very protective of Skarl but doesn’t show it, tends to insult everyone unless they can prove to be his equal in their mischievous ways, kinda shady.

Other attributes: Bladed tail, agile, fast constricting grip that is less than that of a boa constictor so he can’t kill you but most can’t break out of his hold,very intelligent but uses it for mischief and deals that work in his favour.
Not much of a fighter typically, prefers to wait for his perfect moment to strike and hide again, kinda assassin like.

He talks in www.htmlcsscolor.com/hex/A8A8A… colour in www.ffonts.net/Monkey-Snake.fo… font and yes, he does do the stereotypical lengthening of s’s that snakes have I.e. Thissssss.

For ToaLittleboehn same as Skarl, if you use Skarl then here’s this guy that comes with him, don’t have to use both, just want to see what you think of these two scrappy Mocs.

(Really funny thing with this guy is that after uploading him I got a joke comment saying how Gresh must’ve angered Mata-Nui! XD) 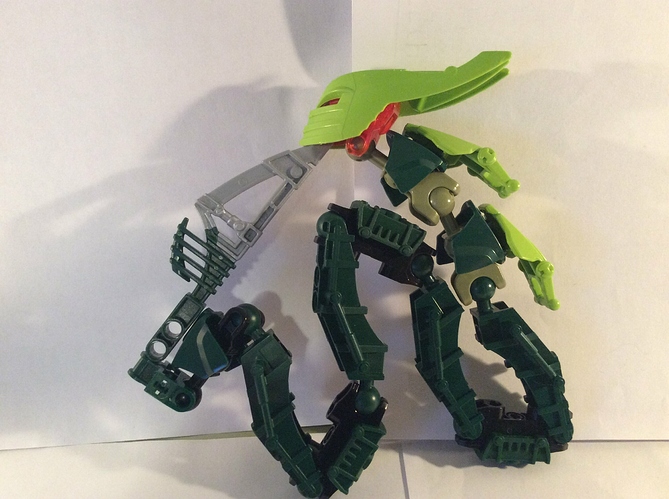 Why is he carrying my face around on his back?

@Gringat Bwhahahahah! That question! Also it’s supposed to be a hunch/hump, from… Old age(?) and that was the only peice that matched up with his colour scheme and worked. But still XD!

@Gringat XD! But yeah he was a fun build, just started holding with green parts and most of the were either hordika or toa mahri Kongu so somehow he came out, I used most of the leftovers on Loki too!

@Ghidora131 Oh man I just realized what his pose look like! XD
Also that works so well for him because that’s also how he’d act!

@BBricks Obviously you didnt check out the description fully or look at the links on Kelratz, they’re all made for a contest/entry thing on deviantart by another mocer who does a comic with these characters called mini-mayhem’s who have that type of head, that head is one of the rules if you want to get a character in (pets are allowed for a character but only one per)

My face is a hump from old age? Jeez… you know how to make a guy feel unwelcome.

seriously though, cool stuff. Love that you broke out the old Hordika parts for him.

I agree with that statement XD 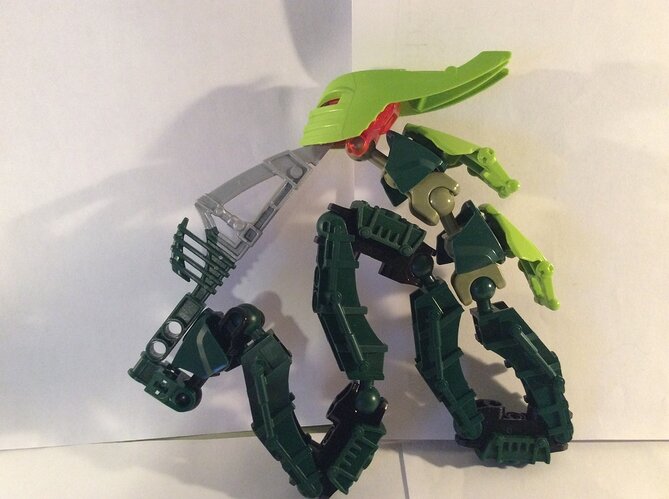 Hmm… What to do next.

Why-why do all your MOCs share that same face? /s

The MOC is okay, besides the back it doesn’t really being anything new to the table, However it’s not bad.