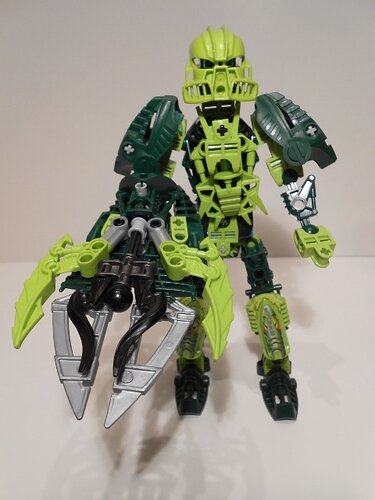 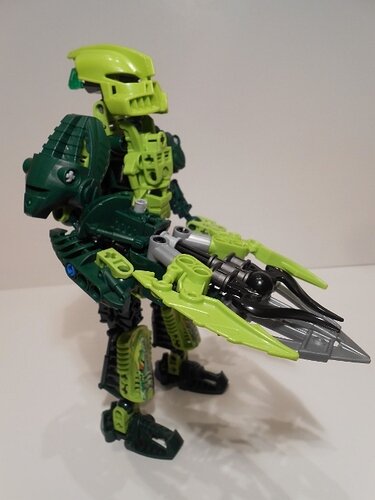 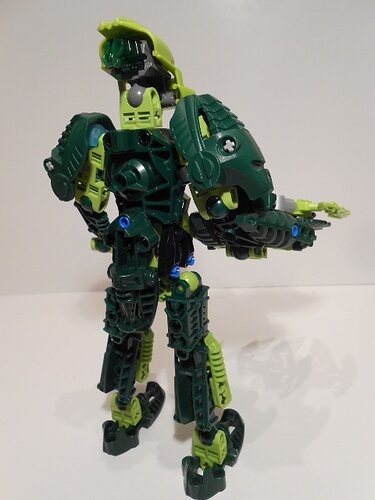 Powers and Weapon: As with all Skidawkie, Blisstil has three different powers. Her first and primary one is her evolved power of the Crast, able to able to repel objects and beings alike with a powerful, invisible force. Unlike the Crast, her power can affect multiple targets, allow for much more significant flight and/or levitation, and can absorb incoming shockwaves that might otherwise repel her. Her second is the Ta-Metru Kanoka trait, strengthening her repulsion capabilities. Her final power is the inaccessible element of Air, giving her even greater reflexes and agility…

Unlike most Skidawkie, due to the nature of her weapon, Blisstil’s crossbow is not unusually balanced or disproportionate. This crossbow in particular fires Ta-Koro styled spears, with Blisstil typically adding in her repulsion power to give more oomph behind each shot.

Personality: Having failed her people, Blisstil has become very panicked, impulsive; a repel first and maybe ask questions later kind. Often charging into battles without planning or thought first to get the jump on them, sending as much destructive force as she can. After all, can’t be bothered if they’re dead first right? Though she is trying to get a better handle on herself, after several instances of almost sending allies to the stars.

Background: At some point in time, Blisstil was created by Makuta Equinox along with the rest of the Skidawkie. She had received the gift of the Crast which, like the Hau, would end up being a coveted ability of their kind. The Hau were grand defenders, but the Crast could not only defend, they could retaliate. Send whatever their enemies throw right back at them, to let them know their own suffering. They were warrior heroes, just below the Hau.

But on that fateful day, after a fiendish Makuta had finished playing with them, the Crast failed. The hordes of the Visorak were too great and numerous for even they to repel, falling to the monsters. And when Blisstil saw they were faltering and the spiders were coming in, she fled. Had she stayed, if not death, then certainly mutation would have been her fate. Though this never made her feel better, for even if she died, perhaps some more of her siblings could have made it out.

For this, she went into exile, never to rejoin her kin. Instead, she found herself among a decently large village of Matoran that lacked the number of Toa to effectively protect them. The Toa weren’t exactly trusting of this stranger, but eventually warmed up to her and allowed her to help protect the Matoran. Though she hid the nature of her gift and altered her mask, given their dislike for the Crast. Perhaps through the Toa, she will learn to control her panic and impulse. 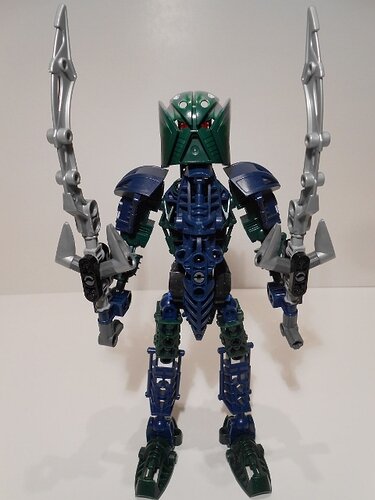 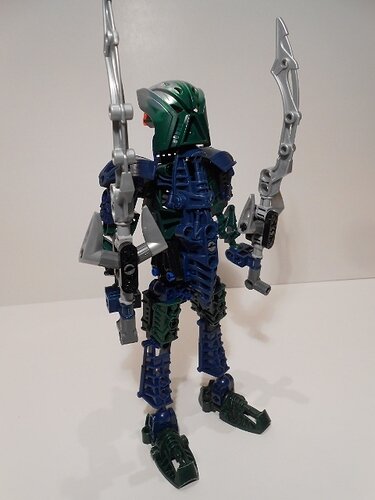 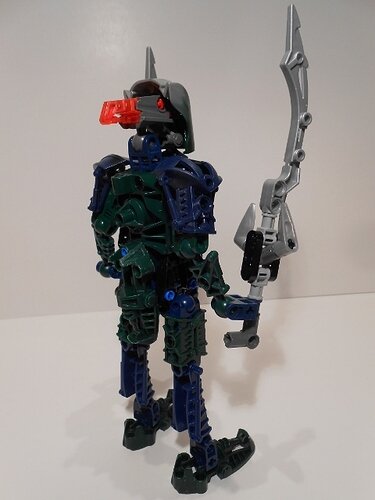 Powers and Weapon: Like other Skidawkie, Entrupia has three different powers. Her primary is her evolved power of the Mask of Incomprehension, able to scramble written, spoken, hand signals, and even telepathic languages. If concentrating hard enough, she is even capable of scrambling what another being is seeing or feeling, scrambling the language of ones senses as it were. Though is unable to do the reverse, that is, translating gibberish. Her second is the Le-Metru Kanoka trait, allowing her to run and jump farther than most of her species. Her third power is the inaccessible element of plantlife,giving her an immense knowledge on plants and how they could be used.

Entrupia tends to attack with two unbalanced, disproportionate short swords that are sort of designed like giant sai. These weapons are usually coated in some potent poison.

Personality: A bit eccentric and sinister, even before the loss of her home, Entrupia takes pleasure in destroying the lives of others. Be it through poisoning targets or spreading gossip, she will confuse and scramble the universe. She cares not in whose name she does it for, but grows hesitant if it would aid the Makuta.

Background: Makuta Equinox created Entrupia and the rest of her ilk at some point in time. For her gift, she received the Mask of Incomprehension. And though Skidawkie rarely, if ever, find a mask to be immoral as all have uses for good, this is one of the powers that challenges their thinking. At times, communication even with the same language was difficult enough. How much worse then to have that scrambled further? Though a use would be found, to be code generators and message scramblers, they generally weren’t thought of well.

Perhaps it is no surprise then that some aided the Makuta when he came, censoring those who opposed his plans. Only for most of them to be destroyed as the rest of their kind once his playtime was over. The Visorak cared not if you helped the Makuta or if you opposed, you were all just things to mutate.

Entrupia learned this the hard way, for helping ruining her kin, she in turned got ruined even more. Or at least, perhaps she should have been ruined more, but a brother named Cozren rescued her from the Visorak and they escaped the chaos. With some wandering and a successful mission on a small Brotherhood outpost, the Order of Mata Nui approached the two and indoctrinated them into their organization. Though the Order is weary of Entrupia. 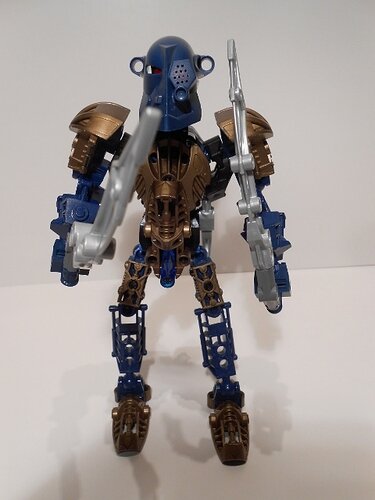 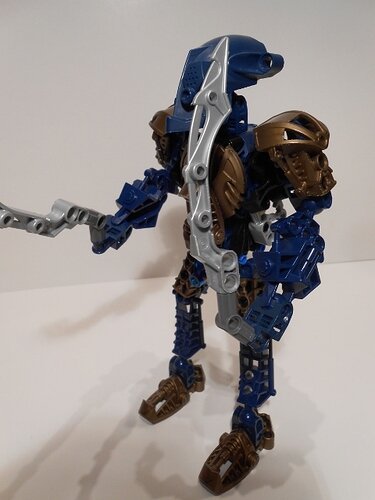 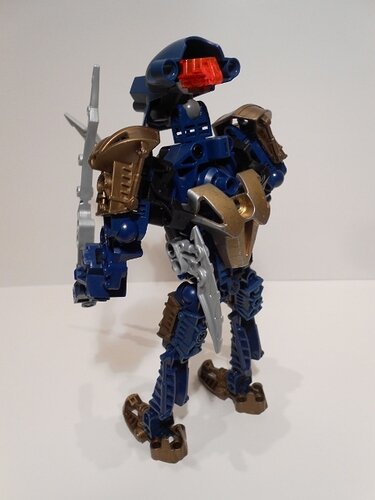 Powers and Weapon: As with all Skidawkie, Cozren has three different powers. His primary is not the same as the mask he wears, being of a Noble Mahiki and not the Mask of Charisma. Though this does mean his power is halved, the only parts he loses is the distance he can create optical illusions and the ability to remove other’s illusions. It otherwise is powerful enough to act like the noble version of the Mahiki. In tandem with the noble Mask of Charisma, it makes his illusions more believable to the target, making them agree with what they’re seeing.

His second is the Ga-Metru Kanoka trait, allowing him to change directions mid-jump or fall. His final power is the inaccessible element of Psionics, shielding his thoughts and mind from others. For weapons, Cozren uses an unbalanced, disproportionate short swords and carries a backup knife.

Personality: A cheater, liar, and master of deception, Cozren trust only a very few people. While he too wants nothing more than to protect his people, his methods are the exact opposite of Actsiom. Whereas Actsiom looks for the truth by truth, Cozren looks for truth through lies. Hurt and shamed from his race’s history of being gullible, he will do anything he can to cause oppressors to know what it feels to be humbled by those weaker than you.

Background: Cozren was created at some time by Makuta Equinox, placed on the island of Miyrt with his brothers and sisters. He was given the gift of the Noble Mahiki, to deceive the eyes with trickery. Those with illusion based powers varied wildly in what they did in the rapidly developing Skidawkie community. Some where spies, some entertained, others tricksters, others engineers, and still others philosophers. For them, their powers were not a limit for what they could do for society, perhaps because they could deceive them all into doing whatever they wanted.

Cozren himself was a mix, dueling between entertainer and philosopher. Often debating with Rode users over the merits of truth and when lies would be preferred. And after what happened with the Matoran, for being an illusionist, he was surprised he could have been so easily tricked. Swearing to never again fall to such foolery.

Yet he would be foolish again. When that fiendish Makuta came, Cozren trusted him not and tried to get to the bottom of what he was really after. He tried to use Entrupia to learn more, who seemed really fond of the Makuta, much to his concern for his old friend. And by the time he realized what was happening, he failed once more and the Visorak came to their island.

Cozren was no warrior, but fought anyways. Tricking may spiders into jumping off cliffs and into the blades of his brothers, but could not deceive himself that they would achieve victory. So he fled, rescuing his old traitorous friend along the way. And though the travels to Entrupia may have seemed random, for Cozren it was very purposeful. Finding clues, following trails to learn more about the Brotherhood of Makuta and to exact revenge and justice.

When he and Entrupia had managed to successfully infiltrate and rob a small Brotherhood outpost, it was impressive enough for the Order of Mata Nui to come for them. They had been keeping tabs on Cozren’s activities, and with his abilities, he could be a useful asset in stopping the Makuta one day. Cozren would join them on the condition that his friend, Entrupia, be allowed to come with him. He wished to redeem her somehow, even if she didn’t seek it herself. The Order eventually allowed her to serve them, but nothing more. She was to be kept in the dark and, should it ever show that she is betraying them, to be killed on the spot.

Author’s Notes: …So you might be wondering as to some background information on this. I have made a lot of Bionicle characters. A lot of them. And I got really bored of the existing races, but didn’t want to keep making unique race after unique race. I wanted something that could be easily versatile, but had a lot of consistency. So somewhere in mid-2012 to early 2013, I created this species; a blend between Toa and Skakdi.

Of course, the species has been rewritten a couple times since then, but this is the latest incarnation. I eventually introduced them to my primary Bionicle RP group and allowed them to be used by anyone. And I’ll do the same here, if you like the species and would like to use them, or like some of the ideas and feel like tweaking them here and there, feel free to do so.

I suppose this is going more into designer’s notes now, but as for their builds, I probably should have incorporated CCBS on this one. It would make them a bit more accurate to how they’re described…kind of, the shells are a bit big, but almost all Bionicle armor is covered in pistons…Bah.

Anyways, please let me know what you think and what improvements or changes you would make to this race.

Blisstil is easily my favourite here, but good job on all of them.

Blisstil is easily my favourite here, but good job on all of them.

Thanks. Build wise, I’m somewhere between Wanebb and Blisstil, but character wise it’s a very hard mix for me to decide.