Skirt of Snakes - Cataloguer of Creatures

This is a character portrait for a temporary character played by one of my friends in our D&D campaign. Her original character was briefly captured by a Death Knight, so while rescuing her, she played a tabaxi wizard called Skirt of Snakes, or Snake for short! 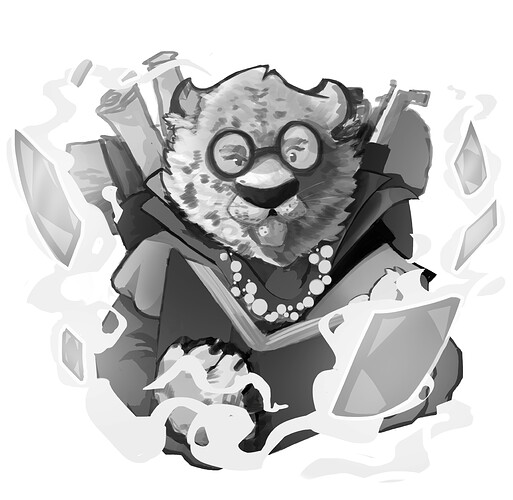 Snake was once a member of the Arcane Order where she studied magic in the school of Illusion. Afterwards, her personal work drew her away from the Order and she became an independent travelling researcher.

Now Snake wanders all the lands of the world, studying and cataloguing every beast and creature she can find and authoring her own tome.

Our party met Snake on a mountain in the Frozen North while trying to rescue one of their own. She agreed to help them free their friend in exchange for some payment and a chance to study some of the more unique members (like Connie, as he is half dryad and half demon). She also took a particular liking to Renn, our goliath barbarian.

The party has crossed paths with Snake many times afterwards, and she’s been a favorite of the group. She proved valuable in foiling an evil lich, helped rescue Connie when he got trapped in another dimension, and most recently helped transform Renn into a human after a strange reincarnation.

Unfortunately, she had to miss a meeting with her publisher to do so! We paid her handsomely in return, of course!

Snake uses magical tarot cards to do most of her casting and carries many scholarly implements with her at all times.

If you enjoyed this character spotlight, have your cookie:

briefly captured by a Death Knight

It was quite a while ago, but we sort of got the jump on him and got a few fireballs in, so he went down pretty quickly.

Felt pretty good too, considering he ambushed and fireballed us before.