When have Anger and Fear ever been shown to be released as blasts? Can you elaborate on what you mean, exactly?

In the movie, Kurahk released a blast of Anger energy at Tahu, making him attack Gali. And earlier, Turahk hit Pohatu with a blast of Fear energy when he tried to rush to Onua’s side after he had his strength drained by Vorahk. Turahk later hits Takua with a blast of fear at Kini Nui.

That’s just a visual depiction of their powers.

They still fired blasts, and you asked when that was shown, so you’re welcome.

However, the power is still generated by the Rahkshi, and does still affect the Toa, so a ‘blast’ may still be happening, albeit an invisible one. Hakann’s mental blasts were likewise never expressed in a visible form.

I know this may not be a precise answer, but it may give you a few strings to pull for any research you may do.

Also in the comics every time the Kurahk and Turahk are using their powers it’s shown as a blast that strikes another being.
Case in point: 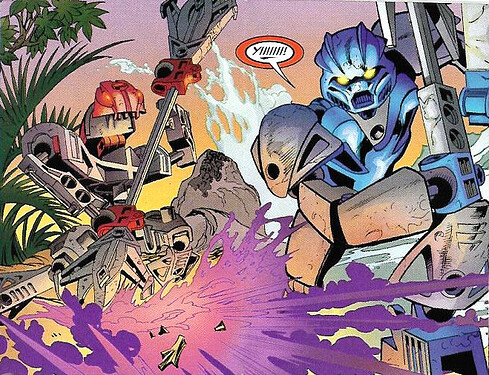 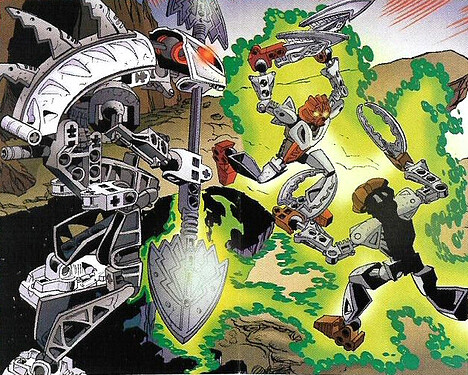 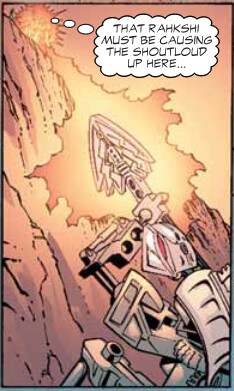 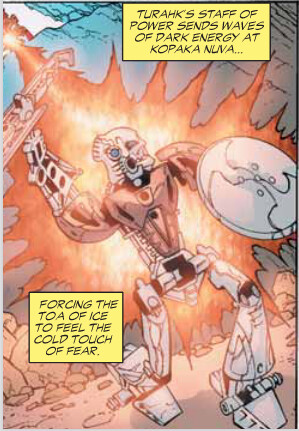 I also checked the MoL novel, when the Turahk zaps Pohatu and Kurahk zaps Tahu, it’s depicted as dark energy striking them.

Yes they absolutely can use their powers as a blast of energy if they want to.
As other have pointed out we see it depicted and described as such numerous times throughout different media.

Yes the glowing masks are non-canon, but that is because they have been explicitly stated to be only artistic choice for the movie (and only for the movie) as there was a need for visual indication that a mask is being used.
The same is not true for Rahkshi powers.

In addition to all this, Greg has confirmed that not only can these abstract powers be formed into a blast, but they can be sent through the earth just like in the Rahsksi commercial. However Rahkshi of those kinds of powers choose not to do so usually.

Q: Last night I found the Rahkshi opening clip from the mini-CD on BZP. I saw Lerahk, Kurahk, and Guurahk stick their staffs in the ground and send their powers toward Takanuva. Can they really do this? It’d be sorta odd to send Anger or Fear through the ground.

A: I am sure they could, if they wished to, although that is not how they do it in the movie – but energy is energy, after all."

Okay, well now my question is, what is the point of your question? Whether they’re shooting a “blast” or just directly targeting you, the effect is going to be the same.

I ask this due to all four powers being able to induce specific mental states as Teridax once did to Matoro.

Well this seems to be the reason why the poster is asking this, though I don’t know what that means…

If I were to make a guess, in the book Teridax used those powers on Matoro without any visible blasts, his mind just started freaking out with those mental states before he even knew Teridax was possessing the Maxilos robot.
Sleep and confusion haven’t been used very often in the story and the original poster was wondering that since Teridax didn’t use a blast to inflict Matoro with them, were the Rahkshi capable of using their powers as a visible blast or were these powers invisible with the result the only proof they happened.

I expect if a Kraata were to use these powers they would be used similar to Teridax’s method since they don’t have staffs to channel blasts through, plus a kraata would probably want to stay hidden while it put someone to sleep or confuse him. A Rahkshi wouldn’t care less if someone saw him blasting someone with their staff, their overall presence of terror and fear help them quite a lot I’d imagine.

Aah, now I get it they meant this passage:

“Now! thought Matoro. He took aim, prepared to hurl ice at his guard. But then he suddenly grew confused. What was he doing here? How could he trigger his powers? His body felt weak and slow and all he wanted to do was sleep. His mind was awhirl with emotions, rage one moment, fear the next.”

Well the answer seems to be that it can either be used like Teridax did, or through a blast, whatever suits the situation.