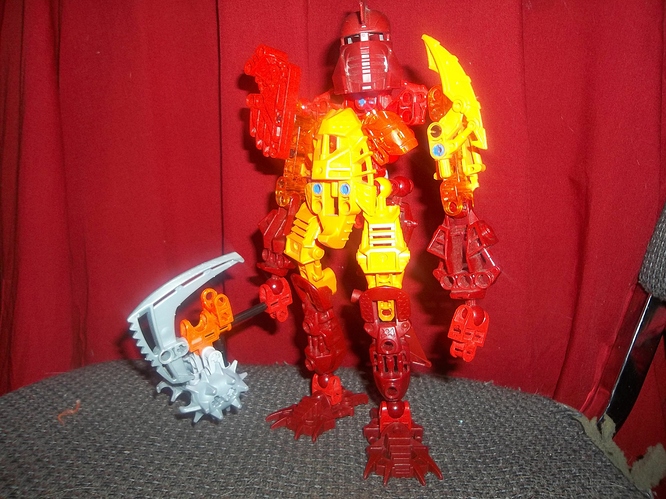 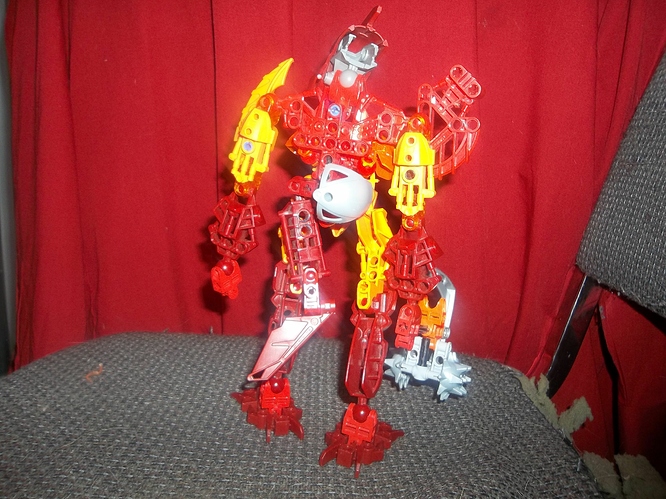 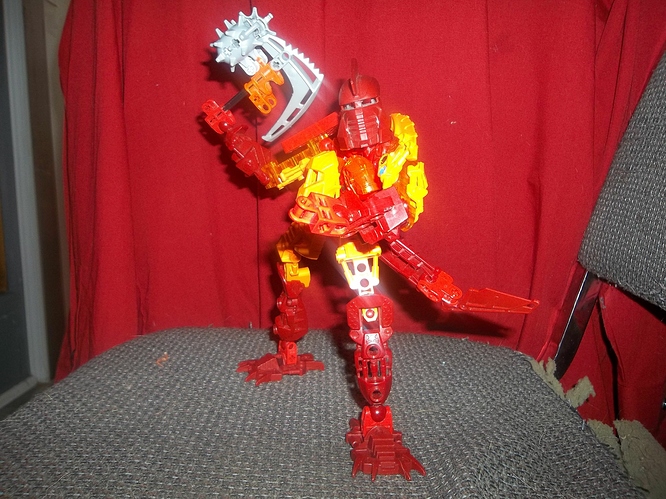 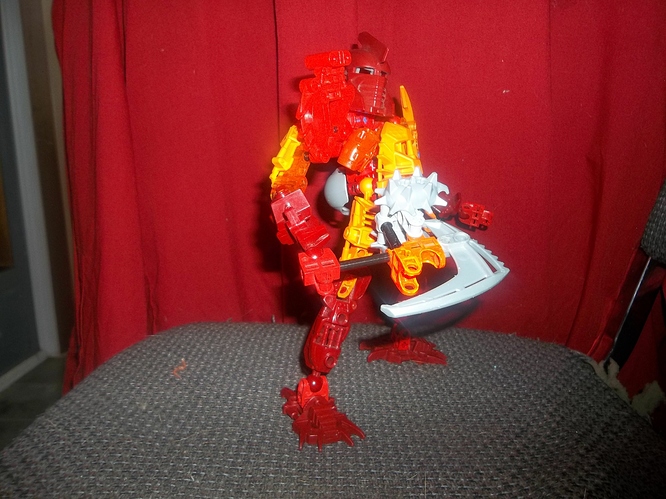 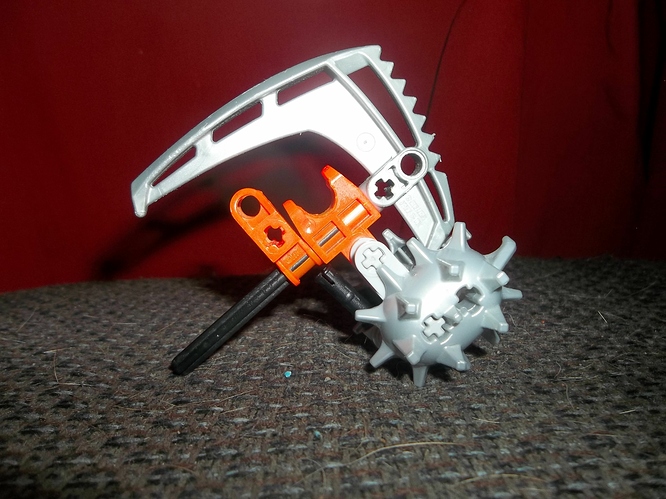 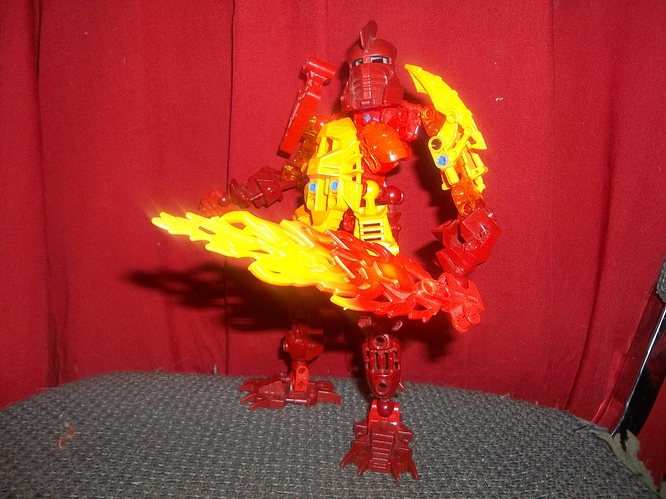 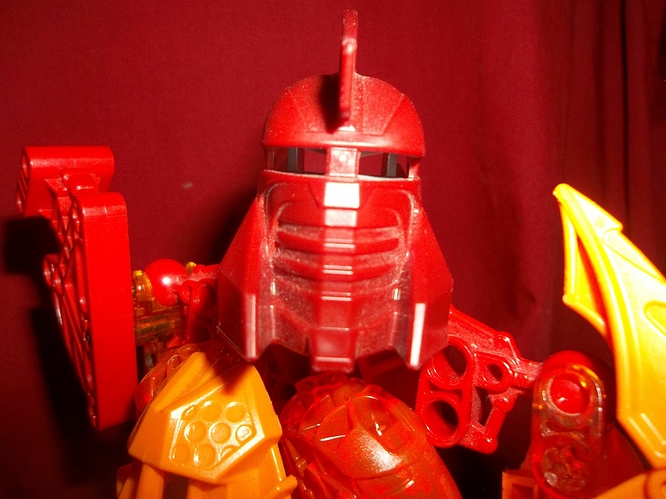 Name: Sol
Occupation: Toa, Titan, Sub-leader
Element: Fire
Team: Toa Guardians
Weapons: “Mjölnir, Hammer of the Forge”(Actual name)
Mask: Adapted Armored Mask of Shielding
Powers:
Weapon: His Hammer, Mjölnir, was made by Sifer to funnel the power of fire through it for Sol himself, the name came from Sol as well. it has the ability to fly through the air at his will, he can fill it with so much energy that it can explode on contact but the hammer itself remains intact, sending only the head and fire out.
Element: his elemental power is self exclamatory but sometimes he can take any sword like weapon and super heat it to over 60,000 degree’s to make it his own personal hand held weapon. unfortunately this also has a time limit for this because of the fact that the swords never last long and the fact that because he wasn’t born a Toa of fire the heat can still kill him.
Mask: His obvious mask power includes the ability to shield incoming attacks but through this he has had to learn to train himself to be aware of his environment, this has resulted in him being able to protect from all sides but the fact that sometimes ha can’t sense an ambush till its too late is still a fatal flaw…
History: Originally Sol was a monster tamer Taming a Spikit that showed AMAZING powers over air that normally aren’t in Spikit. This wasn’t easy to hide and eventually the New Threat found him and ordered the Spikit turned over…When Sol Refused he forced the Spikit to run and battled his hardest. the new threat beat him and mangled his body leaving him for dead to die a slow painful death. Siferius, now a part of the Resistance at this time, found him and had him transported back to the Underground. when Sol finally came to he found his new body not only a little disorienting but also found he now had the ability of fire, which was unusual considering he was originally an Agori of Air. he took to this new form in strides and even found his Friend Spikit again. it wasn’t long before Sol realized that the resistance needed his Toa powers after an attack by The New Threat nearly ravaged all three of the Current Toa, he went out and helped defeat the enemy and became a hero in the Underground. he Now leads his small sub team of Toa, called “The Destiny squad” each giving themselves specific Items to show their different types, his is Known as the Mark of the Titan. with him and his two team mates now a part of the team he hopes that nothing will take away what he see’s, this all goes away however when he finds A loved one in an enemy he has to fight.

OK! So…first things first those of you who are gona complain about the lack of eyestalk for these next three I have one thing to say…these pictures are Prototypes, before I updated them. so yes they may lack Eyestalks but its only because I edited them after the fact. also this was mostly based off of Destiny’s Sunbreaker’s only because it seemed an interesting Idea at the time. this is probably the first and ONLY character (Besides Kudo) that is a single type although there maybe more to come so stay tuned!

I like his hammer, but everything else looks messy. I’d suggest modifying his legs so that they’re less restricted.

I like his hammer, but everything else looks messy. I’d suggest modifying his legs so that they’re less restricted.

yes that came to mind and is still a problem…

Just keep developing it. You’ll make look fantastic as you go. My self MoC used to be not much to look (it was horrid), but I focused on the specific parts I could make better until I eventually got something I was happy with.

My self MoC used to be not much to look (it was horrid),

Not a self moc here but I can give you a link to my self moc if you would like!

but I focused on the specific parts I could make better until I eventually got something I was happy with.

that’s how things work! this one is gona be a little more difficult but its gona be done eventually…the legs are still the only issue out of the entire thing…