Well, originally I was searching for pictures of the Toa Mahri I once saw displayed in the Aquariums of Sea Life Speyer. Unfortunately I don't have any.

But there's also a good thing about it - on my search I found some pictures of old MOCs from little me that I had completely forgotten about ... not that they're worth remembering...

So I thought I would share the pictures of some of my oldest MOCs with you! Yay!

So, the first two I didn't forget about - the photos are hanging on the wall in my room. I built them in late 2003/early 2004 aproximately. So I was 7 to 8 years old. (they're photos of photos, so sorry for the quality)

I think this was some evil guy, but I'm not sure.

A Rahi frog. I think I had a name for this, but I forgot.

Next a MOC from February 2006 by 9 year old me. I really have no idea what it was supposed to be. A monster I guess. A dragon perhaps. Notice the perfectly executed colour scheme!

And from May 2008 by 12 year old me I present to you ... Mutated Nuparu? I think I might even remember this one dimly. He definitely was an enemy.

So yeah, that's it. I definitely had a good laugh on these when I saw them.

I suggest we play a game: Guess what sets were used to build these and come up with some names for them.
A tip: I used Bionicle sets only.

It's really satisfying to see how far I've come in terms of MOCing since then... uh, right?

@decepticonaiden You wanted to see these?

Yes I wanted to see these! They're adorable! They remind me of the MoCs my brother and I would make and play with!

Yeah, those times when you just quickly cobbled something together to have a new enemy for your Toa to fight... Those were the good days.

Reminds me of when I built Godzilla out of the Toa Nuva. I thought the world of that back when I was 5 but if I were to look back on it, I'm sure I'd just laugh =P

the first one looks like it could be one of those fan-made canonized Rahi.

These remind me of my old mocs...
Ah, memories.

These are really odd.

Yeah, I guess simplicity wins. If only because the smaller the MOC the less room is there to mess things up.

I also have photos of my old MOCs, so I know the feeling when you re-stumble across them! Those look much better than mine though

That rahi frog was one of the best things I've ever seen. It's so cute! I don't know why, but I always found the Hau cute.

Something from October 2002 which makes this probably the oldest MOC I have pictures of - and I have to say it actually doesn’t look too bad. I mean, I even managed to keep a colour scheme. 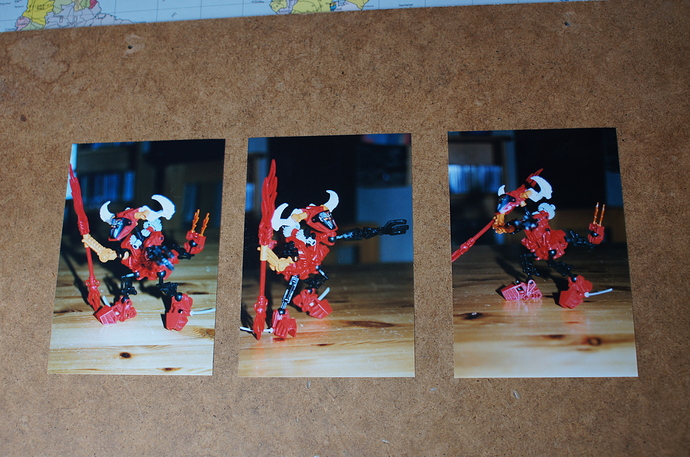 And probably the worst MOC ever (if you can even call it a MOC) from April 2004. I seriously have no idea why I took a picture of this. It looks like Spiriah’s attempt to improve a Nui-Jaga. 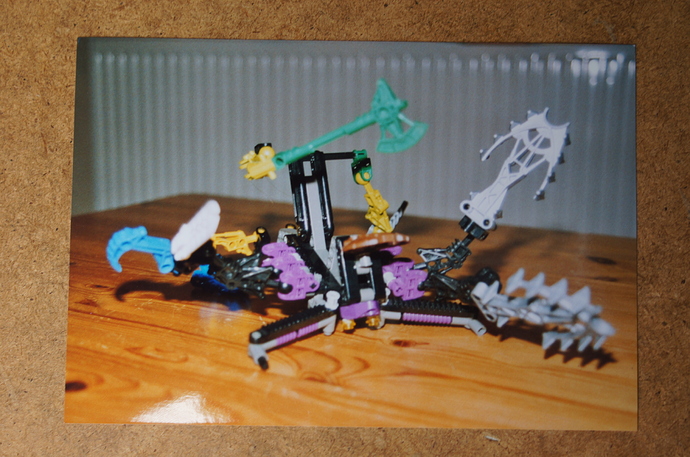 Interesting, better than my original Mocs

That first one looks like a Voodoo Heads prototype!

I think this was some evil guy, but I’m not sure

Is he… The silver evil guy?!

Also the Rahi Frog reminds me of a midget holding 2 knives up that’'s charging at you.

If I saw something like that I would laugh, cry, scream and die (Both die from laughter and die from the midget stabbing me).

Try rebuilding those. I would love to see them.