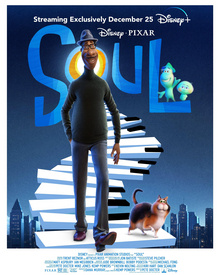 Docter began developing the film in 2016, working from his contemplations on the origins of human personalities and the concept of determinism. He co-wrote the screenplay with Mike Jones and Powers. The film’s producers consulted various jazz musicians including Herbie Hancock and Terri Lyne Carrington, and animated its musical sequences using the sessions of musician Jon Batiste (who created original compositions for the film) as reference. Soul is the first Pixar film to feature an African-American protagonist.

Soul premiered at the London Film Festival on October 11, 2020. Originally intended to be a theatrical release in the United States, the film was released to stream on Disney+ on December 25, 2020, and was theatrically released in countries without the streaming service. It received highly positive reviews from critics, with praise for its animation, story, voice acting, and music. I watched the movie with my family virtually yesterday. It’s a good movie. It’s different from all the other Pixar films because of the main character being a adult and the mature topic of the meaning of life and more. What do you think of the movie guys.

Heard good things about this movie. Thankfully, Disney didn’t bother pulling another stunt like Mulan. Gonna add it to my list of things to watch.

Once I sign up for Disney again I’ll have to see this. Still waiting on marvel and more original stuff.

The movie looks pretty good. I haven’t seen it, but I’ll watch it if/when it goes on on demand

It came out on Christmas Day so you can go check out.

what’s with all the hyperlinks

I watched this with the family on Christmas. General consensus was that it was a little above average for Pixar, and we wanted to see more of the great before.

I watched it today with my family. Overall, I enjoyed it. There were some really interestingly animated scenes, some good humor, and I liked the message/theme.

It was decent and had some fun ideas but I can’t say it was very memorable or special. It was just kinda ok.