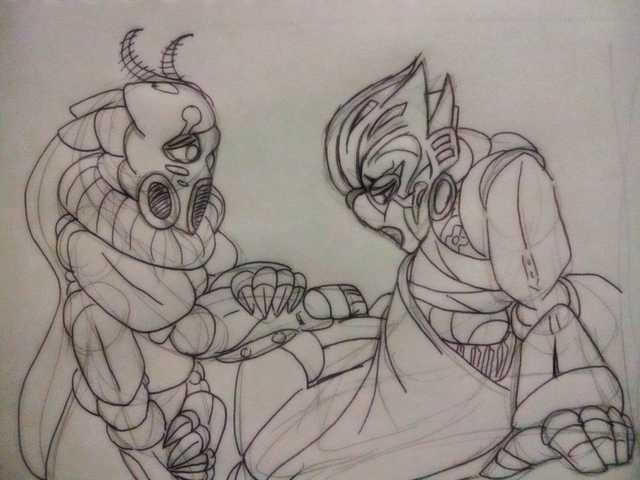 The hissing of the waves, the sharpness of sand. Broken pieces of armor, endoskeleton, and gears, washed upon the mossy shoreline. Soon followed by the beaten and battered body of a weakened and frail figure. One whom had not been on this world in what seemed like eons. Ichor dripped from his joints, as he strained in effort to move and catch. His joints cracking and gears whirring harshly as he fell to his weight. The tide washed over, beginning to bury him in sand. “Lewa…?” A voice had called; as a shadow had encompassed the toa. Lewa could barely make sight, and soon his vision had faded to black.

In the dreams and night tremors the toa slept, he recalled the memories of his past and present. He was Lewa, the spirit of air and jungle. Herald of plant life and wind. Something, or someone, had summoned him from his home, and where he was little was known. His last memories recalled him encassed in harsh light, and awakening with no memory on a strange and foreign world. He awoke with questions, and in a home much strange and different than any he had seen. Tapestries and masks hung from walls decorated in sigils, the room enlightened with candles and lightstones. Lewa looked over himself; his mask cracked and body badly broken. Albeit well patched with makeshift plating and cloth bandaging.

“I see that you are awake.” A voice had called, from another room as bowls clattered to a tray. Lewa reached for something to defend himself, finding a dagger on the stand next to the bed. She turned the corner, her body with moth and rahi features, with reddened eyes. Two of her free arms crossed over her chest as she set the tray down. “Is that how you treat one who would assist you?” She asked, Lewa did not lower his weapon. “You…you’re a makuta?” The toa asked, “but all the makuta were destroyed…weren’t they?” She sighed, giving a condescending smile, “You’ve been gone for far too long…much has changed…”

The makuta was kind, as she removed the bandages to clean his wounds. The ailments she used stung with a heat, as it restitched the biomass between his joints. “Careful!” Lewa barked, the makuta taken aback before redressing the arm. “My apologies.” She pleaded, “It has been some time since I have healed one of your kind.” Lewa sighed apologetically, giving a thankful smile. “So it really has been one million years since we disappeared? There haven’t been any other toa since then?”

“There have been…” The makuta began to explain, “After your disappearances, there was a war between the Great Beings. Despite the first twelve toa, there wasn’t enough of a saving grace. Velika’s forces were too great, and the toa found themselves over powered. Two of the Great Beings gave their lives to revive our species, as we held a greater chance against Velika’s threats. The war lasted ten thousand years, both sides seeing great loss. There was even an attempt immunizing the toa— matoran, agori, and glatorian, by uniting them into a singular species. When the war ended, we makuta were given the freedom to live as we please, and as self punishment for our past sins we exiled ourselves to our own island. We don’t even give ourselves names.” Lewa lowered his head, losing all tension except guilt. “I’m…so sorry…” The makuta gave a patient sigh, resting a hand on the toa’s knee. “It was our punishment for ourselves. We are the only ones that deserve to feel guilt.”

Afternoon had come, Lewa examining his reflection in the makuta’s mirror. His body, albeit broken, slightly changed as well. Perhaps an imprinting of the new species he belonged to. An Agoran. He looked at the makuta, as she was dressing herself. “What of the other toa?” He asked, as the makuta presented clothing she had made for the toa to wear. “You were the only comet to see fall.” She said painfully, “Either you are the only one left alive, or the others are elsewhere off planet.” “And what of the other…agorans?” Lewa asked, standing up; “Shall we head to mainland?” The makuta replied with urging the toa to remain on the bed. “Your injuries still need to heal, and it is forbidden for any makuta to leave our island. You will not be a stranger to us for the meanwhile, and the provisions we have are as equally yours.” Lewa smiled a bit, but a deeper depression still loomed. At least for now, he was at home.