Suggest Something for me to Draw

I’m not the best artist and I’m bored so send me some art to draw. You can send MOCs, pictures or anything. Just don’t send me memes or anything that’s against the rules. I have a cartoony art style so if tell me to draw something serious well… I’ll try my best.

Edit 2:
I will be checking back on this every now and then so even if you see this in a week you can still post a suggestion.

How about a futuristic armor set with some bionicle flare

@Cyosana
Hope you’re not disappointed. Tell me how you like it.
Bob the Future Man 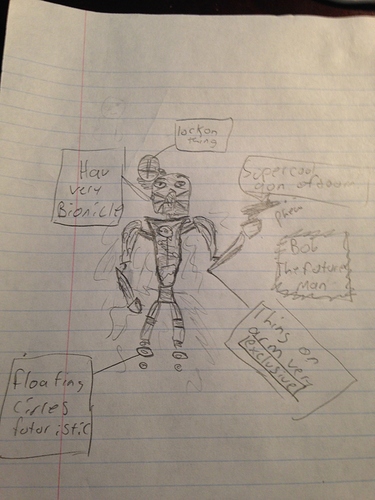 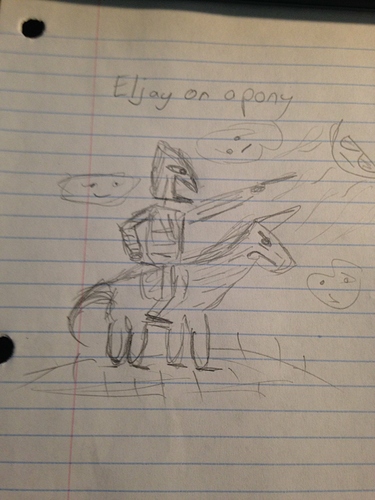 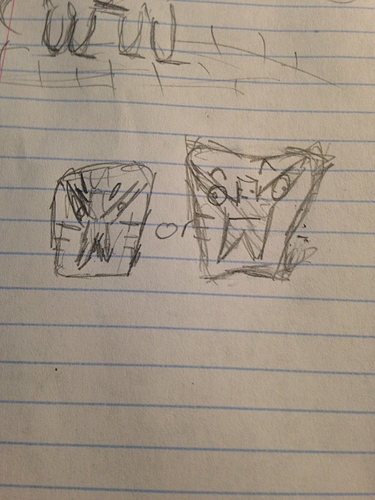 Could you draw mata nui fighting a dinosaur? 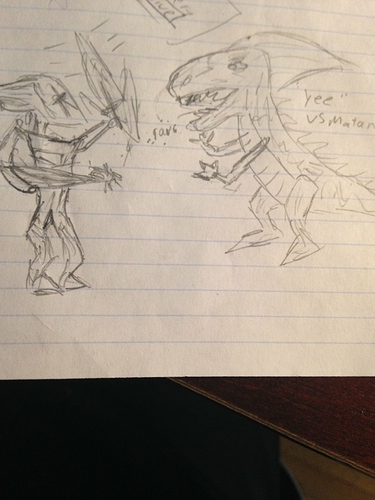 @Toa_Vladin I have no paint out my house
@ProjectLegoAnimation it takes awhile to upload to my computer from my phone. I will begin yours now .
2 Likes
Toa_Vladin March 19, 2017, 5:03pm #7

make me a paint with my self-moc

This is my self-moc, Vladin. When I build him, I wasn't a very good mocer, that is why I want to build him simple, to reflect my experience. [image] I will not tell you all his backstory, because is TOOOOOO long. He was found on a beach by Toa Tahu, unconscious. Tahu take him to the city of the Mask Makers, where he became his apprentice. One day, Tahu send him to find another 5 Toa who don't have a Toa Team, to became apprentices for the other Toa. He find and chose Ghabix and Mark (a Toa of Air and one of Stone, his cousins), Rena, a Toa of Water (Vladin fell in love with her), Termo, a Toa of Air and Octavian, a Toa of Earth. Togheter, they fight for justice and freedom to save the island by the evil Makuta, (alongside with the uniters). This is his standard backstory, you will find m…

Hey there AGAIN! I am here with a brand new self-moc! This is Ghabix, the self-moc of my cousin. He is my very first green moc! I really like his backstory. Ten years ago, Ghabix fought with his brother, Antifall, in the Okotan Civil War. He left his brother on the battlefront, because he know that the war will destroy the island. His armor was crashed. He go to his cousin, Vladin, who gave him new armor. In present, Ghabix was the first Toa Who entered in Vladin's team, the Toa Epsilon. Pictures: [image] Ghabix's nickname is "The Hunter". [image] [image] Killing my Moess-Moc, Raanu. [image] A better look at Raanu. [image] With his cousin, Vladin. [image] With his girlfriend, Helinox. [image] See ya, Ghabix!


and his other cousin

Hey there! This is my third member from my Toa Team: Mark, Toa of Stone. [image] His backstory is unknown. When Vladin made his Toa Team he even didn't knew that Mark is his cousin. Yes, the third one. [image] I am not very happy with this moc, especially because he have two thin swords and he have a lot of keet-orange in his armor. [image] [image] With his cousins. Ghabix (green) was the one who told Vladin (red) that Mark is their cousin. [image] With his little brother, Darven. Darven is a Le-Matoran, and Mark was a Po-Matoran. Don't ask me how is this possible... [image] Now we can see how Darven is very annoing. [image] Goodbye Mark!

I know you’ve already have two requests (you don’t need to do this to fast, just take your time), but could you draw the Kanohi Ignika (Mask of Life) in your cartooney style?

EDIT: Never mind, you have three other requests now XD
Oh, you posted one of them. my bad

@ProjectLegoAnimation Sorry if it’s oddly shaped, I just wanted to draw the face.

It’s fine! I think I prefer… the one on the left more, but they’re both good!