The Super Sentai Series (スーパー戦隊シリーズ Sūpā Sentai Shirīzu?) is the name given to the long running Japanese “superhero team” genre of shows produced by Toei and Bandai and aired by TV Asahi, that is used as the basis for Power Rangers. (“Super” refers to their use of mecha, and “sentai” is the Japanese word for “task force” or, literally, “fighting squadron” and was also a term used for Japanese squadrons in World War II.) The shows are of the '“tokusatsu” genre, featuring live action characters and colorful special effects, and are aimed mainly at families. This series is one of the most prominent tokusatsu productions in Japan, alongside the Ultra Series, the Kamen Rider Series, and the Metal Hero Series.

Power Rangers is a long-running American entertainment and merchandising franchise built around a live action children’s television series featuring teams of costumed heroes. Produced first by Saban Entertainment, later by BVS Entertainment, and currently by SCG Power Rangers LLC, the television series takes much of its footage from the Japanese tokusatsu Super Sentai, produced by Toei Company. Its first entry, Mighty Morphin Power Rangers, debuted on August 28, 1993, and helped launch the Fox Kids programming block of the 1990s, during which it catapulted into popular culture along with a line of action figures and other toys by Bandai. 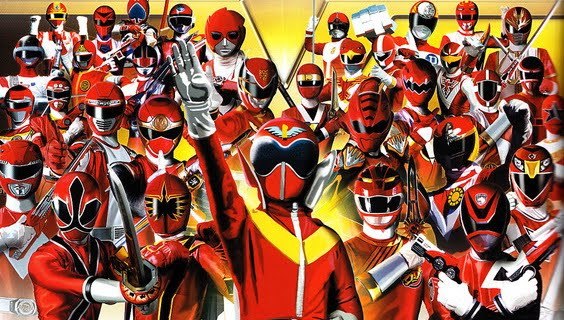 Why… Why is the guy in the middle a Nazi?

You beat me to it.

Get hyped for the Power Rangers Legendary Battle. I wish Kamen Rider was as popular as Power Rangers is in the US then we can get the crossover movies here.

Yeah, it’s a real shame we don’t get Kamen Rider.

I really hope Legendary Battle is being handled better then Super Megaforce, BECAUSE LOL PIRATEZ NO EXPLANAT0NZ L0LZ

I swear, Disney could have done better with the Gokaiger adaptation.

For all those Gokaiger fans: “Hade Ni Ikuze!”

Gokaiger was probably my favourite series.

Choudenshi Sentai Bioman = Power Rangers TTV. Someone please do this.

I already did a few Power Rangers TTV, But I never thought of Bioman for it.

Technically, he’d be a Neo-Nazi. He’s the red ranger for the first Sentai, and was first seen in the mid- 70s. Also, this picture is outdated. No Gokai Red, no Akiba Red, no Red Buster, no Kyoryu Red, and no Tokkyu Ichigo.

@Mactray Get it? BIOman? BIOnicle?

Get it? BIOman? BIOnicle?

Technically, he’d be a Neo-Nazi. He’s the red ranger for the first Sentai, and was first seen in the mid- 70s. Also, this picture is outdated. No Gokai Red, no Akiba Red, no Red Buster, no Kyoryu Red, and no Tokkyu Ichigo.

I found a place with all the new episodes here: https://www.facebook.com/notes/super-sentai-tv/ressha-sentai-toqgersubbed-by-over-time-tv-nihon/629898660380043

I unfortunately find ToQger to be incredibly frustrating to watch. There’s so many interesting story threads like the “Shining”, the memory loss, and anything involving Akira, but it’s always sidelined by endless wackiness and Right chewing the scenery. I really hope it improves, because I love the train motif!

Let’s see if anyone understands XD

Sorry but, I still need to watch Tokkyuger.

I did not know that this thread existed.

I finished Jetman a few days ago, and because I can’t pick what to watch next, I’m watching Kamen Rider Black. Anybody have any recommendations?

Go with the Go-Busters.

Or Ride with Kamen Rider OOO.