Living in the Southern Jungles of Insula Magna, Sylva was born into a poor family in the slums of Jenjenu, where she learned how to sneak quickly around the merchant stalls without being seen, so as to steal food for her family to eat. 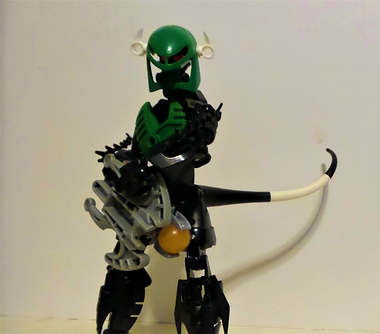 At the age of ten, she was caught attempting to steal from the “elected” lord of the city, who was appointed by Modicius in an attempt to keep the people out of the coalition, in an attempt to steal his money and give it to the poor of Jenjenu. With this, she was thrown into a maximum security prison camp in Phylaca filled with convicts up to five times her age. 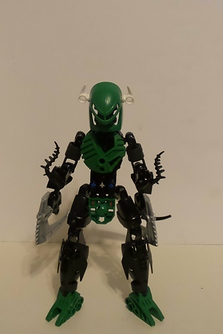 Here, she was treated just as poorly as the other prisoners, and she learned how to sneak so that she couldn’t be found for days. And met someone in the camp that went by the name of Fuga-re, who showed her not only the way of the bow, but he helped her devise a plan to escape the prison, and get revenge on the Lord that threw her in the prison. 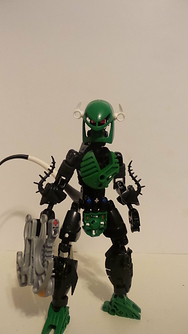 After hiding for several days,she managed to successfully escape the prison by initiating a massive riot in the camp, and walking straight through the front door. After escaping, she began to train eventually fight the lord. By the age of 25, she became so skilled at her craft, that she began to hire her blade and bow out to any with pockets deep enough to help fund her trip back to Jenjenu. 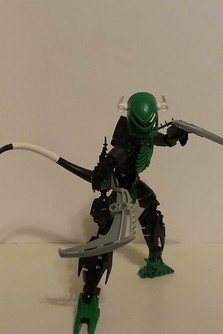 After an additional three years of this, she finally had the funds necessary to complete her task. When she returned to Jenjenu however, she found that the slums, and everyone that had lived in them, had been completely destroyed, in a move to quell the rebellions after Sylva’s arrest. Heartbroken and enraged by this, she vowed to not only destroy the Lord, but everything he stood for, and after a year of planning, she successfully slipped through his castle up to his office, and executed him, but not before getting the name of the man who appointed him, Modicius. 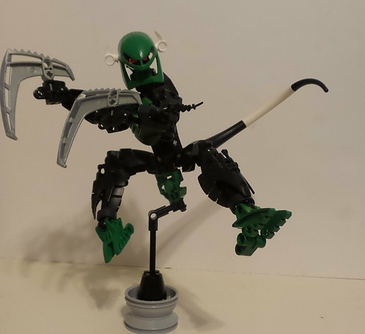 She then vowed to end the reign of Modicius, and after hearing of a Team of toa who conspired to bring down Modicius, she traveled their headquarters in old Serus, and asked to join their cause, where she became a honorary toa of air due to her acrobatic nature. After two years of planning, the team eventually stormed Modicius’ bastion, and successfully defeated him, saving the people of Insula Magna, before the team dismantled, leaving Sylva to continue her life as a weapon for hire.

I know this moc is not the most intricate or complex I mean, the torso is a modified metru torso, but I believe that it still looks good for what it is. As for the reason behind it, I got bored one night, and this was born. I also have realized my camera quality may be getting worse some how, so please leave any suggestions in regards to that. The white bit on the tail was initially born out a lack of pieces, but then I developed a reason, being that it is similar to lizards with white stripes on their tails, and this being no different.

Thanks for reading, and as usual, please leave any comments or suggestions below, and I’ll be sure to address them.

I love the unique monkey look she’s got goin on. Could add more white

Interesting MOC, the Torso seems pretty solid, but the legs seem a bit weird. Overall I really like the look of this.

@ThatchMac Is there anything I could do to them? They’re pretty simple for now, as I mainly wanted to get the initial design out.

It’s hard to say specifics, but I’d defiantly get rid of the Ben 10 pieces as upper legs. They really don’t work.