Well, sort of. Consider this guy a V0.9. His overall look is completed, but some parts need to be swapped for different colors and sizes and stuff like that. I need a different chest plate, some black axles, and some more trans-light blue pieces, along with some lift arms in better colors. His story also isn’t completely fleshed out yet aside from his partnership with another Bounty Hunter MOC I have, so there will probably be some odd parts of it.

Syras is a bounty hunter who constantly travels the world in search of his next target. He never wanted to be a bounty hunter, to fall into alignment with thieves and murderers, but a need for camaraderie inside him drove Syras to join a band of enigmatic hunters known as the Sheeth. He found himself often paired with a lone-wolf warrior named Auria, an expert with her hunting rifle. As the two worked together on various missions, Syras grew to respect her and her talent. However, he still longed for a day when he might become something greater than what he was, but he always remained with his fellow hunters.

He is a master of tactical defensive combat, going into battle armed only with a large shield and steel knuckles for some limited offensive capability. Few have ever managed to breach his defenses. Those who did weren’t around much longer to tell the tale. He wears a specially fashioned mask that was designed to look like a Bohrok’s Krana to intimidate his opponents. Often the mere sight of it in the dark is enough to send targets running for their lives. 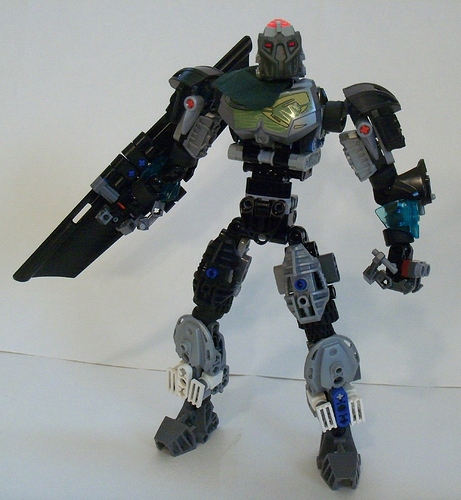 Here he is preparing for a fight! 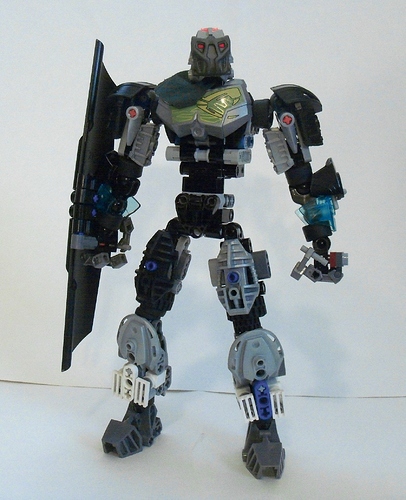 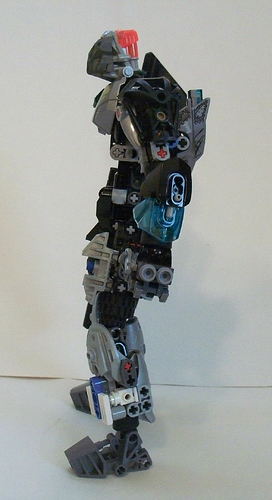 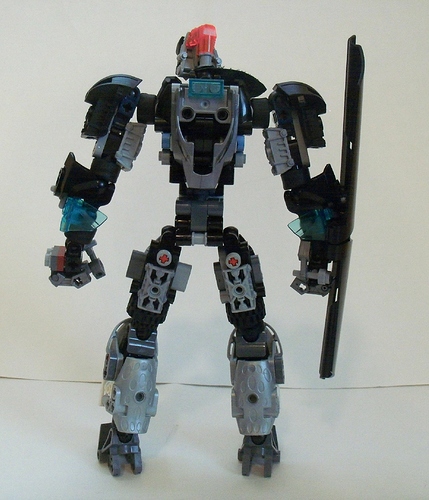 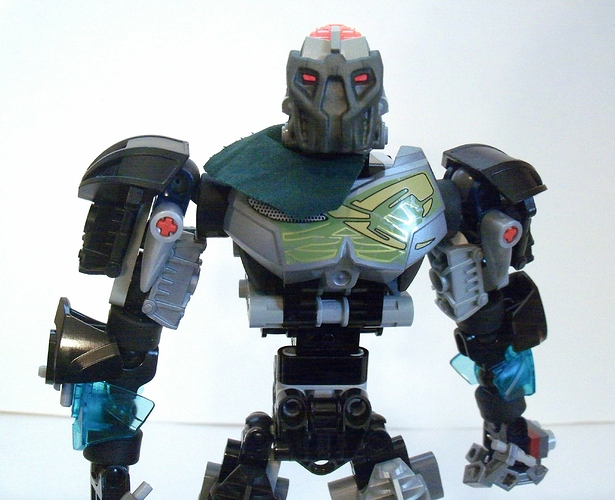 Close up of the head and chest area. I enjoyed using the minifigure cape as a sort of bandanna, and the use of the Super Chest piece. 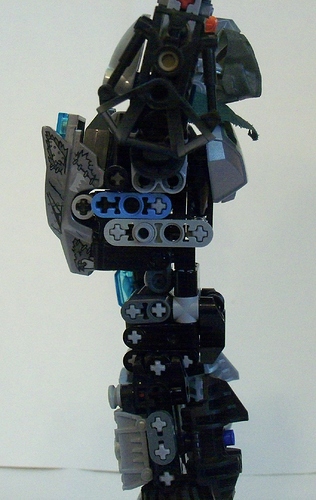 A look at the new torso build. Credit for pieces goes to a friend of mine. Without him I would have been out of parts this time last year! I enjoyed building it, and I think it looks pretty good, except for all the lift arms seen here! 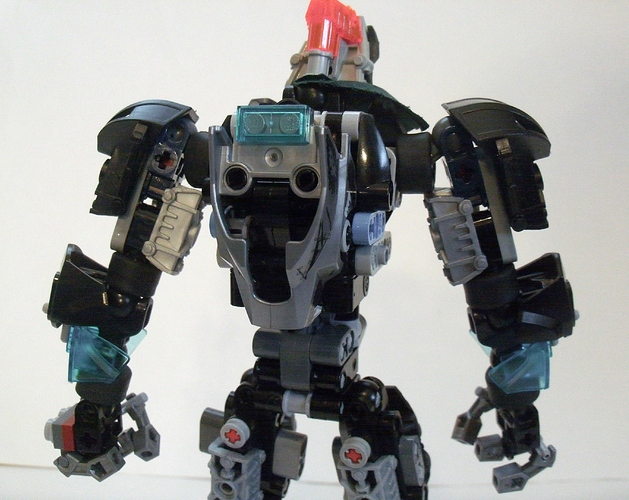 Also, wolf Chima speeder piece as back armor! Loved utilizing that, I think it looks really cool there! 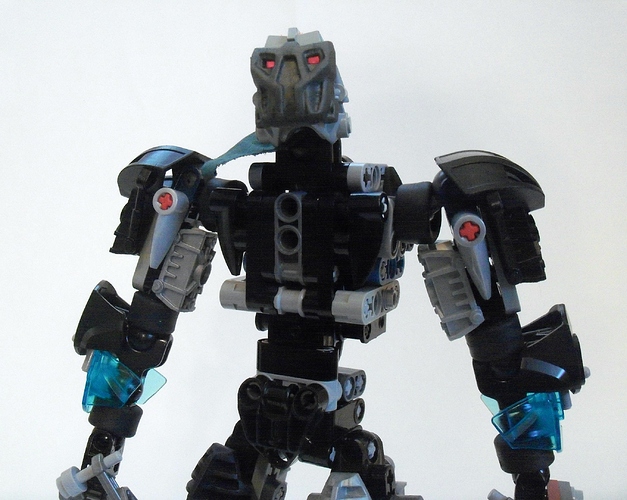 Inside look of the torso. 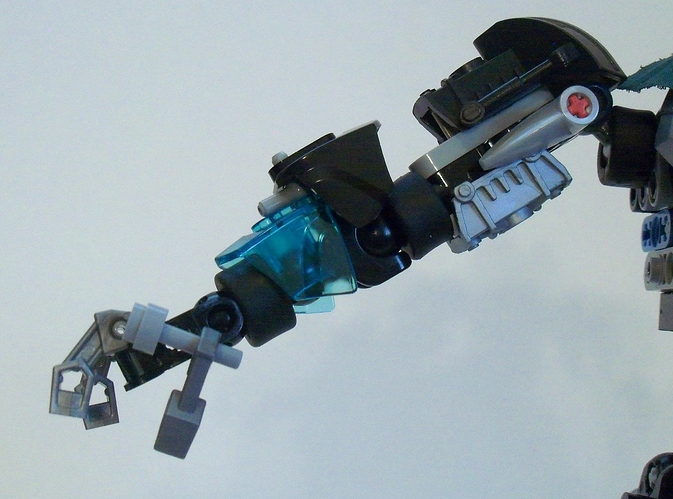 Arms are really simple, you could probably build them from this. Don’t need much explaining. 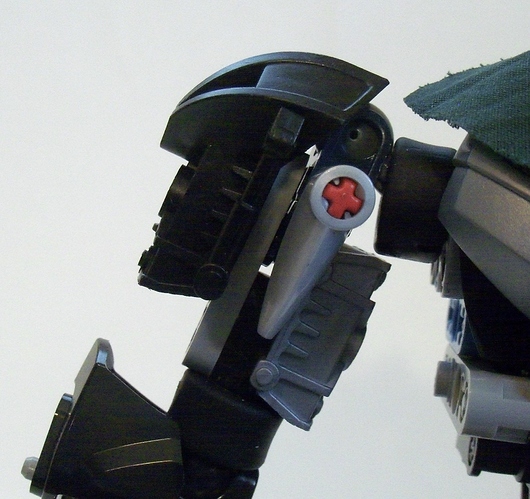 The Metru leg armor piece fits nicely into the space left by the tire. 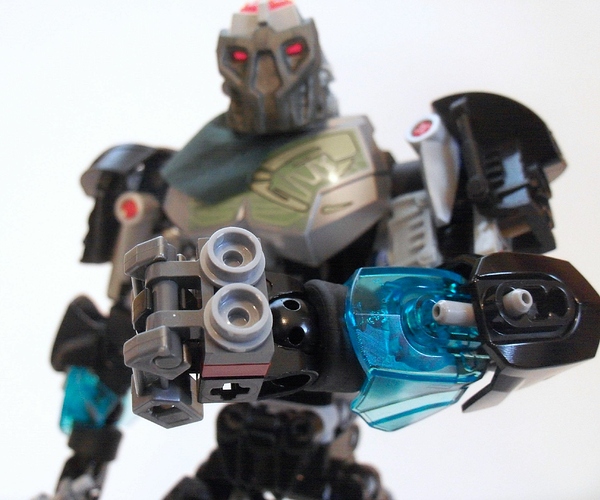 His left hand has the steel knuckles! 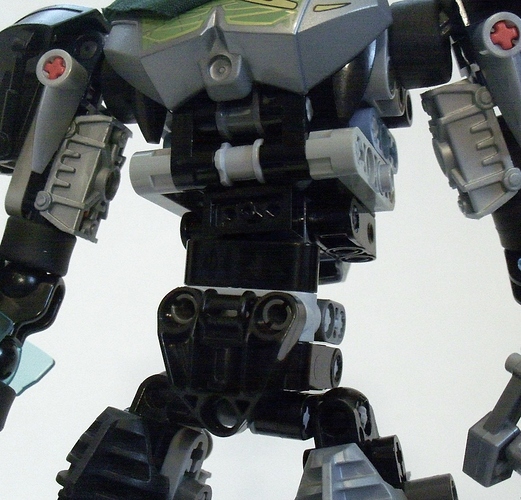 A close look at the waist. It was a hassle making the hip ball joints stay in place! Also, those 1x2 plates fall off…a lot. 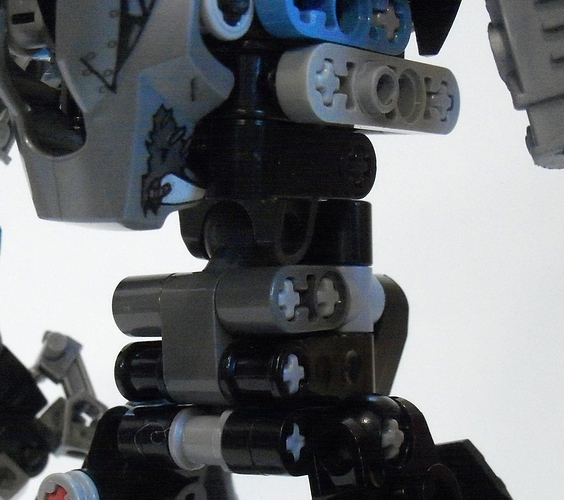 Back of the waist. 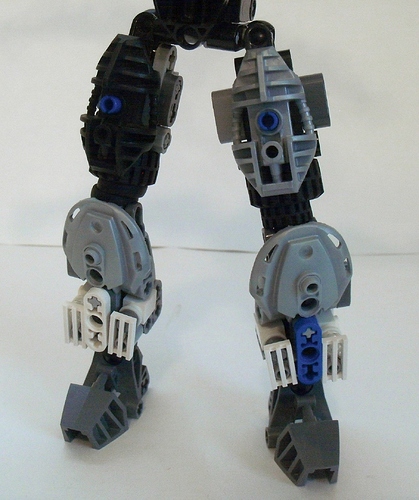 Legs. Also pretty simple. The better leg is his right leg, with the black armor. I need to change some colors on him and get two 1x2 lift arms for his left leg. Also, anything look familiar? 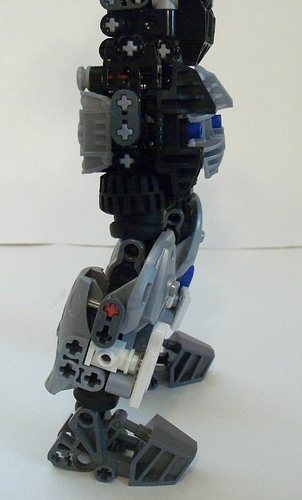 Side view of the legs. If you guessed that his lower legs are Endymion’s arms, you are correct! Have a cookie

! Yea, I took Endymion’s WIP apart…I needed a lower leg design and after thinking about it I thought that his arms would work better as legs, so I butchered him. Fear not though, he will be made eventually! 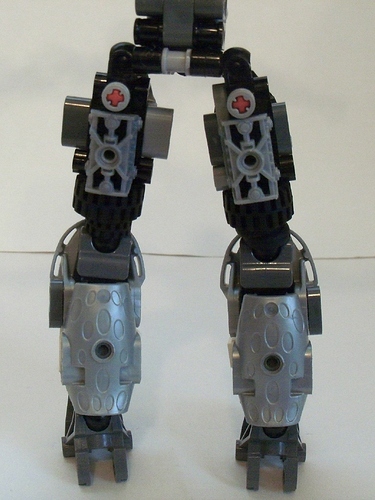 Back of the legs, probably the best looking of all my MOCs. 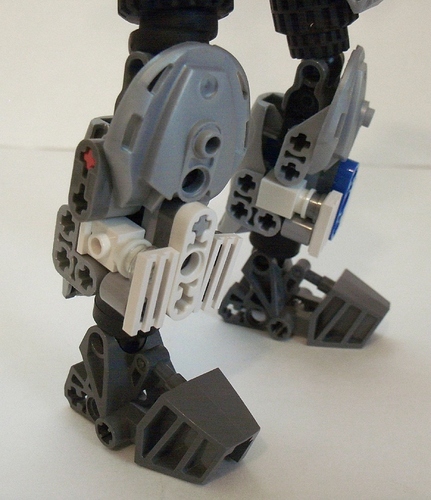 Another look at those Frankenstein’d lower legs! His feet need to be black too. 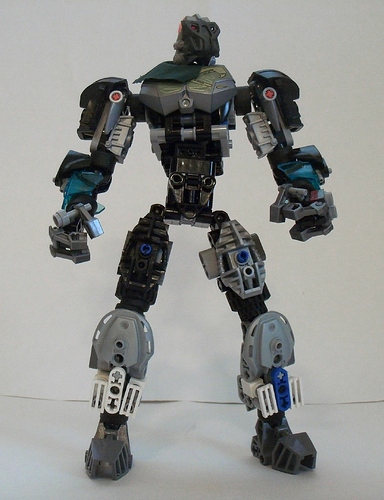 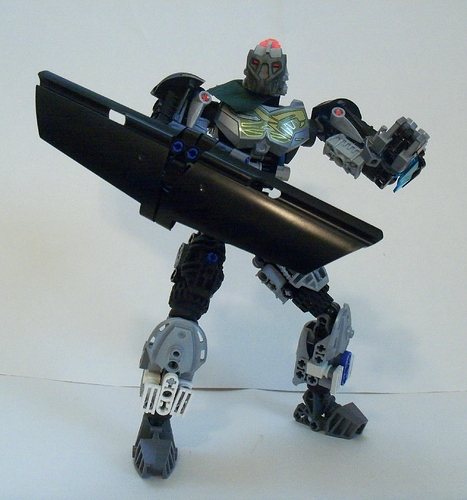 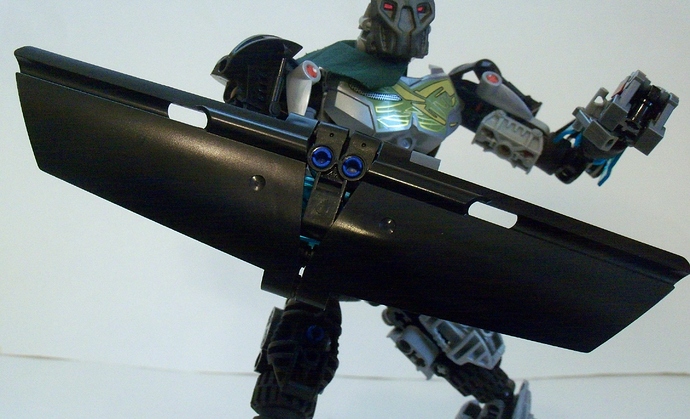 Close look at the shield. I managed to bridge the gap, but it stresses the pieces a little! 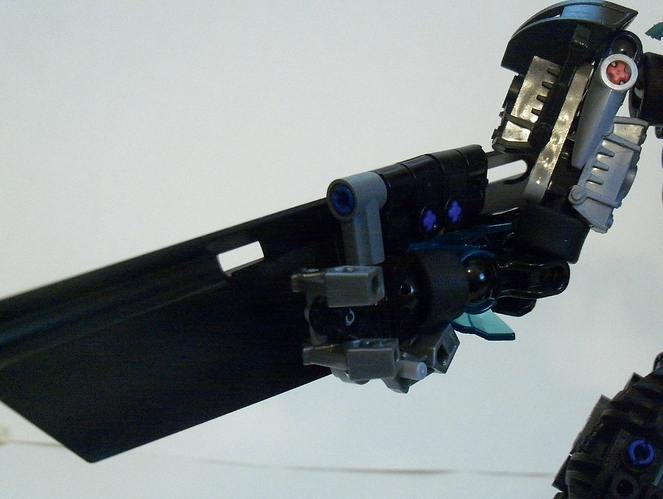 He holds it like this. Just like Ghar his thumb can go below his hand so he can both hold his weapon and have a full hand. 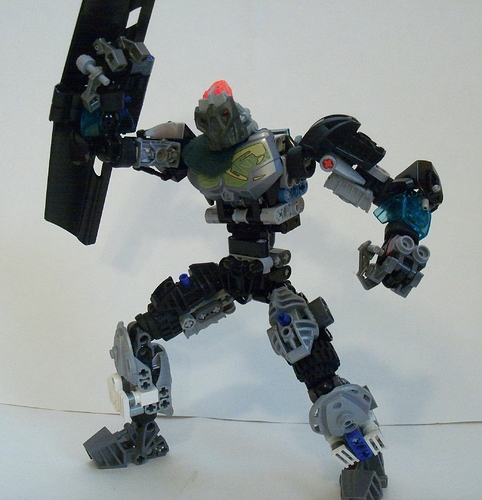 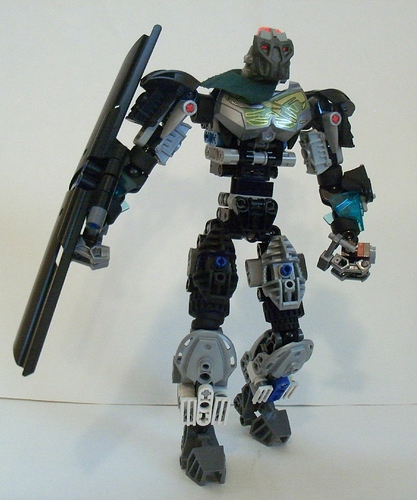 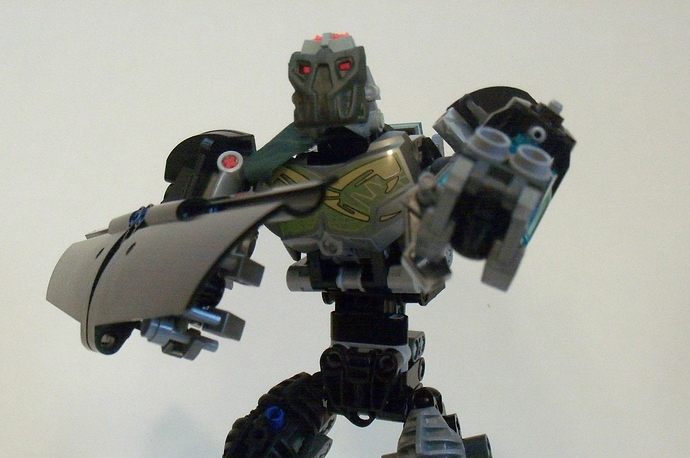 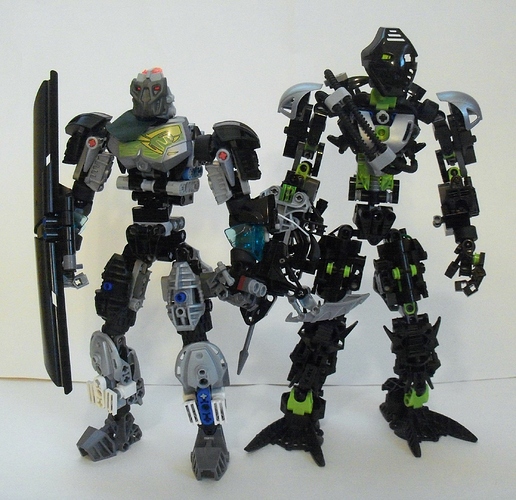 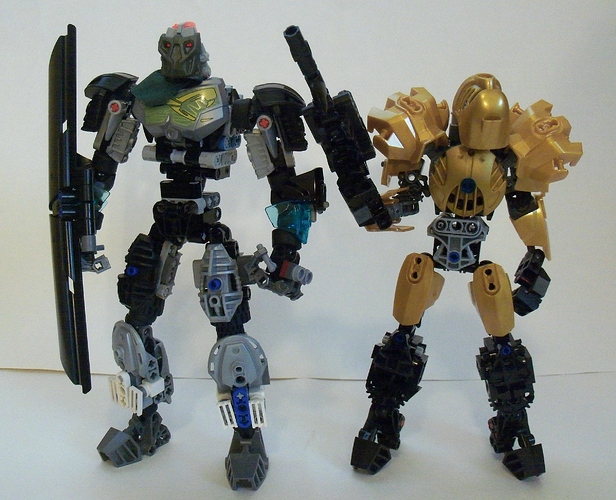 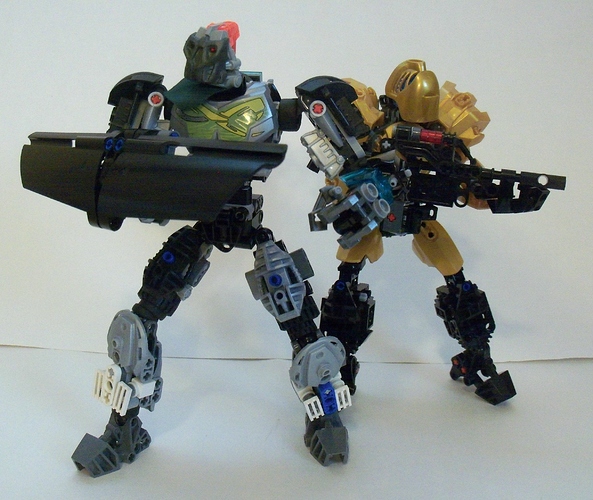 Well that’s about it! I’ll upload him again when he becomes his official V1! Sorry this was a long post, but this is a new MOC and I haven’t had one for a while! Thanks to anyone who read any of that!

Also, I’ve been considering making him my secondary Self-MOC. Let me know what you all think!

I have something else coming up MOC related, but it isn’t mine! It’s a showcase of someone else’s MOCthat I think will be awesome! Look forward to that!

These are great. Today has just had a ton of MOC i loved.
Here’s my GIF to you.

This MOC looks fantastic, simply put, it just does so many things right.

that’s a great use of a krana

Really Love how you used the shield.

I think you should distribute more green so the chest plate doesn’t look out of place, but other than that, it great!

Nice! I like the creative utilisation of some pieces. But the color asymetry bothers me in some places.

Other than the fact that it needs a bit more green like the one in the chest piece, this Moc is a masterpiece.
I love the shield, it’s a “weapon” you don’t often see alone, so that’s a plus.

Btw… Why can’t I give this more than one like?

Thanks, man! Love the GIF, by the way!

his MOC looks fantastic, simply put, it just does so many things right.

that’s a great use of a krana

Glad you like it! You don’t see the Krana utilized very much, in fact the only other MOC I can remember seeing it on was a Dark Hunter MOC from the original line!

I’m probably wrong on that, but I personally haven’t seen many and I like how they look!

Really Love how you used the shield.

I love the shield, it’s a “weapon” you don’t often see alone, so that’s a plus.

Thanks, both of you! I found the Technic panels and just thought to make a shield, but I got tired of bladed weapons so I decided to make him full-on Captain America and just have the shield and the steel knuckles.

The chestplate is a placeholder. I need to buy a silver one with blue detailing since his color scheme is black, silver, and blue!

But the color asymetry bothers me in some places.

He’s only a V0.9. The colors aren’t intentional, and they will be changed eventually!

Wow, this guy was a surprise. He looks good. I think his arms/shoulders are a bit too wide, and his torso is too techinc compared to his awesome Lewa chestplate though. That Krana is very nice, plus his overall story and theme

Yea, I need to get some System tiles and slopes to smooth out the torso a bit, but there’s nothing I can do about the shoulders without making them awkward!