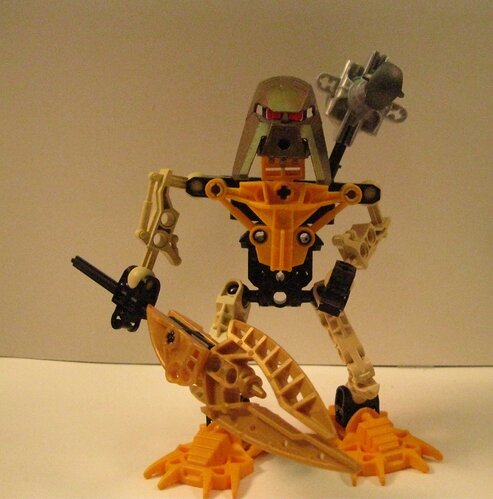 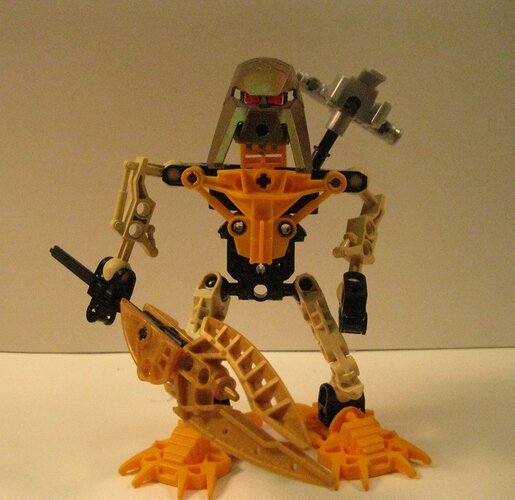 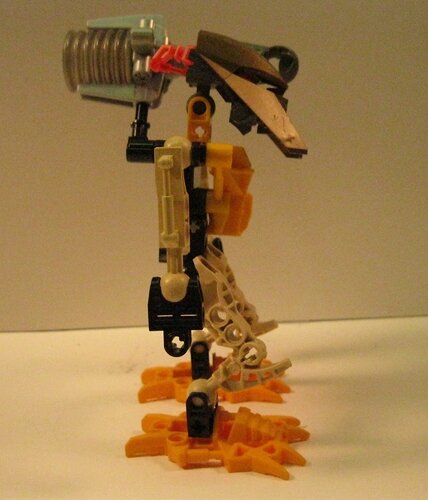 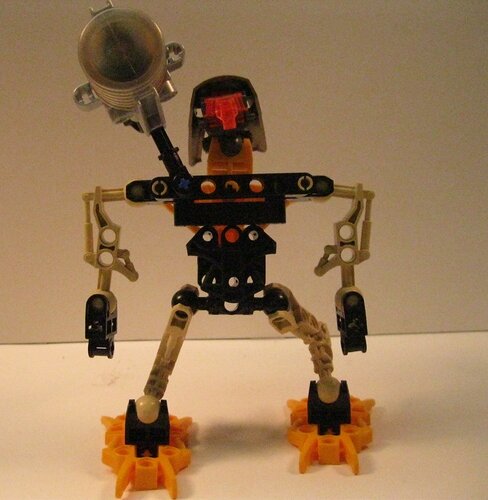 He has a high level of skill at building machines and tools/weapons, while nowhere near that of such as a Nynrah Ghost or Vortixx, he is still much better than that of the average Matoran.

Personality: Ibriki is quite gruff for a Matoran, a loner by nature, or just one who doesn’t enjoy socialization with most individuals. In truth he cared little for the other Matoran of Mahri-Nui. While he understood the benefits of having them alive, he remained on quite an impersonal stance to many of them, just playing his part to attempt to ensure his chances of survival would be as high as he could make them.

He’s quite decisive, rarely acting without some form of thought and planning. One who observes and try’s to figure out which path to take for the best outcome.

Along with this he’s quite a bit of a work-a-holic, one who can get invested into a project to such a depth that they may forget to take care of themselves.

Background: Ibriki was originally from Mahri-Nui, but he didn’t stay there long. While he did remain for a good number of years past the Cataclysm he was removed from their ‘island’ in a fairly quick manner. Being swept off the island after nearly being killed during a Barraki attack.

While he had expected to die he was surprised to find himself alive and well once he awoke, resting in an underwater cave and surrounded by a large, obviously artificial air bubble. It was an even bigger surprise when he found out who it was that saved him.

While at first believing his savoir to be a Barraki captor (which was at least fairly close on the captor part). He quickly learned that she was actually a Toa, another mutated denizen of the now destroyed prison of course, but still safer than that of a Barraki. Especially when considering the damage to her original limbs and once he began to learn some of her past and witnessed her quite obsessive protectiveness of him, eventually leading to what was basically a permanent stay in her cavern.

While he wasn’t exactly that disturbed by the development, Rakya, his ‘Toa savior’, being more than willing to ensure he remained healthy, alive, and generally happy, ensuring his air bubble remained full and even going out of her way to gather materials from the remnants of the pit for him to work and build with, he was still highly wary of her and her story and thus planned out possible ways to escape, even going so far as to build a breathing device for her, using the distraction to also build his current scrap spear to kill her with if he chose to.
He chose to continue trusting her, seeing her as the better choice for survival.

He remained with her for numerous years before Mahri-Nui’s rejoining. During that time Ibriki had been attempting to create a working breathing apparatus for Rakya, the amount of effort needed was luckily lessened once it was discovered Rakya was partially amphibious from her mutations, and even managed to build the replacements/repairs for her limbs.

Following the rejoining the two found themselves dragged into Karda-Nui from the sudden seismic shifting, Rakya’s ‘home’ having been built into a crevice of sorts between the fallen island and its pillar.

Ibriki was lucky to avoid being mutated by the swamps of Karda-Nui, while Rakya’s own mutations were far enough progressed to render her immune.

Upon their arrival the two quickly took to learning as much of their new location, and the dangers it carried as they could. Ibriki even managed to get his hands on a damaged ghost blaster they found while travelling, even repairing it to fully working order later.

Currently he is more than ‘happy’ to live with Rakya, curious to learn more of her hidden story, such as her real name due to the suspicious fact that it literally translates to murder (gotta love the Matoran dictionary) and his realization of the usefulness of having what amounts to his own personal Toa, even despite her weakened attributes and… 'quirks’. He’s even having taken a bit of a liking to her, making her one of the few he didn’t mind interacting with. 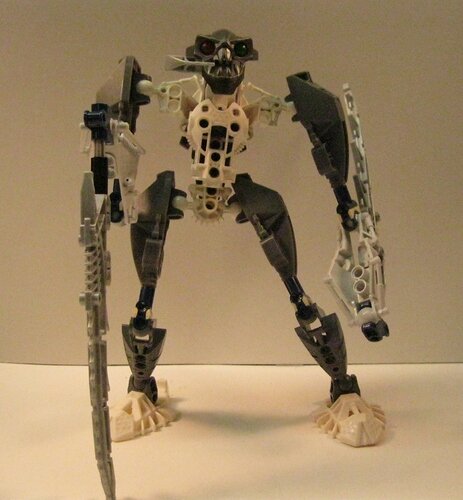 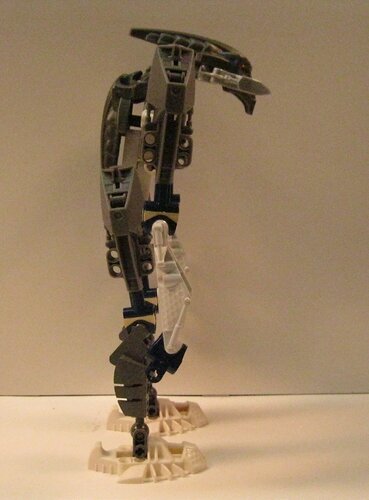 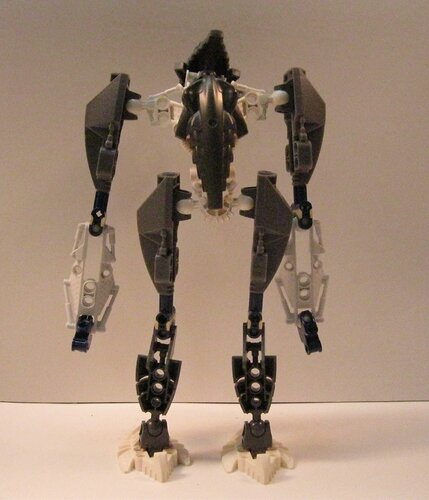 Weapon/s: Rakya wields a pair of twin blades, both recovered from the destruction of the Pit.

Other than that she no longer has access to her Kanohi power, the mutations having rendered it powerless, but she does retain some access to her elemental power. While it is no longer at the strength it originally was she can easily channel it through both her weapons and body to a reasonably high level. Her natural resistance having remained intact enough to allow her the ability.

Abilities: Rakya has above average night vision, can breath underwater, has slightly higher than average strength due to her 'upgrades’, and can cause her spine/back to glow at will.

Unfortunately she’s greatly debilitated by her infected eye, having damaged it in a fight against one of the Barraki, losing one of her mandibles/fangs, and leaving her with a permanently blurred and faded view on her left side. 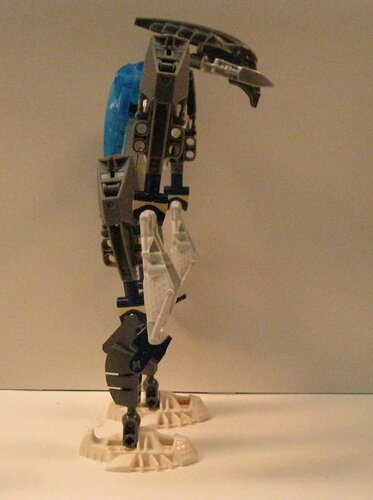 Personality: Rakya is… twitchy. While usually an unbelievably friendly individual, acting especially affectionate to Matoran, she can be set off certain conditions, such as seeing a Matoran be harmed or witnessing a Toa/similar protector not 'caring enough for their Matoran’, suddenly switching to a crazed individual willing to slaughter whatever set her off while also attempting to keep Matoran 'safe’ ,even to the level of possible danger to themselves.

Otherwise she’s a nice enough individual, friendly, if to a sometimes creepy level, inquisitive, slightly distractible, and a bit twitchy, usually shown by at times bursting into chittering giggles.

Background: Rakya, originally known as Idris, was the single Toa protector of the village of a Makuta assigned island.
Since her beginnings she has always carried a love for Matoran, coddling and interacting with them at every chance she could get, nearly treating them as beings more precious to herself than Mata-Nui himself. Which was why it was such a surprise when she appeared to have slaughtered her entire island.

While the full story is unknown to all but Idris, who later renamed herself Rakya after her sentencing to the pit, it has since been assumed, after the Makuta’s betrayal, that the original idea, her just snapping and slaughtering everything, was incorrect (the shakiness surrounding it since its consideration helping), most likely having instead involving all of the Matoran being killed in quick succession, most likely the Makuta, causing her to snap and kill it along with basically glassing the entire island, if the charred husk of armor she was attacking before being recovered was truly the yet to be found Makuta, and her rantings about her 'precious things’ being killed meant anything.

In truth her imprisonment to the Pit was less due to the assumption of her killing the Matoran than it was to both contain her, and keep it a secret from the Matoran that a Toa could do such, or at least be driven to such levels of insanity as her.
During said imprisonment Rakya was involved in multiple escape attempts, both in escape of the prison and just containment to attempt attacks on individuals known for harming Matoran, leading to heavy and lasting damage across her form, mainly centered across her limbs, and increases on her security and quality of treatment.

After the original Pit collapse Rakya, despite the sudden mutations, quickly took advantage of the situation to attack those she had been stopped from doing such to before, scavenging a twin pair of blades and hunting them down while she could, eventually leading to a brawl between one of the Barraki, which resulted in the of her left mandible/fang and lasting damage to her left eye, leading to the later, visible infection she currently suffers from.

Afterwards she took to wandering the remnants, eventually learning of the fallen Mahri-Nui, while she would’ve attempted to enter she quickly learned of the poisonous atmosphere, and the Matoran’s wariness of Barraki-esque beings just as fast.
Instead she took to helping them as she could, attempting to thwart Barraki attacks, become prepared to recover fallen Matoran should such happen, and leave potentially helpful objects for them to find, keeping herself just an unknown helper all the while.

This eventually lead to her encountering Ibriki after his fall, and her subsequent obsession with keeping him afterwards. And, to put it simply she was beyond overjoyed when he seemed to not mind her plan, and even offered to help repair her.
This, when combined with his additional confirmation that he preferred staying with her and gift of an internal breathing upgrade, she is quite literally willing to do near-anything for him and to keep him safe, even going so far as to sacrifice her own life on the latter. 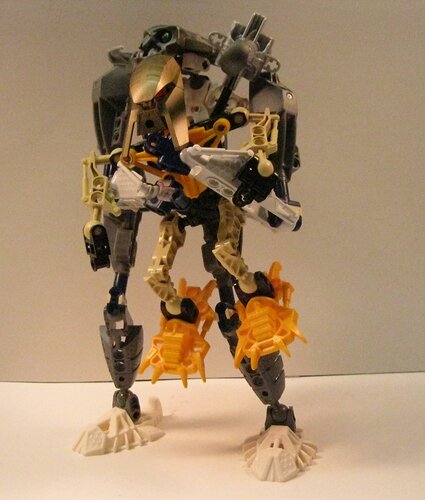 Ibriki - “So, I take it you won’t be letting me down anytime soon then?”

Ibriki is good, but the color is not as good. Rakya… Kinda weird, good color though

Eh, didn’t really have any other pieces that could work, and keep the color scheme at least somewhat stable. At least the collars I did use fall into the earth element alignmnet.

It seems like most of your mocs are tablescraps, not saying that they look bad, just that you seem to label most of them as tablescraps. I kinda like Ibriki, shame the feet aren’t the same color as the jest piece though.

Eh, I tend to consider mocs that are unplanned (i.e. just random/bored builds) tablescrap mocs due to their relatively ‘scrappy’ designs, small sizes, and relative simplicity to my more planned mocs (such as Tekan for one).

But… they’re both keetongu orange…
Glad to hear you like him though! He was my attempt at creating a Mahri-toran build while not having the proper pieces. Possibly also a more ‘surface-esque’ look too.

Ok, I thought the feet were just normal orange.

Ah, understandable. Didn’t have the best photo setup when I took 'em.

Wow I’ve never really seen Pohatu’s propeller arms used like this. Rakya would be a great moc if further developed with improved girth and proportions.

Hehe, ja, it was a surprising build even to myself. Glad to hear you like her. I’ll have to see if I can think up anyways to upgrade her then.

These two were originally designed for the same contest as Itek and the Ga-beetle (at least before I settled on Itek, and it later went down). Surprising as it may sound, I actually made them for the 2008 category, meaning they had to use pieces specifically included in that line (color not limited), hence propeller limbs (due to a lack of other pieces), and the crazy Mahri-toran build. (Unfortuantely these two were also the only ones to have a piece not from their chosen line. I.e. Ibriki’s mask.)