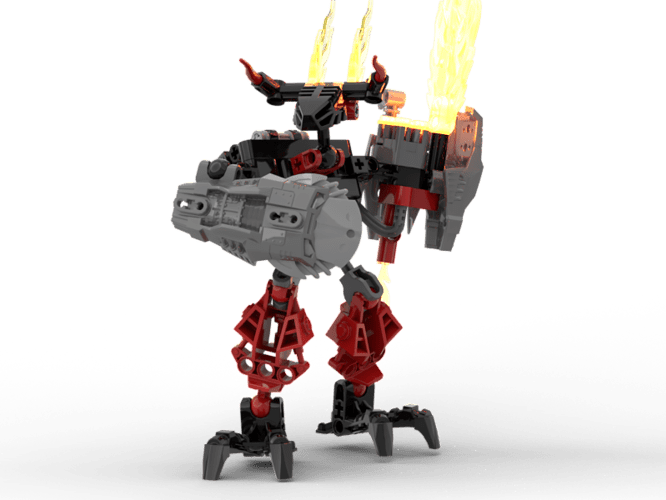 Tahtaurax800×600 276 KB
I made this a while ago in addition to other models that are similar trying to create a “wave of canister villains”. This is the fire villain Tahtaurax. Like the other build’s it is a robot that harnesses one of the six primary elements. 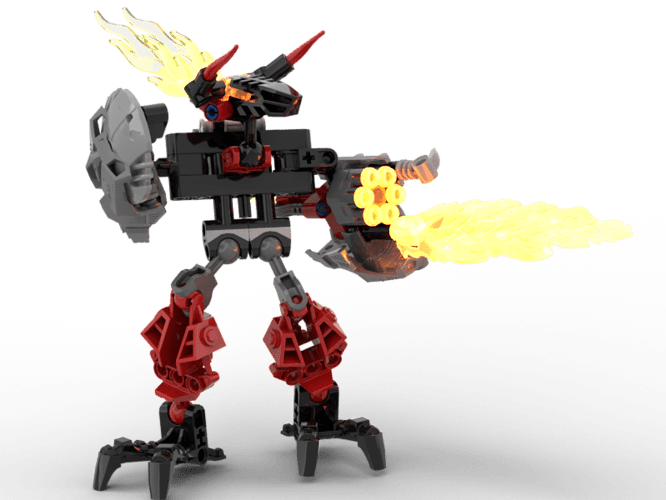 The idea is cool, but the execution could use some work.
Being in LDD, there are plenty of limitations of normal Lego that are able to be bypassed, such as colors and stability. You haven’t really taken advantage of this.
Also, the moc is very squarish, especially in the torso area. It’s too two-dimensional and there’s not anything interesting besides the basic skeleton. Also, the way you attached the legs bothers me, it limits articulation and ends up making most poses feel awkward since it’s not really how humanoid hips are designed.

I am trying to make this buildable so why would I cheat the system? Also I am using Stud.io. This was a part of a series of clone “sets” that used the same torso. Its supposed to have a low parts count which only allows for such a simplistic design.

LDD, Studio, it still applies.
You can create a complex design with a small parts count, by the way, it just takes work.

This is supposed to be a simplistic design my dude. When was a canister set that complex?

This is supposed to be a simplistic design my dude

With all due respect, that’s a lousy defense.

While the legs and overall construction is definitely simple, the torso is also made mostly out of atypical pieces which you wouldn’t normally find in a torso design. The combination of pieces in the arms and torso doesn’t seem like intended simplicity, but unusual construction in order to evoke a specific feel to the overall model.

The quality of the end result is… Debatable. The color blocking is well done, but the torso design limits the leg and left arm movement and looks unnatural, like an upright pancake. The arm designs could have been accomplished in more efficient and simpler ways, but the left arm design limits movement and just looks bizarre. I’d comment more on the right one but I can’t actually see nearly anything past the front.

Claiming the intent of the simplicity as a retort to critique (and on top of that attributing the design to the same level of a canister set) doesn’t look like you designed it simple on purpose, it makes you look bad at accepting critique.

The right arm is supposed to have limited movement due to being a shield. I don’t have a problem with critique. This and the other ones are literally supposed to be as simple as possible while having some custom feel to it (in the torso in this case) but whatever think what you want. This is an extremely old moc as well so I don’t even have the stud.io file anymore.

It may be simple, but sometimes simple just doesn’t get across what you want to.
For a moc of this size and the way it’s designed, I think making a more complex design would benefit in the overall look.
Simpler mocs are usually better when they’re smaller or have less need to be a certain size/shape.

The right arm is supposed to have limited movement due to being a shield.

Funny, I said the left one. From what I can tell, the right one is fine.

For a moc of this size and the way it’s designed, I think making a more complex design would benefit in the overall look.

I actually really like the blending of the CCBS and Technic pieces here. Plus, the lighting of the weapons and the head are stellar.