I originally built this MOC for the now cancelled Arena of Champions contest thing back in January. I lacked parts (as always) and was thus forced to heavily rely on standard limb pieces and even an Inika torso, but could still customize some stuff.
My personal favorite thing here is his helmet - those slits at the sides of the Kakama just make for a perfect visor.
As to the backstory … it’s not too long I hope. But this for once is a character that actually survives 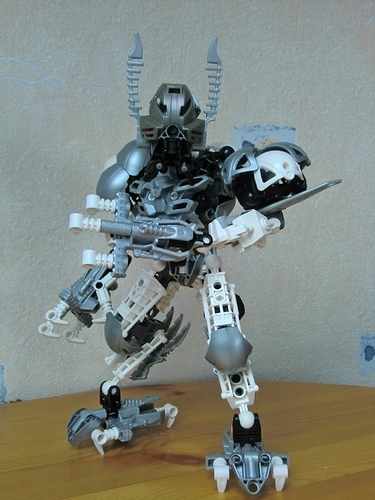 Tazul originally was an inhabitant of a small island in the Matoran Universe. He was known for his violent and aggressive behavior and many of his tribe feared him. On one day, Tazul got into a rather heated argument with one of the tribe’s elders and eventually killed him in his rage. Knowing that he now had committed a crime, that wasn’t easily forgiven and that many were just looking for a way to get rid of him, Tazul stole a boat and set off to find himself a new home.

It wasn’t long though, until he met a ship bound for Stelt. The Vortixx who commanded it, saw a valuable slave in the heavily built Tazul, overwhelmed him, and took him with them. On Stelt, Tazul soon was sold to a member of the ruling caste named Dornak, as a gladiator. Dornak told Tazul, that all he had to do was kill every opponent sent against him in the arena and he would never lack anything he needed. 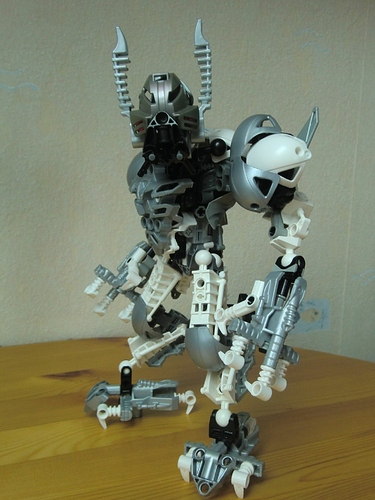 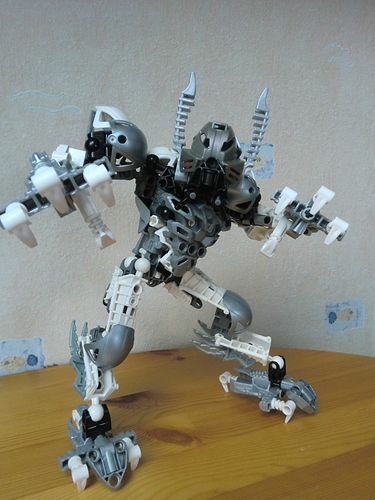 For several years he was trained by various gladiators that also were slaves of Dornak. It soon became clear, that Tazul was no good with any kind of weapon that needed a certain skill to wield, as he usally just fought by reflex and with his sheer strength, that few could match.
In the end Dornak just gave Tazul a simple suit of armor and sent him into the arena for his first time. But even though he was ill equipped and just used his natural weapons, Tazul’s savage fighting style proofed the superior for one arena battle after the other, making Dornak ever richer through the bets on him. And Tazul enjoyed his new “work” quiet much, too.

It worked well for many years, but eventually Tazul was set against a gladiator, that proved his superior. His poor armoring ripped to shreds, he was carried out of the arena more dead than alive and dumped in some alleyway, to die, on Dornak‘s order. It wasn‘t worth the risk for his master, to care for a mere slave, that might never be able to set foot into the arena again, even if he survived. 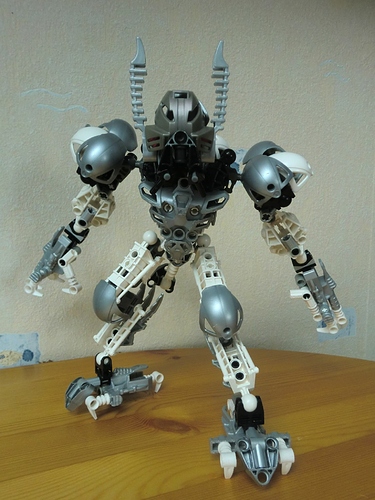 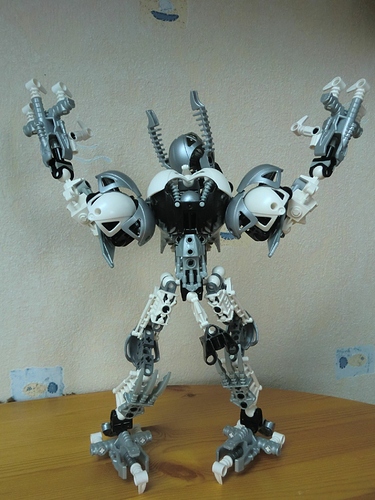 It was a Ko-Matoran named Puc, who saved Tazul. Even though he had never seen Tazul in the arena, he recognised a gladiator in him, cared for his wounds and finally madehim an offer: He would restore him to good health and after that Tazul would work as a guard for his shop, which he plannend to expand. But Tazul refused. He said, that he was done with serving someone, who just saw an investment in him. If the Ko-Matoran helped him, until he was strong enough, to pay Dornak a visit, though, he would see to it, that he would get rewarded. Puc thought on this for a while, but finally accepted, because he felt, that this fallen gladiator might become great again.

Time passed. Tazul‘s wounds healed and he began filling his time with training in Puc‘s backyard. Against his former refusal, he started working for Puc, mostly guarding the Matoran‘s shipments to other islands, where Tazul could hone his skills in fights against Skakdi pirates, Dark Hunters and dangerous Rahi.

After more than a century, he finally showed up once again in Dornak‘s barracks. A few of the gladiators – those that survived the years – recognised him. Dornak did, too. He began talking about how glad he was, that Tazul wasn‘t dead and that he finally found his way home, but Tazul cut him off. He was here to take revenge for the treatment he got after he was defeated. A few of the newer gladiators tried to stop him on Dornak‘s order, but he killed the bunch of them without much difficulty. Tazul seized Dornak, ripped open his chest with his claws, and tossed him over the wall surrounding the barracks, into the alley behind it. Dornak was dead, even before he hit the ground.
Tazul declared to the remaining gladiators, that he now would take Dornak‘s place and that they were now his subjects. None dared refuse him. 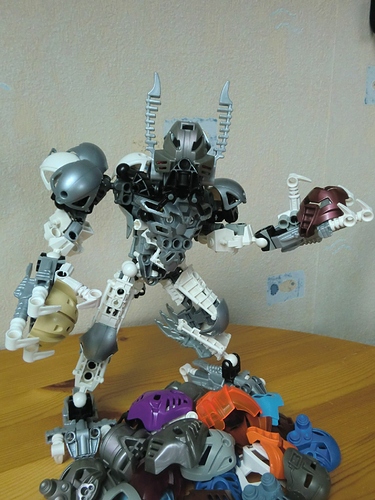 As Tazul promised, he rewarded Puc by making him his steward, as he himself didn‘t want to care about all the stuff, that came with his new position. It was a good decision. Puc immediately saw how much profit he could make and that he was in theory elevated to the ruler caste by Tazul. Of course a Matoran couldn‘t be officialy a ruler, nor could a former slave and gladiator, so Puc installed a non too brilliant member of Dornak‘s species as a figurehead and pulled the strings of his growing influence in the back.

Tazul himself just wished to train and fight, so he kept doing that. With all of Dornak‘s wealth now his, he spent a large sum on an armor forged by a Nynrah ghost specificly for him. In the arena, he found it quiet to his liking, to collect the masks of his beaten opponents, earning him the nickname “Keeper“ combined with his now more passive fighting style, where he let his oponnents come to him.

Tazul enjoyed his new life quite much, until Teridax took over the Matoran Universe and eventually was killed by Mata Nui. Like all the population of the Matoran Universe, Tazul also had to leave the Great Spirit robot, finding himself stranded on Spherus Magna.
When he heard storys of the Glatorians and the Arena Magna in the city of Atero, he traveled there with Puc, discussing with him the possibility of future gladiator fights there.

I really like the claws. This MoC reminds of the ones being made just after the Inika came out.

This MoC reminds of the ones being made just after the Inika came out.

Ahhh, those were the days… before…

THE ATTACK OF THE CLONES…

Those rare Masks, tho.

Pretty neat. I wish I could have made something for this RP.

Awesome usage of Zamor Launchers! I like the muted color scheme, too. My only criticisms would be that the Gunmetal Kakama (while awesome) kinda breaks up the color scheme, and that his shoulders look a little… blobby due to the placement of the Nuva armor. However, this is a pretty cool MOC. I love the feet especially.

Surely I’m allowed to brag a little once in a while?

Now that I think of it - I forgot to put my golden Mata masks on that pile.

Fun fact: These are just masks in 2001 shape and all of them have either a different shape or a different colour. And I just added the masks to that pile that weren’t in use elsewhere.

The idea for Zamor launchers as hands/feet I actually had quite some time before this MOC. I used it for the first time on my Dermis Dragon MOC (also on the message boards).

The Nuva armor at the shoulders is supposed to look … big. Think of it as big shoulder armor like that worn by some of the more unrealistic Video Game Characters

Also it’s interesting how many people think the old gold and silver masks don’t fit into the newer colours - it doesn’t bother me personaly at all for some reason.

This is pretty cool, I really like the design and overall appearance of the legs and torso.

Those claws are ingenious

The MOC looks really good, but the amount of nuva armour especially in the shoulder area seems a tad excessive.

That being said, I really like the leg design.

If it weren’t for the thornax launcher bits and the Nuparu claws, I would’ve thought that it belonged in the guide to the Dark Hunters. I love it. It appeals to me.

This is really awesome! My favorite things about it:

I personally would have gone with a different head/mask to match the wild and ferocious look of the rest of him. But that’s about all I can even say negatively about this one.

the hands are quite ingenues

I figured the Zamor sphere launchers had to be good for something. But it isn’t the first time I’ve used them as claws - like I said I already used them for the feet of my Dermis Dragon MOC.

As to the head - it’s supposed to be a helmet, no mask.

I got to say this looks very great.
The build especially.