So, I’m thinking of doing a weekly update where I focus on the builds and/or writing that I’ve put into a team of characters in my “Project : Ignition” stop motion project about the Voya Nui plot.

We’ll start with the Islanders of Doom themselves, the Voya Nui Resistance Team. Their builds are nearing completion but, like a lot of my builds for this project, I’m still waiting on a couple pieces to come in from either my friend, or perhaps bricklink.

Luckily, it’s not too much of a setback with this group because they’re Straight Outta Karzahni, looking fly as… well, some kind of worm or flightless insect. 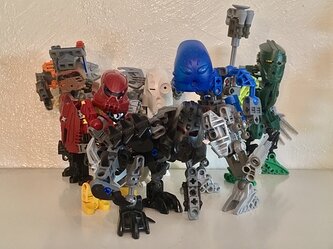 Basically, I’m working on roughing up their builds, which is especially important since I’m not interested in roughing up my pieces. But one things for sure, these squirts are tough and scrappy, so they gotta look it. I’m stripping color here, “remodeling” parts there, and just making them about as frustrating to look at as their lives probably are to live. 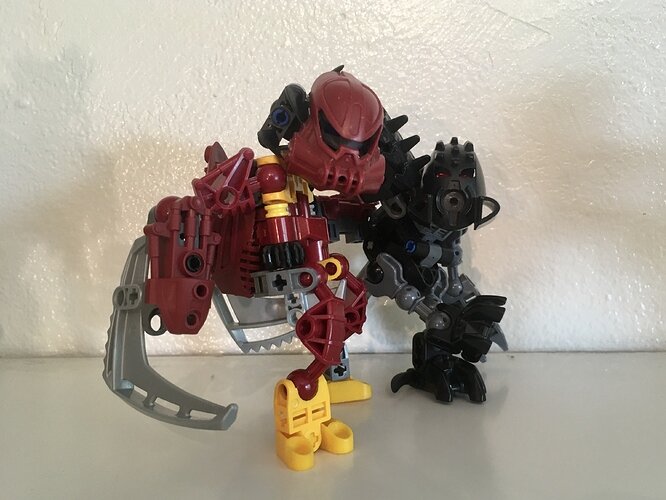 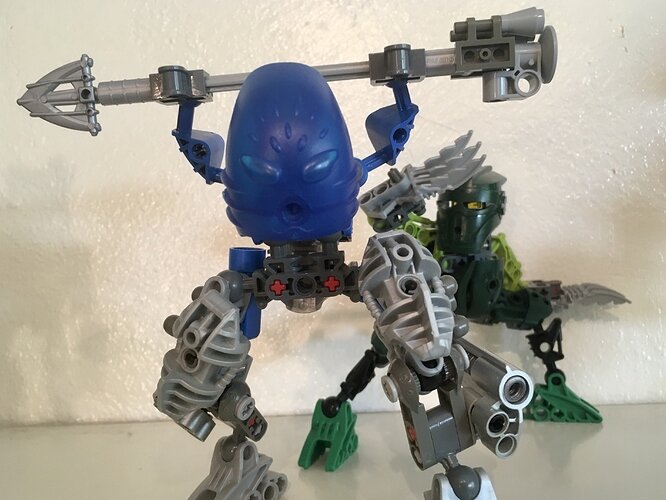 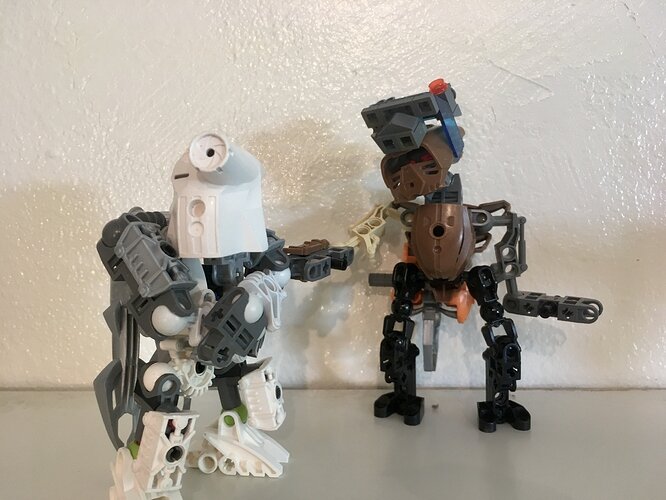 I have yet to touch up Dalu and Kazi, or is it touch them down in this case? I’m so proud of their builds and I hate to ruin them, but they need the mark of Karzahni’s hand, or they wouldn’t be holding those kickin’ weapons. 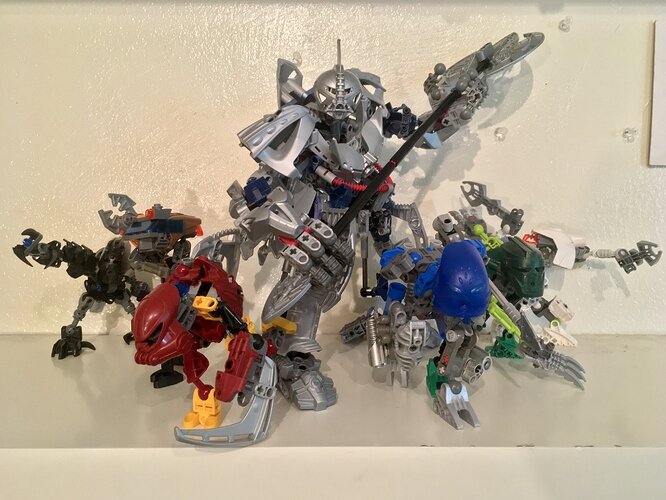 One thing going on with the writing side of these characters is I’d like to go deeper into their past, personalities, and relationships than official media ever did, but it might mean wedging in a whole episode, or even two, dedicated to the stories they share. I’m thinking it could turn out quite worth it, because I would probably get to talk about the other matoran in their lives, which could either really flesh out the setting, or really take up too much time on irrelevant stuff.

While I’ve already lined up some fun and spunky scenes for them, I have no idea how much more I’m gonna try and roll in. A recent finding is that the scripts I’m writing right now might wind up twice as long as I’d like, which might mean putting out twice the episode count in the end! This actually excites me, but it also calls for a Major ■■■■■ in the whole plot outline, so it’s good that I’m still so early in my process!

Any questions about these guys or anything else with this project, feel free to look at my “‘Project : Ignition’ Stop Motion Introduction” post for more info, or simply ask me here!

These are really cool, I like the way you have been able to keep the personality in each of the Matorans builds, over all great revamp

I like how Dalu looks like a T-Rex with those tiny arms, I honestly feel like that doesn’t need a touch up, since Karzahni could reasonably curse her with the inability to reach absolutely anything

I also like your idea to get deeper into their personalities and stories, as much as people like these stories, Greg’s writing could use some… edits?

You feel me, man. And yeah, that’s kinda what I put into Dalu’s design. And Dalu is “the warrior” so it’s kinda hard yet funny to imagine, so I wanted to find out if it’d be as funny to see… It’s also why I went with a spear instead of dual one-handers. And of course, Kazi has his legs…

And yeah, the “plot” part of BIONICLE’s writing always seemed like a perfectly fertile example of high science-fantasy worldbuilding, but the “dialogue” often suffered, with some exceptions peppered in there. I like to call these “macro writing” and “micro writing” respectively, and people have different levels of skill and talent in each, the way I see it. And the gap between the two gets even wider cause all a corporation really cares about controlling is the dialogue, especially if they’re “marketing” the dialogue toward the kids. So they’re hands are tied. Don’t get me wrong, i intend to stay kid friendly, I just want to see it the way I’m envisioning it.

I hadn’t even thought about how the spear effects the build and her character, I really like that subtle but brilliantly different change.

Don’t get me wrong, i intend to stay kid friendly

Full respect to that, as much as I do love some GoT style gruesomeness, Bionicle was and will always be a toy line for teens first and foremost. I’m excited to see what you envisioned in full when you get to making it

I really like the unique look of these guys, though I wish there were some better individual pictures of each.

I do like the unique look you gave them, though some of them (namely Dalu/Velika) need a bit more color consistency.

I hear you, but the awful feeling it incites to look at themis kinda part of the design. Karzahni messed these guys up, and since then they’ve been scrounging for materials. That’s why I went with red and blue pins instead of neutrals for them. I might try to ease up on the amount of black on Velika, but I can’t make guarantees.

Thanks for the input, though, I’ll consider making it look like they used to have more consistent schemes.

by that logic, how come they have semi-consistent color schemes at all?

Thanks a lot! I might chose to do a highlight on one of them somewhat soon, but I’ll do another Team Update on these guys in, let’s see… 6 weeks or so, after I’ve gotten the first update on the other teams up, then I’ll continue to rotate.

I like the idea here- they maintain that very unique Voya Nui aesthetic, yet you can tell the Mata-toran design influences here. I do like the unique builds of each, which was definitely a first for Bionicle at the time; I will say that some elements here feel unfinished, but I can pass that as being a trait of the Voyatoran themselves rather than a flaw in the design

Yeah, I’m realizing it was an interesting choice for my first direct MOC post xD

Setting expectations low, I guess. I think that’ll turn out to be a good thing, though. Plus, I’ll have plenty of time to update them, and you guys, in the future!

Next week’s team will be a fun one!

I still haven’t answered it yet! It might be the ultimate way to honor the LEGO medium, to do a horrendous mash of weird colors. So, for now, I’ve scrambled them a little, but I like their shapes.