Ok I know this is crap but she is old and was one of my first Mocs in a while when I made her, really I have no idea why I did but I did so here you go (and yes I know I’m bad at writing) 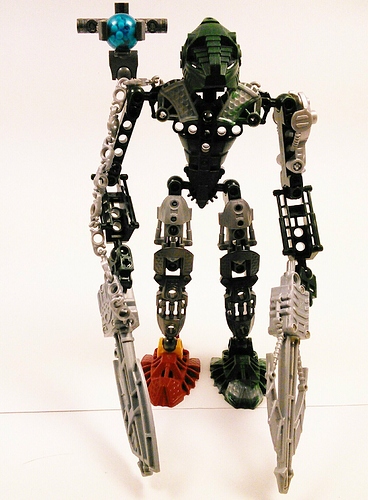 Tekal was originally a skilled thief from Le-Metru until one day she heard a rumour about a abandoned fortress on a nearby island that housed a treasure of unknowable wealth. When she got to the island she discovered that it wasn’t abandoned and rundown as it seemed it had multiple traps that she was lucky to escape from and strange robotic defenders who appeared to only have one thought which was protect the treasure at all costs. When Tekal finally made it to the treasure she discovered that the treasure was an object of great power but when she tried to pick it up it transferred its power into Tekal turning her into a toa of air and it changed her tools/weapons into 2 beam swords and a plasma cannon on her shoulder along with changing her mask of invisibility and speed. She then fought her way out of the fortress destroying all of the robotic defenders but in doing so her leg was damaged forcing her to replace it with parts from the defenders. She is still a their but she won’t rob matoran and she helps them when they are in need of it.
Attitude: mischievous, happy, likes to steal anything she see’s that she wants, slightly suspicious of new matoran and toa.
Toa type: toa of air
Mask powers: mask of invisibility and speed
Powers: controls air
Other attributes: plasma cannon shoots large blasts of plasma, beam swords can be used as swords or shoot beams of concentrated energy.

That’s not a Zamor sphere, that’s from neoshifters!

@kanohippy Oh that, ja I kinda couldn’t find any at the time so I stuck that in there and after I liked it so I never changed it… I did have some of those kits before, got rid of them though sadly.

@Sealman133 Thanks, but what exactly is Watson style? sounds interesting. Ah ok that makes more sense, also I know what you mean! The auto correct can be evil! Also thanks, the hammer was awesome to make, took me hours.

Nice build! Like the Watson style.
Weapon style, sorry my spell check on my phone sucks…