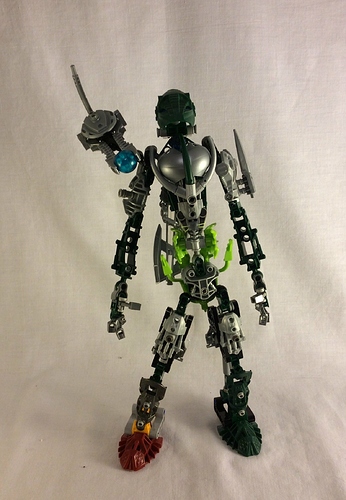 image.jpeg1596×2305 610 KB
Wohoo! I fixed a bunch of her! Changed the spikes on her breast plate to silver claws, increased her arm length and fixed the weird angle which came from the connection joints, changed up her waist and such a bit (but I still feel it needs changing) and also gave her better legs! Thanks to @Jal for the leg idea. Also I do want to possibly custom make the lower torso but I have very little ideas on how to so any you have/know about let me know and I’ll see what I can do.

She has essentially gone from normal toa to titan toa in just two days! I’m actually going to incorporate this into her backstory and how she met Qadoentra now!
As said before Qadoentra finally caught up with Tekal after she had left the group for a bit to do a side mission of her own. The side mission was actually why she is now a Titan, she had always felt herself as a liability to the team, despite her amazing gun precision and agility, due to her below average strength. During the misfits travels she heard rumours of a powerful item that would turn a toa into their Titan form, increasing the abilities, but was also heavily guarded by strange, sentient rahi, traps and possibly makuta. After hearing about it she decided to find it so she could become a titan so her strength would increase and she’d be less of a liability to the team. She eventually figured out where it most likely was and when her team was near that area she left to find it. She did manage to get to and use the item, albeit taking quite a bit of damage beforehand, the rumours of how it was guarded all being true and then some.
While it did increase her strength it was less than she expected, putting her at about the average toa’s strength, so while she’s still quite weak she was strong enough to no longer be a liability. She the met Qadoentra before both of them headed back to her team and they discovered what she had done, while they were happy she was stronger they all were somewhat upset that she considered herself to be a liability, her having already proven herself to be amazing asset in battles, and that she had almost died doing so. 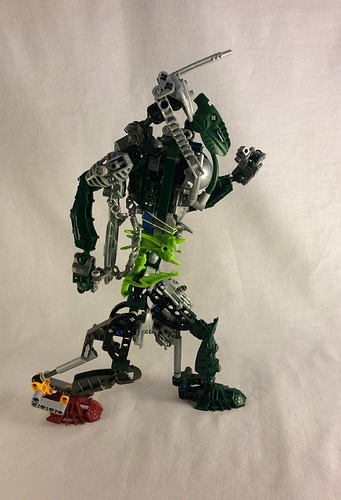 Update: XD! Literally just noticed I put the legs on wrong! The red one is supposed to be her left leg not right one!

The colors are much better; though that Vastus add-on still is very distracting. Otherwise, long torso and incredible gaps in the legs. I’d suggest building completely custom shins.

Ok the shins sound like a good idea, I’ll see what I have also gap in the legs? Don’t exactly know what you’re talking about? (Do you mean for the back part?).
And with the vastus part, tell me do you know of a better part then? If not I’m going to custom paint it to match up because I have no idea what to switch it with.

Yeah, I meant the gaps between the support and the shin parts.
As replacements for the add-ons, I’d suggest some foot piece (Toa Metru for example) and some parts you could attach with rubber bands or some other coverage. I personally would try some tires or treads.

Hmm… That could work with a metru foot and such, I have a couple I could use and some tires that might work, I’ll check em out but if they don’t work out to well I’m going to custom paint it either dark green to match with her build or silver so it matches with the metru torso cover. Also glad to have that explained, I’ll try to fix the shin pieces, just gotta see what I have to work with… Maybe some herofactory plates…

This is a definite improvement over the previous version. However, I would still say that the body is far too long and thin. Lengthening the arms and legs certainly did help make it more proportional overall, but the long torso still throws off the overall shape. It might just be me, though, so modify at your own discretion…

The chest also looks much better without the long spikes.

Yeah the waist is what bugs me the most, I still find it to thin so I’ve been trying to figure out a way to shorten it and increase the size bus so far I got none. Also I agree with the bit about the spikes, much better.

I really like the top half, looks cohesive and very reminiscent of '05. The bottom, however seems gappy and incomplete. Custom shins would look good, maybe something like scavenged Roodaka legs or some such, I default to just using her foot design when my feet arent working out. As far as proportions are concerned, do whatever looks good to you! Bionicles are just humanoid creations, it’s not like they’re supposed to look a certain way.

Yeah I have to agree with you on the bottom half, I still really want to fix it but have no idea how yet as fro the roodaka leg idea that could work, I’ll see what it looks like, still need to fix the shins…