So yeah I just found out what happens when I watch a bunch of biorockdudes videos an am having random female moc inspiration week or whatever. 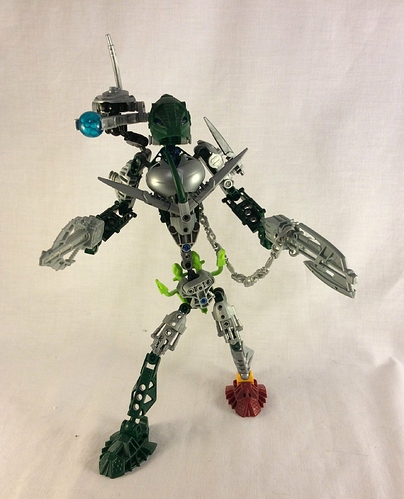 image.jpeg1854×2291 636 KB
So yeah I accidentally revamped Tekal. I just found out what happens when I watch a bunch of biorockdudes videos (especially the how to’s) in a row. So yeah I think I was trying to make a cydrone? Either that or I was just trying to make a random custom female torso, I didn’t even plan for it to be a revamp of Tekal until I noticed the colour scheme matched up and I couldn’t get the idea out of my head. Here’s the thing, I never planned to ever upgrade her or anything like that so when this happened I was amazed. She did come out taller than I wanted and before anyone starts pointing out the lower torso and leg length, I know! I just don’t know how to make the legs longer and such at this time so if you have any ideas let me know and I’ll try em out.

Tekal was originally a skilled thief from Le-Metru until one day she heard a rumour about a abandoned fortress on a nearby island that housed a treasure of unknowable wealth. When she got to the island she discovered that it wasn’t abandoned and rundown as it seemed it had multiple traps that she was lucky to escape from and strange robotic defenders who appeared to only have one thought which was protect the treasure at all costs. When Tekal finally made it to the treasure she discovered that the treasure was an object of great power but when she tried to pick it up it transferred its power into Tekal turning her into a toa of air and it changed her tools/weapons into 2 beam swords and a plasma cannon on her shoulder along with changing her mask of invisibility and speed. She then fought her way out of the fortress destroying all of the robotic defenders but in doing so her leg was damaged forcing her to replace it with parts from the defenders. She is still a theif but she won’t rob matoran and she helps them when they are in need of it.

Also she won’t steal from the poor/less well off and if their situation is bad enough and she recently robbed someplace/one nearby she’ll give them some of her ill gotten goods, not all of them of course, she’ll still keep most for herslef, for she did otherwise then she wouldn’t be Tekal.
Attitude: mischievous, happy, likes to steal anything she see’s that she wants, slightly suspicious of new matoran and toa.
Toa type: toa of air
Mask powers: mask of invisibility and speed
Powers: controls air
Other attributes: plasma cannon shoots large blasts of plasma, beam swords can be used as swords or shoot beams of concentrated energy.

She is very weak physically but make up for that in speed, agility, aim and parkour skills. This is also why she tends to only use guns, she avoids physical fights and will attempt to run away from one, that’s not to say she can’t fight she’s just less good at it.

I may or may not put her in a relationship with Qadoentra but so far the idea is working for me.

This is also the third female moc I’ve made recently, I have two new ones and her as a revamp. 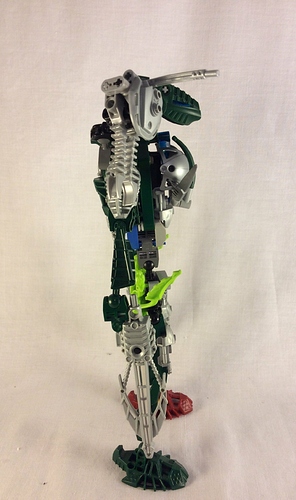 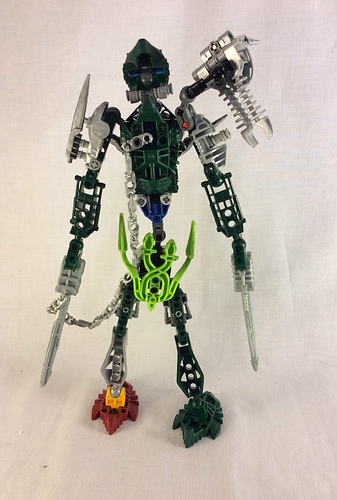 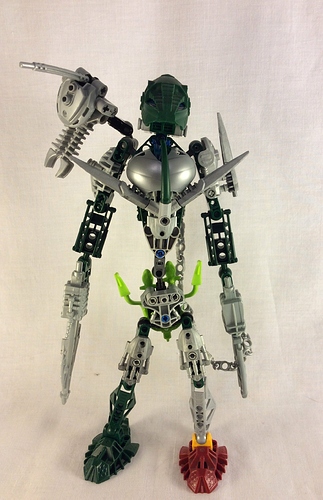 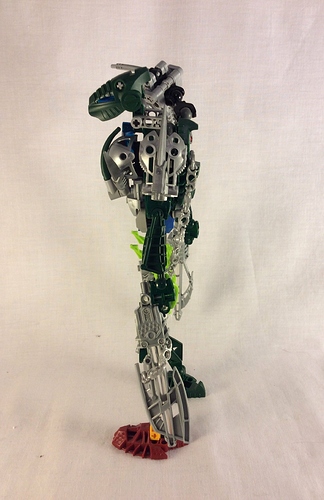 Shoulder cannons
So yeah these are the two shoulder cannon designs I had but I don’t know which to use, right now I’m preferring the top one but let me know what you think. 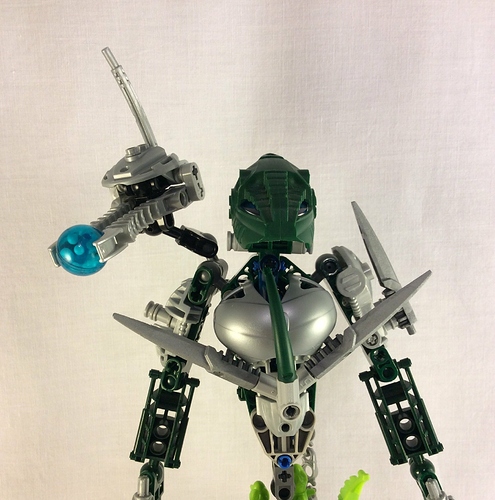 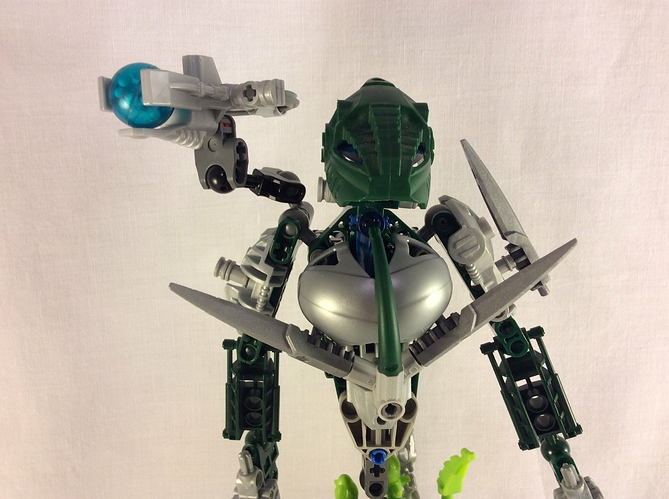 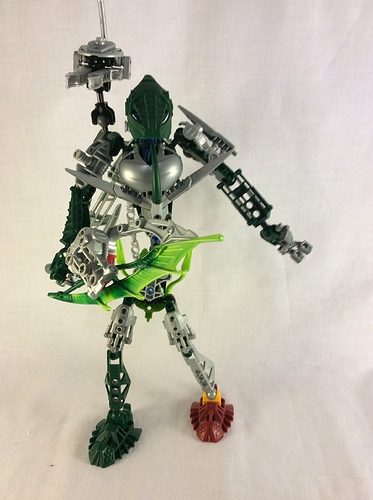 image.jpeg1936×2592 939 KB
This is just a small blade Tekal cobbled together for when she needs to physically fight, it can shoot weak blasts of wind from the tip, which she usually uses to knock an enemy back so she can get farther away and use her guns.
3 Likes
ReeseEH March 8, 2017, 9:03pm #2

Easily the biggest downfall of this MOC is the looooong torso. It throw the proportions waaaay off. The upper torso looks good, though the two HF spikes stick out much too far. Everything else is pretty basic.

I know! The torso to limb length really bugs me but I don’t have the peices to fix it yet! So arghhhhh! The HF spikes could be switched out for smaller spikes but I’ll have to figure out which to use first.

just don’t know how to make the legs longer and such at this time so if you have any ideas let me know and I’ll try em out.

As for the build, the torso is great, and designed quite well.
You might want to bulk up the waist, as it’s looking a little thin. Also extending the shoulders might help possibility as well.

If your low on parts then I can recommend Bricklink as they tend to sell whatever you might need.

Yeah the waist was difficult and I did try to change it a couple times but I never could get a good enough build for it so I’m still working on it… Shoulders, shoulders yeah I can extend those I’ll just have to see how well it looks.

Also technical built legs… Sounds like a good idea! I’ll try it out, probably going to use piston peices for it.

first off, beating a dead horse, but the torso needs to be cut down in length by about 1/2. tha’d fix 60% of the proportion problems right off the bat.

Secondly, go o’er to Bricklink, when ya can, and replace the lower left leg (the viewer’s right side.) tha’d fix some color issues. also, ditch the Vastus addon. it adds an extra color that should be dropped.

The MOC is okay but the torso is far too long and the left leg doesn’t looks right, mainly due the the red.

Ok so you didn’t read her bio then, which explains the leg (also because I didn’t have another one). Ok so for the torso length I’m trying to fix that but it’s really difficult due to lack of ideas for custom lower torsos. For the vastus addon, tell me do you know of a better piece I could use back there then? Because if I can find a better one I’ll go for it.

@BBricks at least he does good vids, some of them are pretty funny. I know about the torso and am trying to fix it, as for the leg read her bio and you’ll understand why (still might change it later but I’ll think about it.)

The updates are pretty cool, though you might want to remove the original pictures so you don’t confuse anyone.