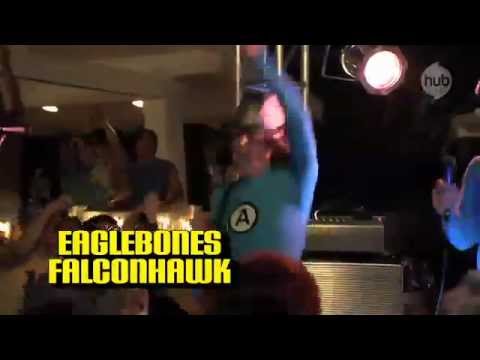 I think that the video speaks for itself. Not only having had a television series on the now defunct HUB network, The Aquabats are a legitimate band who go on tour every now and again. In light of their recent effort to try and build up support for a continuation of the show, I was surprised that an Aquabats topic hadn’t been made already. So I made one. Already.

Some of my favorite songs of theirs include “Super Rad”,“Canis Lupus”, and “Powdered Milk Man”

YEASSS! The Aquabats are great, but they defiantly aren’t for everyone. Though, if you like cheesy and random stuff I highly recommend watching The Aquabats Super Show.

Oh yeah! I remember this show! It was the weirdest thing but absolutely fantastic. Plus that twist ending that I never would have expected a show like this to pull off.

I remember I loved the Aquabats super show as a kid, but I never really liked their music.

I used to love this show so much. It’s just perfect on all levels.
I need to get round to watching it again.

If I remember it’s on Netflix.

Oh my gosh! So excited to find this topic on TTV! Possibly my favorite band, I saw them in concert and love their music!

Dang, you are officially the coolest person I know

I saw them in concert

That must have been wild.

Yeah, and Reel big fish played right after them, they are going on tour again with them this year, hopefully presenting their new album, “Kooky Spooky In Stereo”! I own all of their albums and am a part of their aquacadet fan club as well as a part of the legion of righteous comrades.

I want Lego to release Aquabats! sets so bad

they are going on tour again with them this year

too soon man… too soon.

I was planning on seeing them again this summer… what a bummer.

Listening to their new single rn

I think “no one wants to party” is much more similar to their older almost surfer rock sound, namely from songs like “hey luno” and “the wild sea”. I think their upcoming album is going to be fantastic, I haven’t been disappointed by any of their singles yet!

In my opinion, the more obscure, the better. I love hearing their unreleased, experimental stuff

I’ve just rediscovered this show and i’m not sure why but i love it.
also this show scared me as a young lad

I read this and thought it was about the bats on TTV!