The Brotherhood of Makuta Podcast!

Hey everyone!
I’ve got some exciting news!

So, I just wanted to let you guys know and stuff.
Although I might not make it for the 2nd episode just yet.

Oh, and, here’s @Joev14 with the description of what it all is!

"Hey, what’s up guys, this is Joev14, Director, Narrator, and all around guy in charge of the Bionicle: Audio Narration Project.

For those of you who don’t know me, I was once a guest in a few of the TTV Podcast episodes. I also had a Podcast of my own that began on their channel, called III Facecast. In March of 2014, the series sadly began to decline, and eventually ended due to lack of a consistent cast.

However, over the course of the past few months, I’ve been talking with the members of ANP, and we have decided to start up the podcast again! However, with the new year and new cast, we decided to give it a new name: The Brotherhood of Makuta Podcast.
This series will feature a cast of people with high quality microphones, podcast and voice acting experience, and lots of fun segments, like improv acting, MOCs, Art, and Story Spotlights, story and set discussion of both the new and old Bionicle, as well as other Lego topics. We may also branch out into other news topics as the series progresses. The series will have audience participation. Post a comment with ideas for our segments and improv acting!"

The first episode is below, please give it a thumbs up, and comment both here and on the video if you have any questions or feedback! 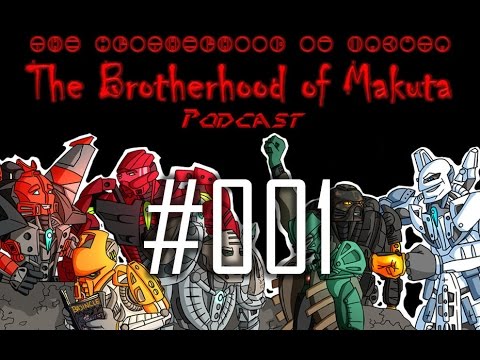 so come up with something ridiculous right? Hm Nuparu and Kongu trying to find a way to eat sand
also good podcast

Podcasts galore. If only someone would join me in the NAROT podcast…