The Court of Lord Brakkon

Wow, thank you! The builds are excellent. Dekkan looks great, too.

Pokoroko is defiantly my favourite so far

Finally got another to show you. Fun fact, take away his weapon, and the only non black part is his eyestalk. 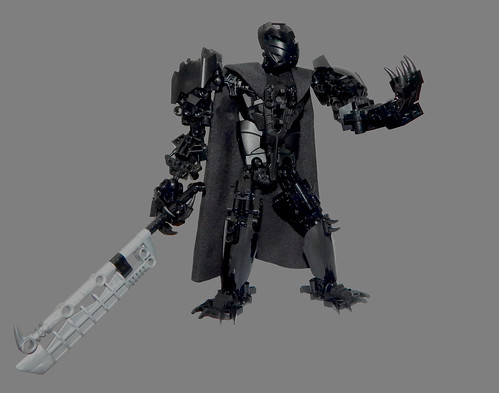 At last, everything is dark. I like things dark. It hides light. Light is annoying. It hurts my eyes. I also have a mask that lets me see in the dark, so why do I even need light? Light should be banned. Or at least fined. Heavily.

Where was I? Right. Darkness. darkness is where I thrive. I can handout my narcotics in the dark. All the matoran will learn the true meaning of-

“Sorry to interrupt your brooding, but do you know where the latest batch was dropped? It wasn’t at the usual place.”

I don’t know. Do I look like a professor or something to you? Shoo! go ask Narco, that’s his job.

Sheesh. Now where was I?

Bah, the mood is gone.

Been a few weeks since my last update, but finally got time to edit another photo (Cropping out backgrounds of Bionicles is not fun…) This guy is maybe my least favorite. His proportions are a little odd, and his legs are definitely skinny. But I was trying to go for a taller, lankier look. 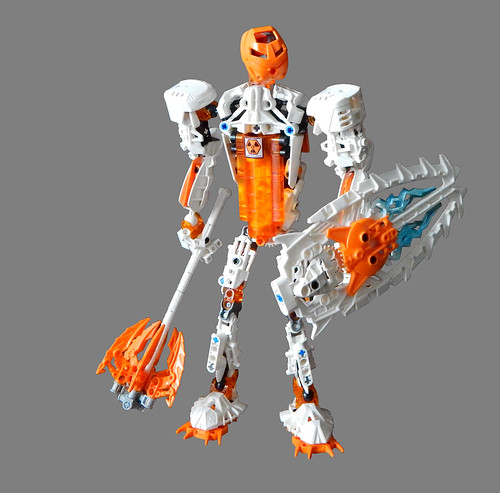 Suumars sat back into a soft chair and kicked his feet up onto the table. He leaned his spiked mace against his shield, resting upon the table his feet occupied. It had been a long mission, and mostly successful. A group of beings were taking advantage of this new world, posing as Toa. Similar things were happening here on Getho Nui, but his mission was taking him far away, islands such as Bara Magna, Motano Nui, and the Cursed Islands.

“How was your latest excursion?” asked Plafontu as he walked in.

"It was good. Our villain showed up right when he was supposed to, didn’t inflict too much damage, we chased him off, and the Matoran lavished us with gifts. Useless gifts. Vo-Matoran aren’t the greatest carvers after all.

Plafontu nodded vigorously. “Good good. How long until your next trip?”

“Not long. The group I have infiltrated thinks I’m visiting my home island. I have about a week.” 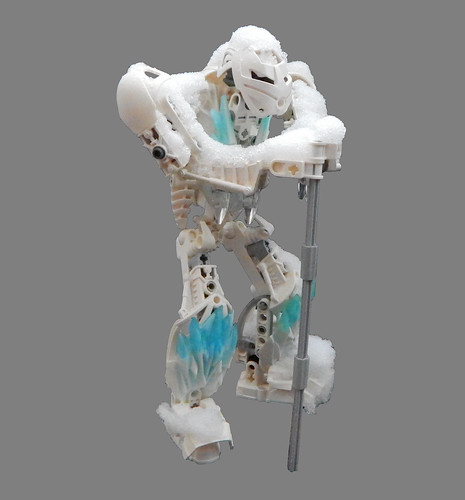 The icy wind blew across the frozen surface of the mountain. It was not an easy climb to reach it, few made the journey. Fewer survived.

Brakkon had made this journey three times now. Unlike his other seers, Kotor had not followed him to Getho Nui. He remained behind on the island, an island so remote, few knew its exact location. It’s name a safely guarded secret.

Nearly a day had passed since Brakkon had arrived where Kotor stood. Brakkon had never seen him move the entire time. He hadn’t moved either of the other two times he had made the dangerous journey.

Brakkon didn’t speak. He simply waited. Others may have mistaken Kotor for a frozen statue. even his eyes glowed with only the dimmest of lights. But Brakkon knew.

A flurry of snow started up. a Chill wind blew from the north. The temperature dropped even further. Brakkon tensed.

Slowly Kotor turned his head towards Brakkon. The rest of his body, from his frozen feet, to the arms with their ever growing icicles, didn’t move. Suddenly, silence fell. A deep silence, one so deep, you could hear your own heart light pulse.

And a bonus picture for this guy: 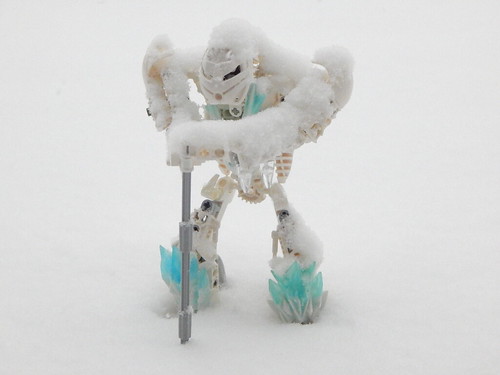 I was trying to build a character that looked frozen, standing out in the snow, still as an icicle. It turned out ok. And then I stuck him outside during a late winter snowfall.

Thanks, I definitely think the use of real snow was a needed element to him.

And here’s another! This MOC is an interesting one as he is a repurposed old Toa MOC that I swapped out the mask, and now he is part of the Court. 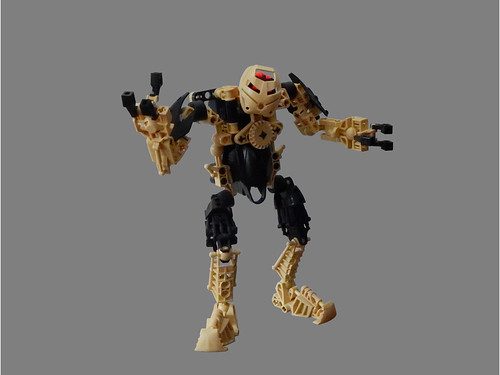 “And that’s when I hopped back into the portal, and finished my life as a toa!”

D.C. stared at Hafooledu. “Why are you telling me this? Narco is over there. If I wanted to hear your story, I would have Narco read it to me in the shadows of darkness.”

Hafooledu scratched his head. “How does darkness have a shadow?” Isn’t the shadow darkness?"

“That makes no sense.”

“You aren’t a professor, how would you know?”

Ooh he’s pretty cool. I like the mechanical look

Well, here’s the next one. Only a handful left after this guy. Calvert here was, like the last guy, built before I had the whole court idea in mind, so he doesn’t quite fit in with the rest of the seers. Had to make up a backstory to saw why his name doesn’t fit the same theming as the other seers (Which is to use the Ta, Ga, Po, etc. prefix for the names.) still, I like him as a MOC, but may have to rebuild him to better fit with the theme. 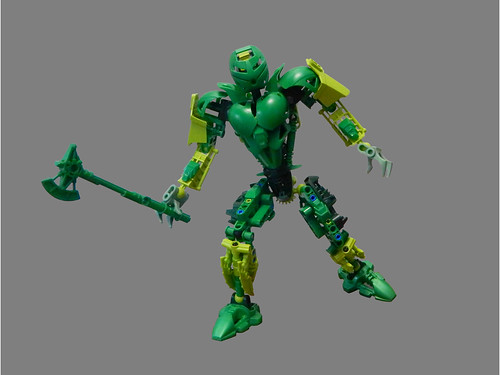 Calvert stood his ground and swung his axe at his opponent. A satisfying crunch occurred as the blade sunk deep into the armor of the best. It howled in pain. Calvert wrenched his blade free, and swung it again, this time boosting the swing with some wind generated by himself. This time, the rahi’s head came clean off it’s body. The body slumped down, lifeless, and the head rolled away.

“There. One less Muaka to bother you.” he said to the three Le-Matoran who crouched fearfully behind a dead log.

The matoran babbled their thanks as they got up slowly.

“Yeah yeah, Just go back to your… Whatever it was you were doing.”

“Thank you once again, great Toa-hero!” They said in unison as one final thanks before leaving.

Calvert glared at the matoran’s backs. Their lingo never ceased to annoy him. He had been trying his best to rid them of their “hoodoo-speak” as the called it, and he had even been somewhat successful.

A minute later and all was quiet again. The wind blew through the hoodoos around the village of Le-matoran. Most of the villagers were out doing whatever it was they did. Calvert preferred it this way. It was much easier to listen to the wind currents without the babble of matoran around. He didn’t use his seer powers much these days. With his other Brothers and sister, there was little need to. Though to be honest, only 3 of the 6 actually did much. Pokoroko, Tallon, and Gamrial did most of Brakkons “seering”. Kotor never left his mountain, though whenever he did speak, it was worth listening too. Onucotic, or D.C. as he liked to be called, had almost completely shunned his seering past, Though it was mostly because of an injury in the past that left him slightly…well, stupider. Calvert kept a close eye on D.C. Before that injury, the two had been best friends. D.C. somewhat remembered the friendship, but in a twisted warped way. Calvert gave a wistful smile, his thoughts returning to those days. He had even been known by a different name back then, much Like D.C. His original name was Lecvart. He never liked it, so he re-arranged the letters to something more pleasing to himself. D.C. Had approved of the change.

Calvert smirked at himself. Even he was referring to Onucotic as D.C. now.

Oooo, I think this one is my favorite so far.