Many had faced the executioner, none had survived. Countless attempted to escape from that dank Bastille, those who evaded guards and hounds were alas fated to fall to that great crude blade.

He heard the patter of bare feet upon the cobblestones and unsheathed his weapon with a resigned apathy, then he saw his foes. Two children barely older than ten at the most. Who knows what atrocities they had suffered in those dungeons. It would be so easy to let them escape, “just step to the side” he told himself over and over again. Only when he realised he had mindlessly assumed a combat stance he stopped and silently wept.

For many had faced the executioner, none had survived. 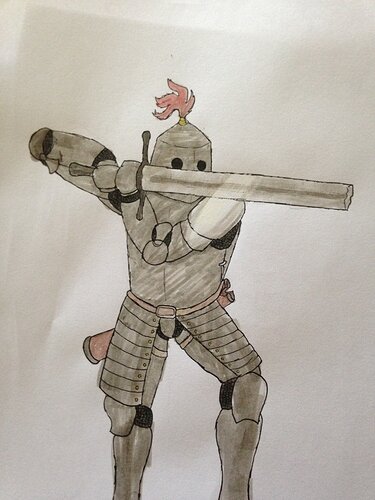 The light shaft from the blade to the shoulder is neat.

Thank you, I had been experimenting with lighting on metal and shading pens

One of my favourite swords made