I heard word about this contest going on and I was interested in this secondary part of the contest, so I figured why not give it a shot?

So I decided to go with a simple but straightforward conception overall in design. Considering she’s the first Toa in existence I thought It’d make sense to add just a wee bit of “jank” to her silhouette and details. Not enough to be over-bearing but enough to get the point across. And considering the physical set design that won the first part of the contest successfully shows this off for the most part, the only real change I added to her was in making her torso area similar to that of the Toa Mata (mainly the upper part of the body). 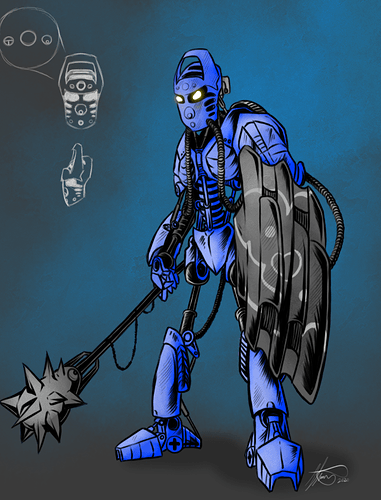 When it comes to her mask, the mask of psychometry, I had the thought process of “what if this mask was made in 2001 but was able to blend a combination of simple with intricacy?”

So I made her mask with that in mind. her mask has vent holes like you’d see on the early masks, but it also has an arch-like top and Matoran language on the mask’s forehead that simply says “TOA”.

So there you have it. I hope you guys like it!

The mask looks a little too much like a combination between a great pakari and a noble ruru to me, but otherwise I love the art.

great design for the mask, amazing!

Amazing. Easily in top 3 so far!

Wow. That is one inspired Kanohi. I really agree with the design process you went through to make it, and I think the results show. The overall interpretation feels a lot like how I’d expect a prototype Toa to appear. Is that a TTV symbol on the shield?

Well, it was meant to be the three virtues symbol sort of at an angle and slightly to the right of the shield. Kind of like a lasered-in symbol that has since faded and aged with time. But now I can also see the TTV one since you mentioned it haha!

Also, thanks for the compliment.

@Solar_Claptrap Hello, sorry for waiting to respond til now.

The mask similarities, especially to the noble Ruru, was kind of intentional. Actually, I wanted it to sort of give off a noble look while obviously being a great mask for that of a Toa since at this point in time she has been around for a long time and has wisdom/knowledge.

My main inspirations for this mask was the noble Ruru and Rau, as well as a tiny bit from the Mata-Nui stone . The Ruru for the arch and the Rau for the “face” part.

This is because I’d like to think that her mask would be an inspiration, a prototype if you will, to other masks in the not-too-distant future. And since she is a Toa of the element of water, having her mask similar to the Rau made sense to me.

I probably should of clarified this in my initial post, sorry.

I actually meant “TTV” as “the Three Virtues”

but looks like we’ve both learned from each other inadvertently!

Just wanted to let you know that this is one of my underdog favorites so far, great work!