The Future of Constraction

Bionicle is in it's second year, Star Wars figures are on the rise, Mixels are still popular, and CCBS parts are seeing more and more use in system sets. Where can it go from here? What do you think lies in the future for Constraction as a whole? What might we see later on? Feel free to share your thoughts on what you think can or will happen.

Honestly, I think it depends heavily upon how well Bionicle does. G2 feels like lego's last stab at an original IP; in theory, it should do well. It has the quality of any other IP, plus a recognizable and prestigious name.

If it doesn't work out, I get the feeling that constraction will be doomed to licensed themes and the occasional system IP spinoff theme(like chima).

If it does work out, then I suspect that we'll see an extension of Bionicle's run time and perhaps a new constraction IP for another target demographic.

Personally I think Lego will continue to have constraction based theme since they've had one for over 15 years, now whether that will be bionicle I can't say. I do think they will keep using it in licensed themes like star wars but if bionicle does end after 2017, well I think that they will make another ip similar to how they made hero factory, just something basic so they can try new things techniques or even systems and have cool and creative designs without the constraints of only using licensed charecters, and still satisfy the niche audience that loves constraction.

Feel free to share your thoughts on what you think can or will happen.

Bionicle will probably end in late 2018/2019 - i can see it limping its way past the three years it was planned for.

Star Wars CCBS will likely continue until the release of Star Wars IX in 2019. Maybe we'll see it reach 2020 with the release of the Bobba-Fett Spin-off film, though i feel the line would end after that as most the popular characters will have been represented.

I think Ninjago or Nexo Knights will eventually get a wave or two of CCBS figures based on the main characters and villains - i can see this happening.

Other than that, i think CCBS is unfortunately doomed to occasionally appear in licensed themes.

As for constraction, it'll never really go as it enables for functions in sets and things like that.

can see it limping its way past the three years

what do you mean by limping ? Is it doomed to the same fate as G1 where it'll crash down with a whimper and fall into obscurity? Is Lego really gonna make the same mistake twice? I bet they have a backup plan of some kind

Well maybe constraction will eventually become a sub theme for other themes, like they're doing for star wars.

what do you mean by limping ? Is it doomed to the same fate as G1 where it'll crash down with a whimper and fall into obscurity? Is Lego really gonna make the same mistake twice? I bet they have a backup plan of some kind

I agree. LEGO's the number 1 toy company in the world. They aren't going to murder their perhaps most famous original IP.

Optimistically, I see Bionicle going until at least 2020. Not ten years like G1, but a decent run. I also expect a new IP to take its place that evokes a similar feel and carries on whatever new evolutions of CCBS we get.

Star Wars Constraction will likely be around for as long as Star Wars.

I can see some occasional CCBS figures for some other lines, maybe even Ninjago or (heaven forbid) Nexo Knights.

And I think CCBS as a whole will probably never go away, or live as long as LEGO does. It will be used in sets for whatever reason and I can believe there will always be some sort of line of buildable action figures. It's just a staple now.

I thought of something. what if lego took the ccbs system and downscaled the pieces (so they fit on mixel joints). So it would pretty much become mini ccbs

this could be extremely helpfull for system mechs. And it should combat arms and legs looking like this 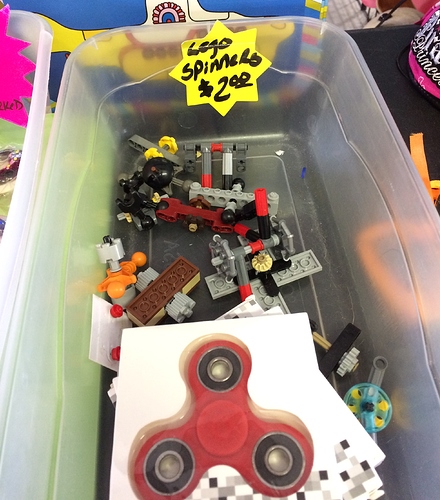 The future of constraction is indeed bright.