Hey there!
So before I begin, I’m going to use this design for my own BIonicle G3 regardless of whether or not it is used for TTV’s G3.

So here’s what I’m thinking for the Island: 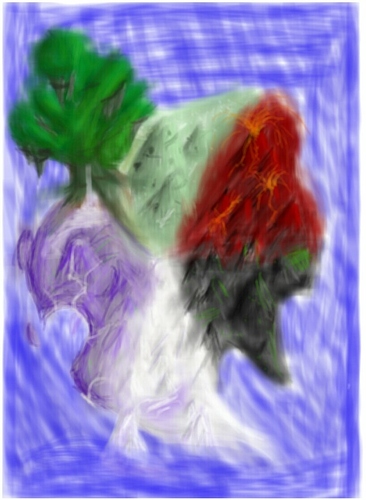 The Region of Oceans: AKA the Water region/Ga-Koro. This was thee first one I drew, so it’s the worst out of the bunch. If you want to see better artwork, go see @Oomatu’s topics (Seriously, if you’ve not seen them, what are you doing?)
**The Region of Frost:**Name’s subject to change, but basically there’s a bunch of snowy mountains, with perhaps some glaciers floating in the sea. I imagine the Matoran here strive to feel the most connected to Mata Nui, so they isolate themselves to do so.
The Region of Quakes: Subject to change, again. Just some black mouintains with patches of vegetation/crops on top of them; there would be caves in the mountains, where the matoran live, as well.
**The Region of Magma:**Bunch of mountains and a few volcanoes here and there. Matoran here are warriors, Mercenaries, guards, etc. They strive to maintain there warrior status all their life.
The Region of Deserts: Here, stone matoran labor in mines, in what I picture as those giant termite mound things one would see in Africa (if that’s not an accurate description, then I’m sorry)
**The Region of Skies:**I picture the giant mounds of floating ground in the sky, actually being held up by one or multiple giant trees. I took inspiration from the Lego Group’s Idea for the Jungle region, as they wanted a similar concept (but never did/showed it). The Matoran would also have a gliding sports thing, which I will go more in depth to, later.

I love how the Skies region is a little tree. Nice job.

Thank you! (Though the tree would definitely not be “little”

I feel the overall concept suffers from G2 Okoto syndrome, where all the elements are sectioned off from one another like a multi-topped pizza. I feel the island of Mata Nui (and for that, Voya Nui), worked better as they looked like genuine islands that could exist in the real world. I don’t know, maybe if each region was its own massive island, similar to Avatar the Last Air Bender, that would be more fitting.

I get what your’re saying, but I think that the “segregation” factor suits G3. (I’m pretty sure the TTV suggested they didn’t want the all the tribes to be on good terms with each other) (Also, spereater islands altogether, I think, wouldn’t work well; the TTV already stated seperate islands would still have different elements on each one)

Mata Nui did segregate it’s people (mainly due to rahi attacks and such).

Now I don’t want every person to be segregated (for example, I’m thinking of making Ga-Matoran traders, and merchants), but I feel that the land should at least be segregated.

Personally, I’d like a little bit more blend between the boundaries of the lands, but my poor digital art skills work let it happen!

I’m not asking that the people shouldn’t be segregated, I actually like the idea of the different tribes having their own qualms with each other while others have their own little alliances (like say Earth and Stone get on really well while the Ice/lightning tribe is very secretive). I do understand that a more “natural blend” between locations would be more difficult to achieve, personally it’s just that I’m not the biggest fan of the whole island being sectioned off so it that it’s obvious to tell who lives where.

Okay, that makes sense; I think Lego did it so it’s easier for kids to differentiate between the tribes. It appeals to me, but I see how it can be a bit bothersome to others.