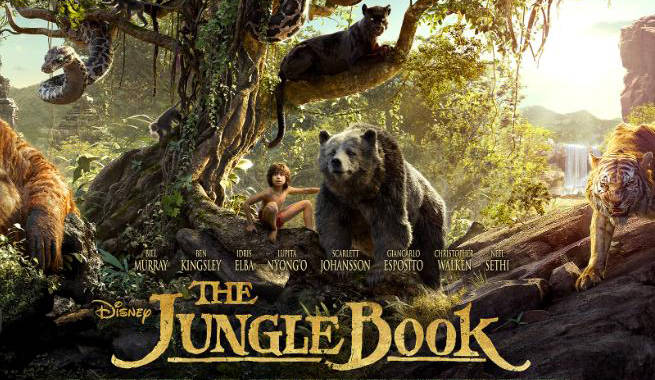 The Disney remake of their 1967 Version. Boy was that movie was intense. Post your thoughts below and remember to use spoiler tags if discussing details.

[spoiler]If you enjoyed the movie, please don’t read any farther because my thoughts are pretty negative.

As a whole I actually really didn’t like it, but first the positive: I really enjoyed Baloo and his relationship with Mowgli. And the graphics were absolutely amazing. However, Shere Khan, the villain, pretty much ruined the whole thing for me. Most of the rest of the film was fine, but generally anything that had Shere Khan in it ruined all my enjoyment.

The movie neither had the charm of the 1967 version, or the strength and justice of the book. In this film Shere Khan blatantly breaks jungle law and no one does anything about it. (spoiler) He kills a Akela and the pack is to cowed to do anything. Simply put there was no justice, and the jungle law seemed redundant. (Similar to if someone is cheating at school and the teachers won’t do anything about it.)

Shere Khan was way Over power. He shrugs off an attack by a bear nearly twice his size, a panther and an entire wolf pack.

Also I didn’t like how Shere Khan cowed mother wolf so much that she didn’t even protect her own cubs, which both unrealistic and bad modeling. (Mother wolf was known as “The Demon” in the book and not as a complement.)

To wrap it up, Shere Khan was extremely over powered in both strength and influence.
And didn’t like how the villain was used and feel it dishonors both the book and the old movie.

I should watch this.

It was good, but I watches during a storm, so power outages were frequent, and ruined the movie a bit.

i wanted to watch it, but I have a phobia of snakes

Holy carp the cg was breathtaking (I still want to see lion king remade with the cg of this) as bill Murray as baloo was an excellent choice as well.

i wanted to watch it, but I have a phobia of snakes

I eventually want to see this. I’m not sure when though.

I kept hearing how good this movie is, but I just don’t care. The movie doesn’t interest me at all, so I’m probably never go to watch it.

My sister really wants to see it, I am kinda indifferent. I never read the book and I don’t like how goofy and weird the animated movie was…so maybe this could be the Jungle book for me?

I was surprised at how much I enjoyed it. This may sound like blasphemy, but I actually liked this more than the 1967 version (I watched them back-to-back). While the old one is a classic, the pacing felt off and it didn’t have as much focus as the new one. Just my thoughts. I still haven’t read the book.

I actually liked the movie, I actually had no interest in seeing it, but it turned out my family wanted to and it was a lot better than I thought it would be.
Before this I had never seen the original. (I’ve seen it now though)

I have no interest in this

Why do people keep saying that?
If you don’t care, don’t come here.
It doesn’t make sense!

Well, I didn’t even know what it was until now, so I thought, what is this?
Then I was like Ok. No interest.

It was a good. The beginning was slow but then it picked up fast.

I watched it a few months ago. I really enjoyed it! I found far better then the animated version IMO. And it honestly had some really…shocking moments.