*sweeps everything off the table
OKAY! As we all know, rahkshi are mutated kraata. In brickonicle, they don’t seem to be. They are matoran who serve the brotherhood of Makuta. But where do Kraata come in?! I would like to propose an idea.

The rahkshi have powers unlike their respective color elements. But, the rahi parts seem to enhance their forms, but not their powers. My idea is that the kraata are strange creatures made from darkness that corrupt what they touch. The convert fire to fear, water to corrosion, Earth to hunger, etc. These also grant powers relating to that element (fire matoran can’t use the fire element unless a toa) much like a corrupted toa stone. The kraata were also used to fuse the rahi and matoran together. This is why turahk isn’t just a matoran with spooky face and spider body, but rather a matoran with spooky face and spider body with powers. Actually, it seems the backs and heads of the rahkshi are accurate to g1 in. Because these features are unlike the rahi they are fused with, Kraata could be the source of those parts.
I just typed that and made it up as I went along, so point out any inconsistent parts.
Also, tell me if I get featured, I don’t watch the brainstorms XD.

But Matoran can wield powers, albeit in a smaller scale than Toa.

I like the Idea of Kraata being the driving force behind the mutation. The cast has mentioned several times, and appears to like the idea of darkness being the elemental trigger to the Matoran devolution into half rahi half matoran monstrosities.

I like the idea, hope the cast changes their mind to include Kraata.

Matoran can wield powers, albeit in a smaller scale than Toa.

That makes sense. I guess it would just upgrade them to toa size.

There was a Rahkshi pitch I recall reading that was from before it was decided to turn the Rahaga into this generation’s version of them. Basically, Kraata was the rank of Brotherhood acolytes who underwent the rites to become Rahkshi, which was the highest rank.

Like I said, this was from a while back, and I haven’t found any references to Kraata in the current bible so I don’t think so.

The pitch also involved Kapura studying the Rahkshi by infiltrating the Brotherhood and posing as a cultist, well before it was established that Iruni would likely be the eyes and ears for the going ons in the organization, and Kapura was written to be one of the five Mangaian rulers.

I think that would make a lot of sense. I’d be cool with this

I don’t believe the Rahkshi are fused with rahi in the current canon.The mutation is due to the Mask of Time backfiring and freezing the island. Since they weren’t Toa level or higher, they couldn’t handle the backlash and mutated.

The powers so far were just saying their natural element became corrupt as they went further to the dark side in the cult. But having the Kraata play a role could work too.

“members of the Brotherhood of Makuta - who are all Matoran as far as I know - fused with Rahi.”
That’s what sanoki said, but everywhere else I’ve mentioned it people haven’t said it was non-canon. Either a lot of people think they are fused with rahi, or the cast mentioned it in the only podcast I watched.

I think the Kraata should not be tied to the Rahkshi’s mutation, but still be used by the Brotherhood.

They could be mixed in with the Krana (both have a similar sounding name) and thus become a form of parasite creature that the Brotherhood found washed up on the island’s shores.

The Kraatas are then used as G3’s Corrupted mask, allowing the Brotherhood to control the wild life on the island. Think of it like the Brains from HF’s Brain Attack, but without the mutation that the brains caused to the animals: 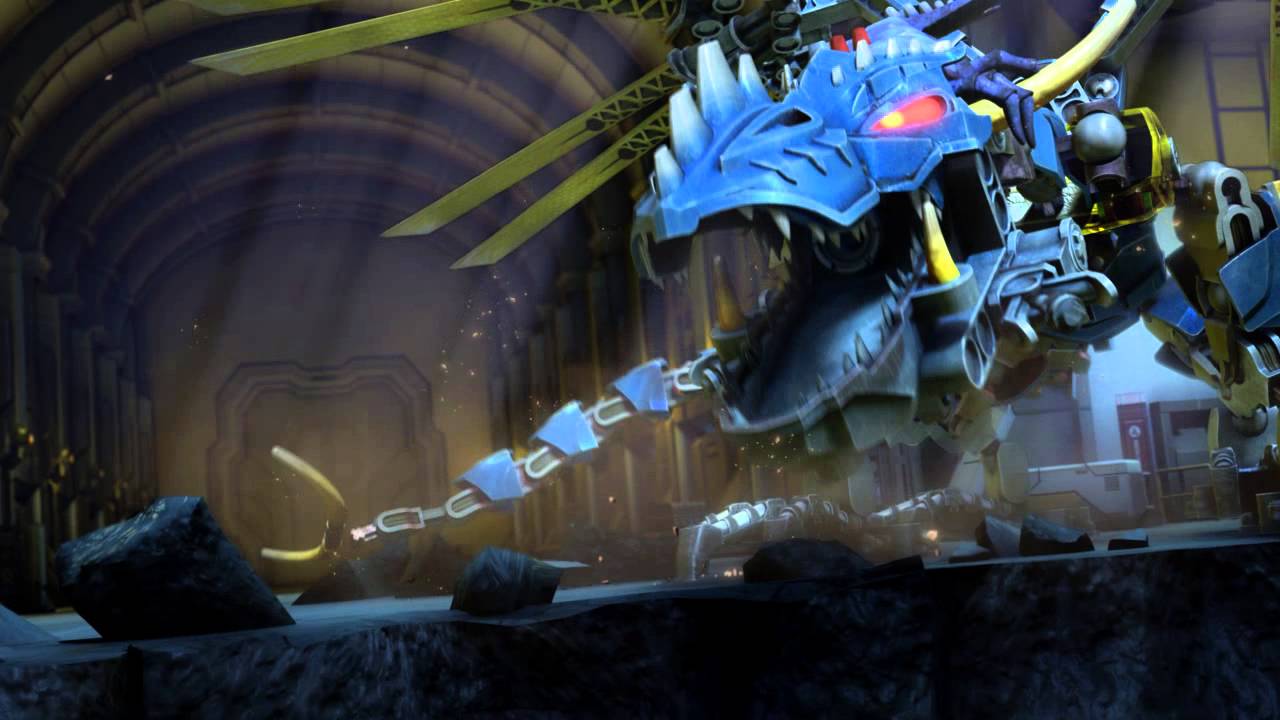 Perhaps going on the line of adding Krana characteristics, maybe they could be used like the Kratana in G1? Showing Brotherhood recruits certain visions or offering suggestions.

Maybe the Kraata were a newer invention, created by the Rahkshi themselves using some sort of alchemy that involved infusing a small part of themselves into the new creature, which allows them to use powers of suggestion to entice? Well that, and maybe the odd cultist proselytizing on the streets.

This builds off a headcanon I had about how Makuta could control the Rahi with infected masks: Kraata were created of the Makuta’s antidermis. Then when they were used them to taint Kanohi, they infused the mask with trace amounts of antidermis, just enough for Makuta to control the wearer like a marionette while the mask was the crossbar.

Ok, took time.
The answer as to why they devolve into Rakshi is explored as a tangent while answering this question. Go to 59:47 the idea starts to develop around 1:07:00. 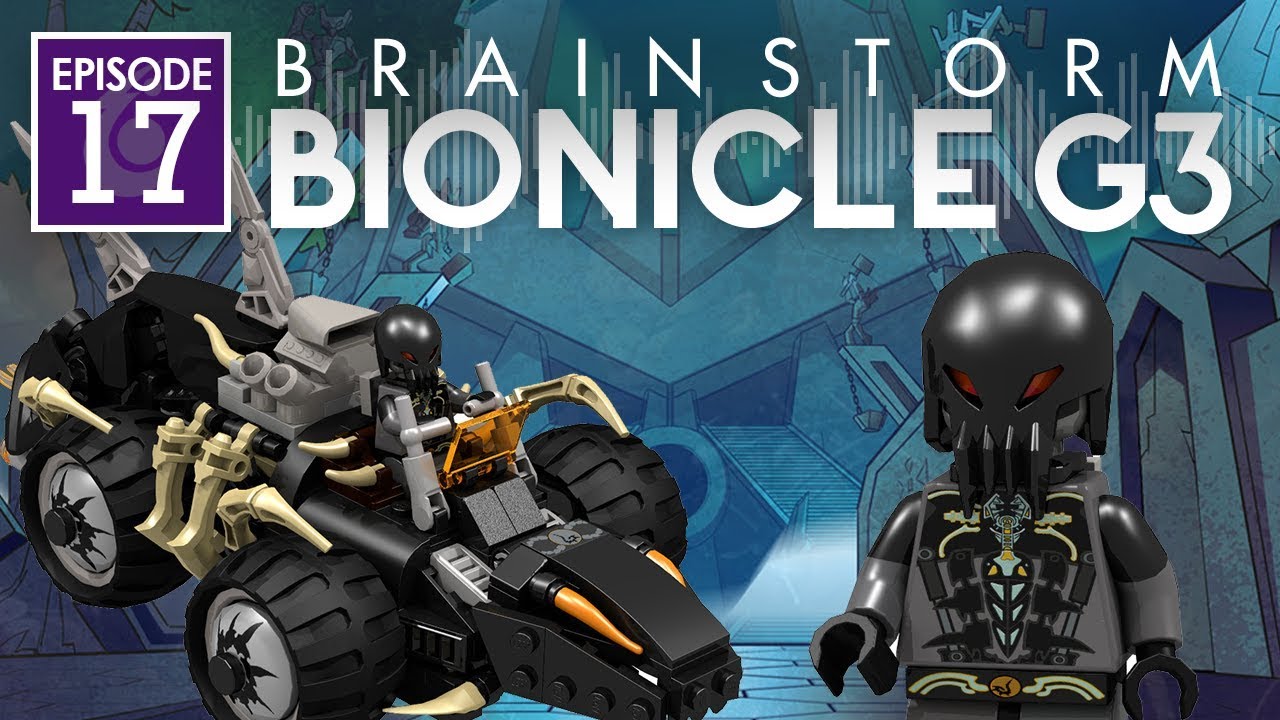 Basically, the part where it is confirmed again, it is basically said “We do know that the great beings chose certain rahi to make the Matoran.”

Building off of Odnanref10993, here was the earlier Rahkshi pitch I had referenced earlier

Well, what with all of this discussion on the role of the Rahkshi would be in Bionicle G3, I've honestly taken a LOT of interest. In particular, I'm VERY inspired by the ideas of others- Namely Vorahk being a hungry, wendigo-like creature, and as I've worked on them, I figured I might as well post a 'mock' in-universe guide to my ideas for the g3 Rahkshi! KAPURA'S GUIDE TO RAHKSHI (And other things to know about them) Hello, Kapura here! As a fellow Matoran and researcher, I feel the need to mention and take into account a recent phenomenon; Rahkshi. As you, dear reader, may know, tales have circulated of a cult; known as the Brotherhood of Makuta, they worship this dark and nasty spirit named Makuta. The stories on this creep vary, from him being the dark brother of our island's cre…

Another interesting note is that Rahkshi themselves in this pitch are actually fusions of a physical avatar and a “Rahkshi spirit” e.g. Tuhrahk is a cultist acting as an avatar for a Tuhra spirit. Cultists also carry staves belonging to the Rahkshi they wish to transform themselves into.

I do like the idea of perhaps some of the Rahkshi’s weapons being tainted by the blowback from the Mask of Time. In Oomatu’s concept art, Tuhrahk is depicted as carrying a spear of which I assume could’ve belonged to him when he was a Mangaian admiral. Kurahk is also depicted as carrying what looks like either a large ice pick, or perhaps an axe. Assuming Lerahk doesn’t have hooked claws in place of his hands, perhaps those green blades were daggers he used when he was Iruni the theif. Panrahk and Vorahk are a little harder to pin down, but I’m going to guess Panrahk’s back pincers were concealed weapons that fused to his body and Vorahk’s might’ve been mining tools or something similar. Gurahk bears no visible weapons unless his/her tentacles count 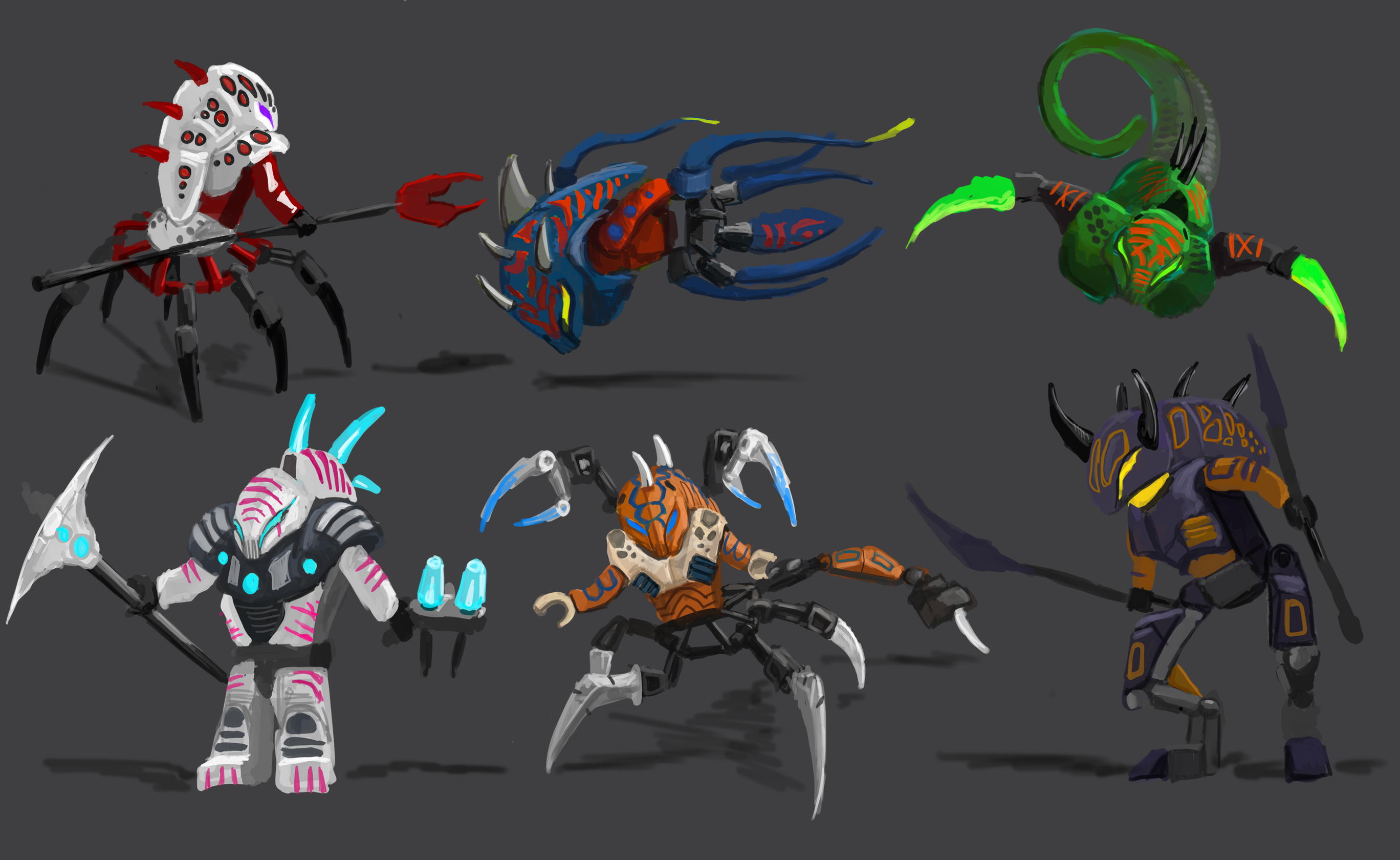 I do like the idea of perhaps some of the Rahkshi’s weapons being tainted by the blowback from the Mask of Time. In Oomatu’s concept art, Tuhrahk is depicted as carrying a spear of which I assume could’ve belonged to him when he was a Mangaian admiral. Kurahk is also depicted as carrying what looks like either a large ice pick, or perhaps an axe. Assuming Lerahk doesn’t have hooked claws in place of his hands, perhaps those green blades were daggers he used when he was Iruni the theif. Panrahk and Vorahk are a little harder to pin down, but I’m going to guess Panrahk’s back pincers were concealed weapons that fused to his body and Vorahk’s might’ve been mining tools or something similar.

This is some ideas I have for the Rahkshi's weapons. (Edit: now with images from @Oomatu) Turahk: [image] Staff of the Brotherhood: A staff given to Norik when he became the Brotherhood's leader and still uses after having become Turahk. While ceremonial in usage, it is still sturdy enough to be used as a weapon. Nightmare dust: A strange form of red dust, believed to be spores from an unknown type of fungus. When inhaled, these spores will cause the victim to suffer horrific hallucinations for a period. Crossbow: Turahk's second weapon for when he rides his pet, Nirahk. Guurahk: [image] Whips of Erosion: Gaaki's main weapons after becoming Guurahk. While their usefulness is only active above water, they are still a dangerous weapon. When the whips hit an opponent, their skin …

That’s an “L” at the end of my name. The fused thing comes from this thread: Brickonicle G3: Official TTV Canon List [CANON][Worldbuilding][Characters][Pitch]

That thread has been replaced by the Story Bible Thread. As well as more recent commentary on how the Rakshi obtained their appearance.

Actually, I just remembered the question was answered in the General Questions topic. I am still looking for the podcast source, should have organized it better. I am sure it is on either episode 14 or 15, but I cannot find it.

Nice idea. The kraata remind me of the brains from Hero factory Brain attack.

*it was kinda the other way around

Also, I don’t think krana should be connected to Kraata. In story, they are completely different beings.

there have been no kranas or kraatas in Brickonicle so far, so they can make changes to them and mix them up into a cross of the two.

My inner rahkshi nerdosity is screaming with rage