This MOC creation i built for the MOC Spotlight! And before i will tell you a bit about this creation, i wold liked to tell you, that i am a Ukrainian Lego fan, which means that my English might not be perfect. Now, when all of that is out of the way. Let me give you details and cocepts behind this evil creation. Ladies and jentleman, here i intoduce - The Laughing Devil - Tyatos! The idea behind this MOC is: i thounght about making a charecter that would fit my Bionicle story book that i will soon start to write. (Actually i have already wrote a book called Karzahni War of the Matorans, and soon i will be releasing it in the Ukraine) But this particular guy will be one of the cgarecters in my new book called: Gelios The Downfall of the King. And this one will obviously be a bad charecter. This villain uses his weapon that is called The Staff of Screams. I want to also point out, that this guy combines PURE EVIL AND MADNESS in himself. The colors are used are mostly red and black. Hope, that my Tyatos is going to be in one of your episodes! See you next time, i am planning to do more MOCs for my Bionicle stories, so when they are ready i will give you an opportunity to see them! Bye for now! 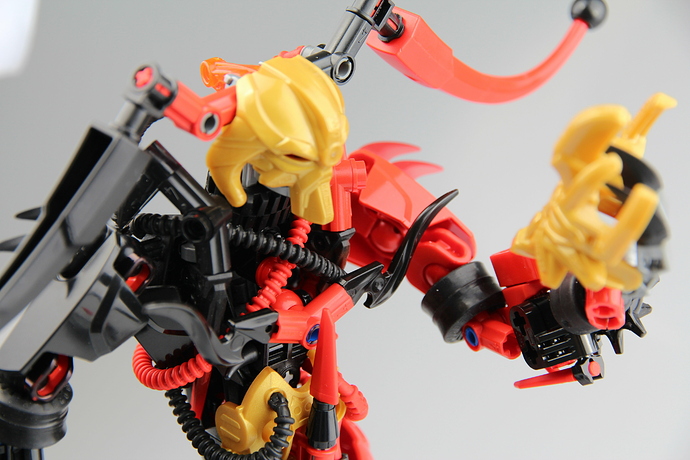 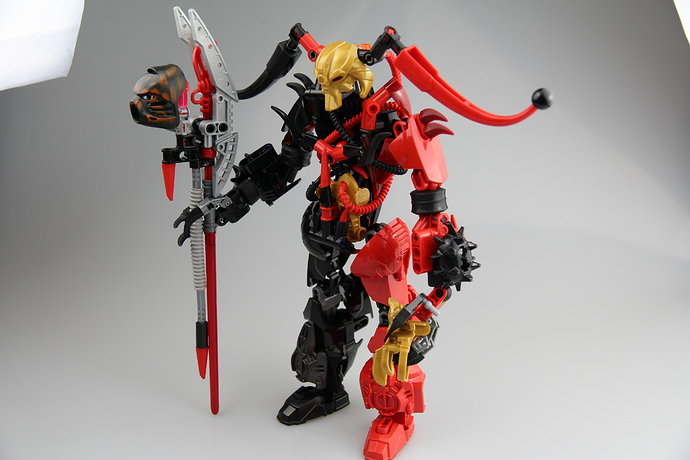 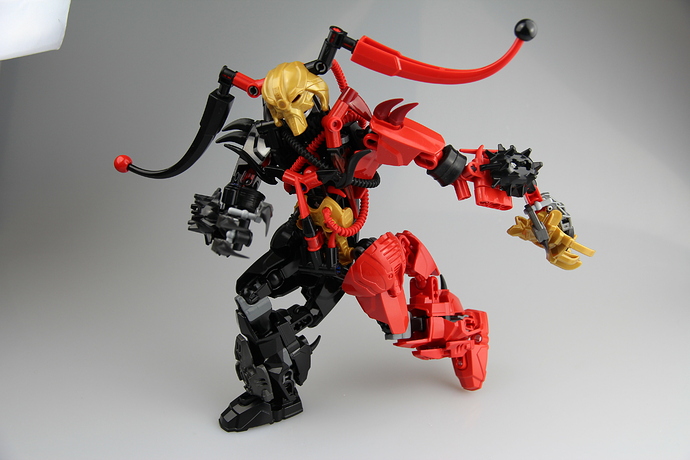 It’s not bad, but the torso seems very cluttered. And you can’t really request to be on the MOC spotlight… Not that you have really, but keep posting stuff, and I’m sure you’ll make it on there. Good luck!

Thanks man, actually all the stuff, that is on the torso is attached very securely. I tried to make the torso as detailed as i could, hope that it turned out nice. Good luck you too!

There is NO connection with Jestro from Nexo Knights what so ever.

Karzahni War of the Matorans, and soon i will be releasing it in the Ukraine

If you’re talking about actually releasing it as a book I have some unfortunate copyright news for you.

As for the MOC itself, my biggest issue is how utterly cluttered that torso is. He’s also got a bit of a pudge belly which is…odd, especially with that weird spike going straight up.

The arms are interesting but I don’t think the design really pulls out from the elbow down, since it’s got all this weird stuff.

Last major issue is how horrible the gold placement is. He’s got it on his face, which is top-level armoring, but the only other place he has it is his waist, as bottom-level armoring.

Overall he’s got some potential but right now he looks like some unholy combination of Jestro and Splitface. Still, keep it up and he might become something great!

Actually, in terms of posebility everything is fine about this model, arms have some good range of motion, as well as the legs.

I like the split concept about it. It’s a very Novel idea.

Plus, I feel that the jester look has been pulled off very well, in that it’s not too prominent, but it’s there if you look for it.

I’m really impressed by the MOC and the photography!

It looks fine, but it would look cooler with a custom painted MoC, maybe to look like it’s, you know, “laughing”.

I like how you pulled off the jester motif here, it really adds to the design.

@darkbrick999 I wanted to do that either, but i didn’t wanted to ruin my only Makuta’s Golden Mask

Hey, welcome to the boards. I’m one of the moderators here, and I wanted to let you know that we don’t allow double posting; posting then posting right after. If you click the word ‘Quadruple Post’, it should take you to our rules. Please read them. Thanks!

I’m getting mideval jester vibes out of this. Looks really good!