The Legend of the BIONICLE: Celebrating 20 years of Lego stories

And bacon. Lots of bacon.

Oh for the Great Spirit’s sake it’s nostalgia! However yes it does take quite nostalgic. A little hint of walnut too

Mmmmmmhhmmmmmn But that Nostalgia does taste good…

With a hint of Pie… mmmmm pie.

@Sokoda, based on your experience on LEGO Ideas, what are some reasons you think LEGO would or wouldn’t approve this project if it reaches 10.000?

Just 1 582 votes and Sokoda will have reached the Goal.

@LegoDavid that’s hard to tell, because they never say why they reject a model. I think it’s good for this build, that lego owns the license.

@VonDoom I think I answered you questions on ideas. I’m no to sure about contacting lego news sites. It may be a bit naive, but I would want them to report on it if they really like it and not just because I asked them to^^

@MaximusPrimal it’s funny to see that meme here I made it. 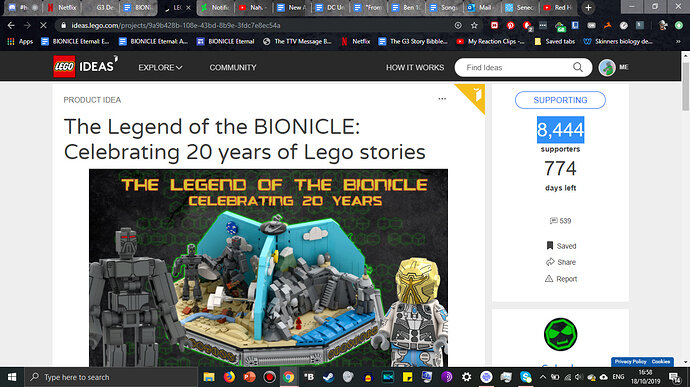 we’re in the endgame now

Though it’s honestly kinda against you.

Though it’s honestly kinda against you

Though it’s honestly kinda against you.

Could you elaborate? I don’t have the time right now to watch a 40 minute discussion video.

It’s more just Callan’s opinion. I don’t really agree with him, but whatever, it’s there.

Essentially, their saying that it kinda misses the soul of Bionicle, which is constraction, and that his choices only really make sense to those who got into bionicle lore.

There we’re other things, but that’s the heart and soul of it.

Callan also says some crap about it lacking Bionicle iconography? Or I guess early G1 iconography, but even that is nonsense. You have the canisters, the beach, you have two different depictions of Mata Nui for crying out loud, and a Bohrok now too.

I do agree that this set doesn’t really mean much to somebody who isn’t already invested in the franchise, but honestly: I couldn’t give a fig. This is a moment for us, the fans, to get a bit of closure. This might be the last Bionicle set ever - why not just let it be fanservice?

In an ideal world, obviously I wish there could be some constraction in there, but Lego isn’t even making those pieces at the moment, so… bleh.

Also, maybe this is an unpopular opinion, but I think the grumblebricks set looks like utter crap. I like the concept of it being more like a traditional set with Bionicle iconography, and that’s about it. I enjoyed the hero factory figures we got in invasion from below, but they look like garbage here, especially for the characters they’re representing. There’s also no real unifying theme in the set, it just feels like a lot of random ideas slapped together, and it’s frustrating because there are so many great locations you could take inspiration from in a set like this and instead of utilising any of them he just creates this weird hodgepodge of a bunch of different concepts. Excuse the mini-rant, but their little aside praising that one over Sokoda’s really tilted me for a lot of reasons I just stated

Essentially, [Callan and Cossy are] saying that it kinda misses the soul of Bionicle, which is constraction,

but honestly, I couldn’t give a fig.

Nah man. If this set get’s produced you’ll be getting a fig. A nicely printed Matoro minifig

Bingo. I just worry it might slow the project down. Though they do say to support ll the projects, but either way.