Moc Information: Kaynak is a robotic entity placed on the outside of the Great spirit robot he has been gifted the the abilities of plasma and minor magnetic abilities to help keep him secured to the outside the Great Spirit Robot. He was placed on the Great spirit Robot by the Great Beings to act as an emergency welder should the hull be damaged severely during its travels. His function is to repair any major hull damage to the the Great Spirit Robot. He has a limited connection the the Bohrok Swarm and the internal systems within the Matoran Universe. His connection allows for status information and locations, but he cannot interact with the systems beyond notifications. 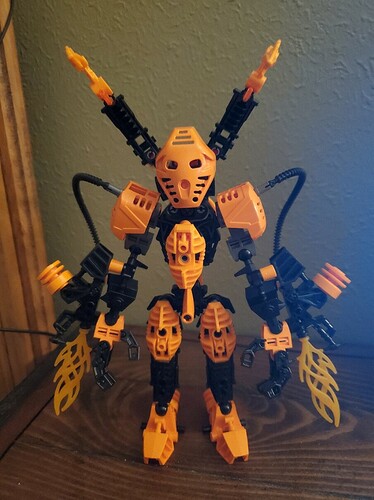 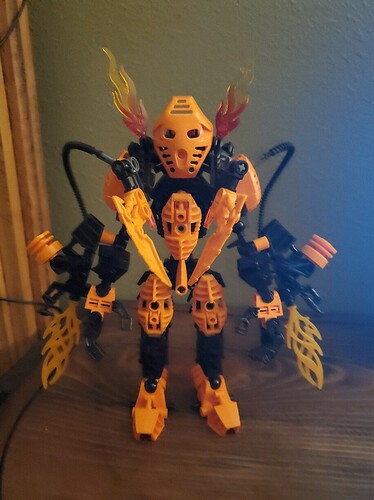 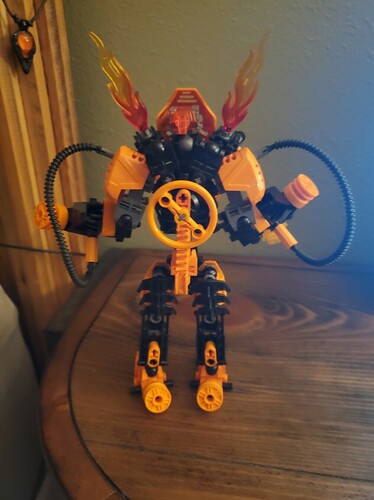 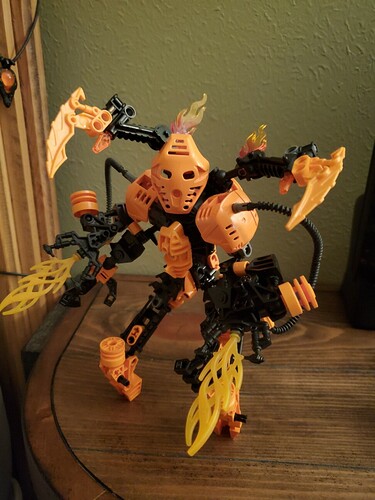 20220116_225706972×1296 230 KB
On to his Story:
Kaynak stared up to the void of space perched upon the protruding foot of the Great Spirit robot amidst an endless sea. It had been nearly a 1000 years with nothing to do upon this isolate spot. The area had become lush and tropical, but was uninhabited otherwise. Eventually Kaynak build a small shelter just to keep the rain and wind off him as he had no need for food or other organic beings needs.

Kaynak returned to his star gazing thinking over the centuries prior to his lone watch. He had seen so much in the Robots travels. His programing did not forbid his interaction with other species, but he never left the surface of the great machine. Over time his programing seemed to evolved giving him a since of life, but nothing beyond survival and carrying out his programmed duties. A thousand years prior he was in the lower abdominal region of the machine repairing a stress fracture on the Robots return to its lunch location when everything changed…

Kaynak was merely welding a stress fracture from the most resent departure as the Great Machine hurtle though space.

“Warning!” “Warning!” “Primary CPU compromised system disruption.”
Kaynak paused what he was doing and reviewed the message displaced across his internal visual hud.

“Odd, what was happening within the machine?” He connected to the internal sensors to find more warnings displayed. “Warning System failure, critical.” It was after reviewing each system shutting down that he knew things where bad. Then the thrusters sputtered and failed. The Machine hurtled unguided and uncontrolled though space.

Kaynak frantically search his internal processes for an order or response to this situation. However, none came, the machine remained whole and only process he saw was to complete his repair task. While the stress fracture was not catastrophic, if left alone it could result in a breach. Kaynak stared into the darkness in the direction of the Robots last recorded destination. He saw nothing.

“To Far.” The machine might make it eventually provided nothing disrupted the current trajectory. Then the machine groaned and veered to the side. Kaynak looked to see a large blue planet that they were now caught in its gravitational pull. Kaynak froze, calculating the velocity and trajectory of the machine as it hurtled to the planet uncontrol. In seconds he knew this would cause catastrophic hull damage. He scuttled up the machine reaching to the Robot’s head. His normal green eyes where black and vacant. Kaynak used system calls in his program to send a signal to the internal system. “CPU status dormant” that was both equally good and bad. While the machine was not dead, there was no one to control its descent.

Kaynak hurried to the chest of the machine to take refuge in his small pocket located there for planet entry. All awhile system warnings popped up one after the other. He made it to his space just as the machine began to heat from entering the planets atmosphere. Then Everything went black.

Some time later Kaynak awoke scrolling though the various warnings and repair calls needed from damage to the hull. He opened his hatch, preparing to leave to address the most critical problem. A breach on the lower end of the robot, where the stress fracture had been located. Then he was knocked back by a torrent of water. The compartment instantly filled with water. Kaynak felt the pressure of the water threaten to crush him and he swam to the surface. While he was insulated to survive the vacuum of space, prolonged submergence in water was not a design function and if submerged to long his systems would fail as well.

Breaking the surface Kaynak stared seeing nothing accept the foot of the machine protruding out of the water, his only place of salvation. He reached it and used his powers to internal heat his body to dry himself. Kaynak was alone and the machine was submerged. He was unable to reach the breach. So he waited, monitoring the machines system response as the years rolled by.

The Robot was critically failing, he knew unless the internal beings rebooted it everything would be lost. As the centuries past the Bohrak, awoke and then after a time fell dormant; and then he lost all connection. Sometime later the Bohrok came back online and his connection reestablished, what cause the interruption and reemergence was unknow to Kaynak, but their reappearance gave him hope.

“Hope” Kaynak did not understand the meaning, but it gave him an odd sensation of his purpose returning. However, the machines integral processes then began to shut down completely one by one, then everything stopped. Kaynak despaired, another sensation Kaynak did not understand, but then new life moved through the machine. The consciousness had returned… but it was different and Kaynak felt a new feeling, fear. As the Robot began to stir form its rest, Kaynak wondered what it all meant for him and his purpose.

I’d say it looks better with when the upper limbs are up. Also I enjoy the designs for the lower limbs, they definitely capture that flamethrower feel.

Ah yes very nice. I like the color combo, plus the backstory is rather interesting and fun to read.